Music industry legend has it that Lady Gaga, being a classically trained musician, writes many of her songs on the piano first. She’s undoubtedly not the only pop, or country, or rock star to use the keys to compose. And if you’re studying piano already, you might be itching to try your hand at your own songwriting.

Allow me to preface by stating that what follows is an old-fashioned method of writing with a pencil, piano, and staff paper. In this day and age, a songwriter has dozens of forms of technology to assist him or her. You can create music with computer software alone, through a keyboard connected to a computer, and even through free or low-cost apps.

How Do You Write Piano Music?

I’ve heard a lot of people talk about writing piano music like it’s magic—and sometimes it is, but usually it’s pretty simple. Once you start learning how to play piano, there’s a good chance that you’re going to want to start composing your own music.

You will just need to focus on the following steps: 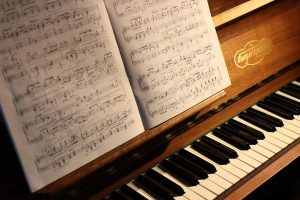 As you grow as a musician, you’ll develop your own unique process of songwriting, but here’s my personal process.

1. Decide on a general song idea.

What I mean is to decide on a theme, or perhaps an audience. For instance, you’d think, “I’ll write this one to my husband about our wedding,” or “This song will be centered on the political unrest in Africa.”

Sometimes it’s easier to consider the type of song you want to write before you consider the idea of the song. Do you want to write a country song or a jazz song? Classical or pop? Will it be a happy, upbeat song, or a sad, melancholic one? Deciding on these general themes ahead of time can help guide you as you dive deeper into writing piano songs.

2. Choose a melody and harmony.

Once you know, more or less, what you want to be writing piano music about it’s time to consider your melody and harmony.

The melody and harmony are both key elements of any good piano music. It doesn’t matter whether you use piano music writing software or apps – all good piano songs must have captivating melodies and harmonies. The genre and style don’t matter here!

The melody is the part of the song that’ easy to understand – it’s what you hum along to when you hear your favorite son on the radio. Usually, if it’s a song with lyrics, you’ll hear the lyrics most often in your head.

When you are writing piano music, know that the harmony is the prat that supports the melody line. These always are comprised of more than one note. They are read up and down instead of left to right, as melodies are.

Generally, harmonies are indicated by chords. A series of these chords together is a chord progression.

Each key and each tempo can affect listeners differently and are essential elements in what kind of atmosphere or mood that your song possesses.

Before you start playing around with keys and tempos, take the time to warm up. Here are some simple exercises you can do:

Play scales and chords in the keys that you’re comfortable with, then choose a key that feels like it fits the theme of what you’re conveying. Pick a tempo that matches your general song idea. Does what you’re saying call for high-energy, high-tempo music in the key of E (bright and cheerful), or does it call for a serene, slow ballad sound in the calm key of C?

This means the root chord (the chord that shares your key’s name), the dominant (the fifth chord above the root), the subdominant (the fourth chord above the root), and six chord (a minor chord). Some progressions, called the Nashville progression or the pop progression, consist of these. Let’s say that you’ve picked C major for your song. You’d play C, G, Am, and F. Play with fingers 1, 3, and 5 in both hands at the same time.

5. Play the chords in different orders.

Play four beats for each chord in the key and tempo that you’ve chosen, going from one chord to the next in different orders. For instance, play C for four beats, then G for four beats, then Am, then F, then C again. Go slowly and listen carefully. Mix it up and change it around! Start with Am, then F, then C, and end with G. You’ll eventually find a progression, or order, that appeals to you and fits the song’s theme.

6. Write down your progression and keep playing.

Take note of the order that you like best and then play it over and over, thinking about the theme that you’ve decided upon. If you’ve dedicated the song to your mom, then keep her image in your mind, or better yet, have a photo of her on your piano. Listen carefully to the chords and concentrate, and you may be able to “hear” lyrics begin to pop up in your head.

Every word, every style, phrase, every chord change should go down on that staff paper, even if you think they sound silly or they don’t sound good together. Something that sounds terrible today may sound great next week, or maybe even in another song that you find yourself working on down the road. Think of yourself simply as a reporter, jotting down what you’re hearing.

When you write down your music, keep it simple. Start each measure with the next chord change and make the first few pieces smaller in size. Every four or so measures is the perfect place to start!

One helpful tip for songwriting, which I learned in an online course from a professor of songwriting at the Berkelee College of Music, is to think of a great song unfolding like a small box that’s found within a larger box, which is found in a larger box still. The first box, or verse, that you open should give a general view of the world that you’ve created in your song. You can open with something general, just like you’re beginning an important conversation. In the second verse, reveal more. If you’re writing a song about a current issue or political statement, then the second verse could mean articulating your views more emphatically and clearly.

Now, remember, not every song has to have a bridge. Many songs don’t. But I think that it can be a useful element. It can break up a song if you’ve chosen to change keys for it or simply change the progression. But more importantly, the bridge can be the very climax of a song. Think of a ballad from a great singer, such as Whitney Houston or Carrie Underwood, and you’ll probably remember her big high note at the end of the bridge. This moment may be what takes your song from being pedestrian and simplistic to something really memorable. To build the bridge, try playing only the six and fifth chords, or the four and the second chords with two beats each.

Some songs may be written in a matter of minutes, like John Denver’s “Annie’s Song”, but most take a few days or weeks to polish. Over time, making notes and changes on the original staff paper, a final version will come together. Make a final draft on a new sheet of staff paper with lyrics.

Finally, remember that songwriting is a creative art. While I’ve laid out a formulaic method for how to do it, it’s important to know that it’s a method that’s meant to be bent and broken. The most important step of all in writing piano music is the K.I.S.S. idea: “Keep it simple, silly.”

Should I Use Piano Music Writing Software When I Am Writing Piano Music? 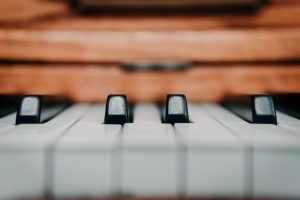 There are several types of software that you can use to write piano music. While these won’t necessarily help you come up with a brilliant idea or perfect that gorgeous harmony, they can help make the process of writing piano music a bit easier. The logistics will be taken care of for you so you can focus more on the creative aspects of writing piano music.

Here are a few of the top piano sheet music writing software programs to consider:

You might also consider a piano music writing app. Some of the best smartphone-friendly programs include:

Is it Hard to Write a Song on Piano?

It’s not necessarily difficult to write piano music, but it does take some practice! Once you get used to the steps, you’ll be able to create a gorgeous song quickly and easily.

However, for now, take your time when writing piano music– and consider our tips for writing HIT music as you’re getting started.

Heather L. teaches singing, piano, acting, and more in Saint Augustine, FL, as well as through online lessons. She is a graduate of the prestigious Westminster Choir College in Princeton, New Jersey, and has performed with the New York and Royal Philharmonics, the New Jersey and Virginia Symphonies, the American Boy Choir, and the internationally renowned opera star Andrea Bocelli. Learn more about Heather here!