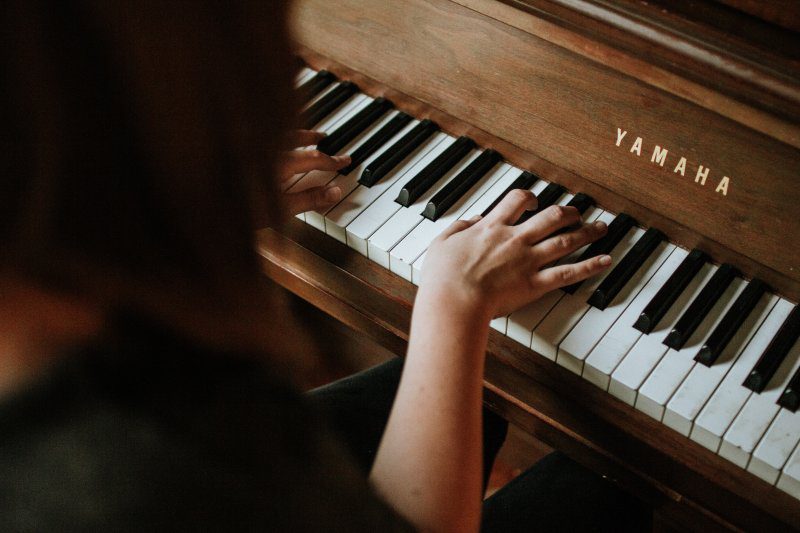 Don’t know what piano style you want to learn? Below, piano teacher Liz T. shares the five most popular piano styles to give you a better idea of what suits you…

Having the ability to play different types of piano music will help you become a better overall piano player.

What’s more, knowing the important composers, performers, and pieces of each piano style will assist you in your musical studies.

Below, I’ve listed the five most important piano styles, which include classical, jazz, musical theater, pop/rock, and liturgical.

What Are the 5 Most Popular Piano Styles?

Read through the various piano genres to learn more and see which one jumps out at you most.

After learning about each one, you should have an idea of which one you’re most interested in. If not, take the quiz at the end of the article to help you determine.

Throughout 1750-1820, classical piano was performed for royalty and the upper class in Europe. There were three main composers who paved the way for classical piano composition: Bach, Mozart, and Beethoven.

As the years progressed and classical music transformed from renaissance to baroque and romantic, other great pianists emerged, including Haydn, Chopin, Handel, Wagner, Debussy, and Tchaikovsky.

Classical piano is often what students study first because it forces them to have a very strong technique and knowledge of music theory.

Without having an understanding of the classical piano technique, it’s very hard to learn and pick up other piano styles. That’s because most music has stemmed from the classical style.

Just because classical music was popular many years ago, doesn’t mean it’s not thriving today.

There are many classical piano composers who are still performing music from the greats as well as creating their own classical compositions, such as the following:

Van Cliburn: Cliburn was one of the greatest American piano players of our century. Each year, thousands of piano players audition to compete in the “Annual Van Cliburn Piano Competition.”

Phillip Glass: Glass had an extensive career in writing, recording, and orchestrating classical music ranging from symphonic orchestras to the big screen.

Bach, Mozart and Beethoven are crucial composers to know as a classical pianist. I recommend having these books around when you to start learning this piano style:

1918 marked the big start of American jazz and it still remains one of the most popular piano styles. Pianists such as Scott Joplin, Jelly Roll Morton, and Fats Waller are piano players influential in building the jazz scene around New York, Chicago, and New Orleans.

At the time, jazz piano was a rebellious type of music, as it deviated from the classic rhythms, harmony, and technique.

People turned to jazz music during “The Great Depression” as well as in times of celebration.

It also became an important mark in history where African-Americans, Asians, Latinos, and Europeans were able to come together to create music in America.

While Joplin, Morton, and Waller paved the way for jazz piano, today’s contemporary jazz players are keeping it alive.

I suggest listening to some of today’s most well-known contemporary jazz players, including the following:

Michel Camilo: Camilo is a Grammy Award-winning pianist and composer from the Dominican Republic who specializes in jazz, Latin, and classical work.

Kenny Barron: An American jazz piano player, Barron is one of the most influential mainstream jazz pianists of the bebop area, currently on faculty at Juilliard School.

If you want to learn more about jazz piano style, then I suggest you check out these helpful books:

Musical theater pianists can find work performing in the pit bands of shows and can serve as accompanists alongside singers at auditions.

Listen to some of the old Broadway composers and lyricists for inspiration, such as Rodgers & Hammerstein, Rodgers & Hart, and Gershwin.

There are also many popular Broadway composers today–such as Andrew Lloyd Webber, Steven Sondheim, and Steven Schwartz–who have used piano primarily in their writing for musical theater.

You may also be interested in: 50 of the Best Piano Jokes, Quotes, and Puns

Below are some of my favorite pianists who’ve made a strong impact writing and performing musical theater:

Jason Robert Brown: Known for his works “Songs for a New World” and “The Last 5 Years,”  Brown uses incredible chords and harmonies. He has a knack for knowing how to capture both piano and voice together.

Marvin Hamlish: This legendary pianist served as the composer of one of Broadway’s longest-running musicals, “A Chorus Line.” Hamlish was very skilled at capturing dancers and the sound of the piano together.

Seth Rudetsky: An accompanist and radio talk show host, Rudetsky really knows how to work with singers whether it be for a cabaret performance, audition, or cruise ship!

If you wish to be a part of the Broadway scene, take a look at these essential books:

Starting in the ’50s, piano was incorporated in many popular pop and rock songs. In the ’70s, the keyboard was heavily introduced because of its cool electric sounds.

Being a contemporary rock/pop piano player and composer is no easy task, but is one of the most rewarding piano gigs around.

Pop/rock is one of the highest-paying piano styles around. As a piano player, you will probably find the most paid work, ranging from cover bands, wedding gigs, session recordings, and touring performances.

With this piano style, you’re free to explore new sounds, as the charts are always changing. What’s more, having the ability to both sing and play the piano looks and sounds great in performance.

Here’s a sample of some piano pop and rock players who’ve made a huge impact on the genre. Listen to these folks to get inspired and maybe pick up a few performance tricks.

Elton John and Billy Joel: Both of these music veterans hit the top of their careers in the ’70s and ’80s. However, they still continue to perform in sold-out stadiums today.

Alicia Keys: At the tender age of 16, Keys was already signed and recording her own original music. Her piano chords and melodies are in sync with her original vocals and lyrics.

Carole King: One of the most powerful women in songwriting, King is a singer/pianist from New York who’s written and recorded some of the most influential pop music of our time.

There are tons of really great piano pop/rock books available. Below are just a few helpful piano books that will guide you:

Liturgical music originated as a part of religious ceremonies ranging from Catholic to Protestant to Jewish.

Almost every religion has its own unique sounding liturgical music that plays an important and meaningful role in its culture.

Liturgical music has been passed on from generation to generation, and today musicians are still performing and composing new music for religious services, performances, and recordings.

The piano is able to serve in all the various types of religious music. Many pianists start out by playing religious services professionally to make their living as a musician.

The composers and pianists below are influential in the liturgical music genre.

David Haas: An influential pianist and composer of the modern-day liturgies in the Christian community.

Hector Olivera: An internationally acclaimed organist, watch his technique and how he brings the organ to life.

Jason White: White is a leading musical director and performer. He plays primarily gospel music on the piano, keyboards, and organ.

If you want to learn how to play this piano style, then check out these helpful books for beginners:

I hope this guide to the five most popular piano styles will help determine what style you want to learn. Talk with your piano teacher about ways you can practice whatever piano style you choose.

If you’re still unsure which piano style to choose, take this fun quiz to find out!

Post Author: Liz T.
Liz T. teaches singing, acting, and music lessons online. She is a graduate of the Berklee College of Music with a B.M in Vocal performance and currently performs/teaches all styles of music including Musical Theater, Classical, Jazz, Rock, Pop, R&B, and Country. Learn more about Liz here!