Do you love singing rock? Here, voice teacher Molly R. shares her recommendations for four singers to check out for rock singing… and four more you can learn from!

When you think about impeccable vocal technique, it’s not often that a rocker comes to mind, is it?

Usually we’re praising the beautiful tone quality, high notes, and volume of an opera singer, or perhaps a jazz or musical theatre vocalist. Rock singers are usually known for their larger-than-life personalities and stage presence over anything else.

That doesn’t mean that there aren’t rock singers out there with amazing, healthy voices. Au contraire!

What is Rock Style Singing? 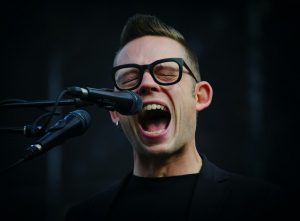 All kinds of singing share certain commonalities and basic traits. However, rock singing is usually marked by the following characteristics:

Of course, these aren’t the only things that make rock singing so unique – but they are some of the most common characteristics of the genre.

Here are some more tips for singing rock vocals: 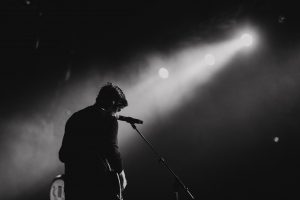 Curious about what it takes to be considered a great rock singer?

Some of the singers listed below are on par with many opera divas and divos as far as technique is concerned; their style just happens to be totally different!

Here is a list of vocalists with great rock singing technique:

Now here is my absolute favorite singer of all time — Ann Wilson of the rock band Heart. Yes, I may have studied classical singing but let me tell you, if I had a choice to sound like Renée Fleming or Ann Wilson, I’d definitely choose to sound like Ann!

There’s a reason why they call her the “female Robert Plant.” What a powerhouse she is! First of all, this dynamic performer is in her 60s and sounding better than ever. This is an indication that she has been using reliable vocal technique for decades. She can let loose with killer forte phrases and it sounds powerful, never forced. Why? She connects with her body and doesn’t squeeze her throat!

Ms. Wilson has also studied voice formally to keep herself in good vocal shape. Obviously it’s worked as she has enjoyed a very long career and is still going strong with absolutely no signs of slowing down.

Mr. Cornell has a rich baritone rock voice that is the envy of many male singers! Although there is only one Chris, male rockers can take a cue from him by taking voice lessons (he studied with the same teacher than Ann Wilson did, in fact!).

In the video below, listen to him singing something fairly unexpected — a ballad! With great vocal technique, a rocker should be able to switch gears and sing something like this with more sensitive phrasing. If you push and scream your way through your rock singing career, you’ll simply shred your voice. Don’t you want longevity, like Chris?

Pat Benatar is another rocker still going strong in her 60s! Fun fact: She studied classical singing as a young woman and was even offered a spot at Juilliard. Although she chose the rock route, having a reliable vocal technique has kept her singing big rock songs for more than 30 years.

Here she is singing “Heartbreaker” fairly recently. Notice she still has a very clear and powerful tone, especially through her middle range. Long phrases and big notes are no problem for this lady: with her classical training she knows how to support!

He may no longer be with us, but his amazing rock voice lives on!

Frontman Dio never actually had any formal vocal training. However, he did study as an instrumentalist, and has claimed that his time as a trumpet player gave him excellent breath technique. Not only that, but he loved to listen to opera from an early age.

Clearly the breathing he learned as a trumpet player built up his lung capacity and allowed him to hit full, high notes with ease again and again. He was known as one of the best metal singers ever, and I think you can hear why. This song requires lots of stamina — he’s staying in his upper register for most of it! 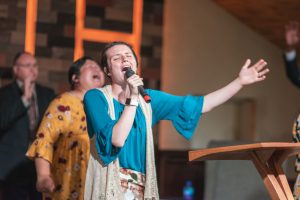 Now, what about rock singers who… well… don’t have the greatest technique? There are a few that stand out.

Billie Joe Armstrong of Green Day has an extremely nasal sound. It always sounds like he is singing completely congested! This is due to the fact that he is not singing with any sort of open throat technique to make a more pleasing, ringing tone. This happens when the soft palate is not raised. Listen here:

Lita Ford had better success as a top guitarist, and to me it’s clear why. Although her big hit “Kiss Me Deadly” is a great song, I can’t help but wonder what it would sound like if she sang it out a bit more fully, rather than yelling or talking-singing most of it.

Remember, there ARE healthy ways to “scream” in rock — but you better find a teacher who specializes in this technique to guide you through it!

In the video below, Sheryl Crow is lacking some serious support, putting out a wimpier, airier sound that’s fairly common in pop and rock. If Sheryl trained with good old-fashioned staccato vocal exercises to strengthen her diaphragm, she’d be sounding a LOT more powerful! She needs to sing with more lower body.

Eddie Vedder has what I’d call an…. interesting sound. More specifically, he is covering! This means he is manufacturing his sound to make it sound darker in tone (usually this happens when the tongue is in the way). In reality, the audience just hears garbled, muddy sound. If one of his main articulators (tongue) is always in the way, no wonder we don’t understand a word he’s singing! 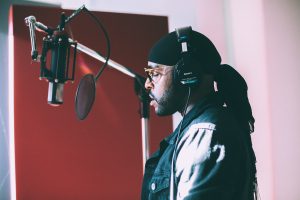 Here are a few rock singing techniques to try if you want to become the best of the best.

Focus on Beat and Rhythm

The most important step in singing rock is knowing how to time things right. Listen to a few classic rock songs to get a handle on how the pros go about things. Make sure you know the difference between the beat and the rhythm and then work to perfect both!

Many singers assume that they need to sing as high as possible to train the upper part of their range. While high notes can add a lot to a song, you need to remember that singing high isn’t appropriate at all times – or for every singer.

Work on expanding your vocal range and on mastering a variety of vocal timbres and qualities.

Vocal distortion includes unique elements like screams, growls, moans, and other effects. This grabs the listener’s attention and can add a lot of interest to a song.

Diaphragmatic singing is important if you want to be a rock singer. Rock singing is one of the most physically demanding styles – it takes a lot of energy to run around that stage and belt out the tunes! Don’t be afraid to project, but when you do, use that diaphragm so you don’t overtax yourself.

The vocal fry is a technique that will let you sound gritty and husky without killing your voice. Once you master it, you can use it on emphasis words (rather than full sentences or phrases) to give your rock singing a new flair.

The Glottal Attack is a technique that involves the vocal cords hitting together when you sing to produce an “ugh” sound as you start your notes. It can give any rock song a bit of added emphasis! Don’t overuse it but instead just try it on words you want to emphasize, like in chorus sections.

Use Your Entire Body

Your body is your instrument when you’re a signer – so don’t be afraid to use it! Move your entire body as you sing and make sure each movement and word is deliberate. Blend your head and chest voice together for a strong mixed voice.

Connect With Your Own Emotions

Here’s what sets the good rock singers apart from the great ones – the true greats have the ability to really connect with their emotions. Be raw and be vulnerable – that’s the best thing you can do to improve your rock singing. 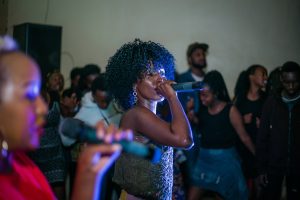 While you are working on improving your rock singing with the techniques described above, make sure you’re also working hard to avoid some common mistakes.

How Do You Do Rock Vocals? 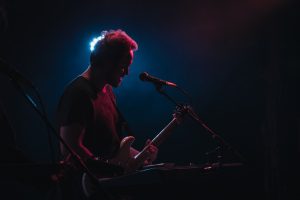 There are a few ways you can improve your rock singing abilities.

One is to perfect your voice. Work on gaining control of your “instrument,” aka your voice, and practice your licks, vocal runs, and other techniques. Often, getting good at rock singing is less about having some innate talent and instead about doing a lot of practice to strengthen and improve one’s voice.

Do your best to prevent voice damage by resting when needed, drinking water, and taking advice from other singers. Work on avoiding the easily-avoidable mistakes described above, and of course, take advantage of singing lessons.

Do you have aspirations to be a strong rock vocalist? There are many teachers on TakeLessons who can help you achieve your goals! Find a singing teacher near your or online, and he or she will work with you to build a solid and reliable vocal technique — no matter what style it is that speaks to you!

Want to learn more about rock singing techniques? Check out our Ultimate Guide to Singing Styles and Genres! 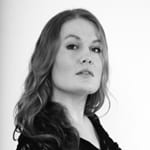