When you look at the keys on a piano, a few things pop out right away. First, there are both white and black keys, and second, there is a distinct pattern that the keys repeat. While most modern pianos contain 88 keys, you can find pianos with a shortened range, and even some that increase the number!

But why, exactly, are the piano keys set up like that? We’ll explore that in this article.

A standard piano has 88 keys, with 52 white keys and 36 black keys. However, there are some exceptions and more details to note:

Once you know how many keys to look for, you can start getting familiarized with the rest of the instrument. Taking piano lessons with a qualified instructor is one way to brush up on your understanding of the keys, but you can also watch videos and tap into other resources, too.

Here’s a video with more details on piano notes and keys:

Why Are Piano Keys Arranged That Way 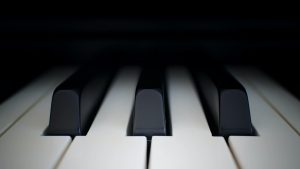 If you’re just learning how to play the piano, it’s important that you read all the information you can find so that you can be a fantastic pianist. Here are some things you need to know about your keys!

What Are the Keys on a Piano Called?

That said, you might be wondering if there’s a more technical name for both. There isn’t, but white keys do have their fair share of nicknames, including “naturals” and “ivories.”

And what are the black keys on piano called?

Sorry to disappoint you, but the black keys don’t have much of a name. They are sometimes called “accidentals,” since they usually form sharp or flat notes, but this is somewhat inaccurate, as white notes can also occasionally serve as sharps and flats, too.

White and Black Keys On a Piano: How Many Keys on a Piano?

How many keys does a piano have? The number of keys on piano varies, but usually, there is a set number of both black and white keys.

How many white keys on a piano? Usually, there are 52 white keys. And how many black keys on a piano? Typically, you’ll find 36. If the piano doesn’t have the full 88 keys, the number of keys for the black to white ratio will decrease proportionally, with one octave equalling seven white keys and five black keys.

Pianos are arranged with white keys for the musical tones of A, B, C, D, E, F, and G. The black keys fill in the gaps for the remaining half-steps, which are notated as sharps or flats as a key signature or accidentals within the piano music.

You’ll get to know the keys on piano as you practice scales, to begin with. The C scale, for example, is played without any sharps or flats. That means that all of the notes are played only on the white keys. Other scales include some of the black keys, depending on how many sharps or flats are in the key. For instance, the key of D has two sharps in it, F sharp and C sharp, which are played on the black keys.

What are the Key Notes on a Piano?

Of course, there are flats and sharps between these natural notes, too.

Regardless of how many keys there are, this pattern will repeat itself as you go up and down the keyboard. They run in alphabetical order from A to G. Easy enough to remember, right?

Octaves on the Piano

How many octaves on a piano? Pianos were first designed based off a harpsichord layout, which had five octaves. Then piano makers increased to six octaves and later to seven full octaves, at the request of composers who wanted to use a larger range when writing piano music. The standard 88-key piano was created in the late 1800s, adding four keys to the layout that you can recognize on any full piano today.

The pattern of black and white keys on piano is repeated every 12 notes. This includes seven white keys and five black keys. This pattern is called an octave. On a standard 88-key piano, there are seven octaves plus a few more keys at either end. If you consider an octave to begin at C, then there are three keys in the “zero” octave at the very low end, and one key in the last octave at the high end.

How Many Keys Does a Piano Have?

If you’re wondering how many keys on a grand piano, for the most part, it will usually be the full 88.

As far as the number of keys on a piano of other types (like an upright piano, baby grand, or keyboard) – the answer to this question can vary.

For instance, there are many practice keyboards with fewer than seven full octaves. A shortened keyboard may only contain five or six octaves. There are also piano makers that have extended the range to over 100 keys! In either case, the middle C note sounds exactly the same; the octaves are simply shortened at the low or high end.

Why would you want to have fewer or more keys than standard? If you want to have a keyboard to practice on between your piano lessons, but space is limited, a shortened model gives you the opportunity to practice without taking up quite as much space. Conversely, some piano pieces are written for a greater range than the standard layout, which requires a piano with more than 88 keys.

There is some speculation that pianos could have even more than the current limit, but that comes at a cost — both a monetary cost, as well as a limitation on the range of human hearing. With 88 keys, a piano already hits close to the extent of the human ear. More keys can increase the range of the composition, but may test the limit of what the audience can actually hear.

What are Weighted Piano Keys?

Keys are made in a number of styles and with different weights. Some keys are weighted and some are not, with some made from wood and others from synthetic ivory plastic, or other materials (which can all impact the weight).

The weight makes a big difference. Traditional uprights have a hammer action system while electric pianos have a range of weights and actions.

These different weights make a difference in the sound, with unweighted keys being a better choice for children who have small hands and might have a hard time applying enough pressure to the keys to make a sound.

How to Clean Piano Keys

To clean your keys, all you need to do is wipe them down with a bit of water, a small amount of vinegar, and some soft cloth. Use an undyed cloth to avoid staining the keys and don’t let water drip between them. Use a dry cloth to buff.

If your piano keys are ivory, know that they will yellow with age and should just be cleaned with a bit of dishwashing detergent. Regardless, the yellowing will not go away – it’s something to live with!

The Key to Becoming a Better Pianist 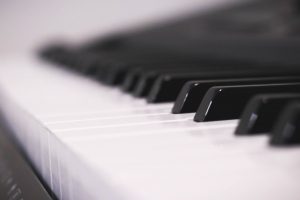 Understanding the keys is essential if you want to be a great player. Hopefully, this post has given you all the information you need to improve!

If you’re still curious about the way the keys are laid out, feel free to ask your piano teacher at your next lesson. He or she will likely have a lot of knowledge about how a piano works. The more you know about your instrument, the better musician you’ll become!