Have you ever wanted to learn how to play the piano, but felt intimidated by all of those black and white keys? You’re not alone! The piano keyboard layout can be tricky for beginners to understand.

Fortunately, this helpful guide will make learning the basics a breeze. By understanding the layout of the keyboard, you’ll be able to start playing simple songs in no time. So what are you waiting for? Let’s get started!

Did you know that understanding the full piano keyboard layout is not as complicated as you might think?  As in the study of music theory, the keyboard itself is very intentional, mathematical and consistent.  First, we need to understand the various types of pianos themselves, and identify the music alphabet. Then, we’ll take a look at the layout and structure of the keys and how it relates to the grand staff.

What Order Do Piano Keys Go In?

The order of the piano keys is a reflection of the organization of tones and half-tones into octaves. Here’s some more information:

This numbering system can be misleading, as it does not indicate the pitch of the notes. In reality, the order of the piano keys is more closely related to their frequencies than their numerical value. When learning to play the piano, it is important to memorize both the order of the keys and their corresponding pitches.

Here is a video to teach you a little bit more about piano keys and the piano keyboard layout:

So, Just Where Did the Piano Keyboard Layout Originate? 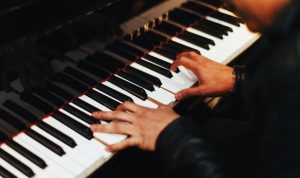 The piano was invented around 1700 in Italy by harpsichord maker Bartolomeo di Francesco Cristofori and was literally called “a harpsichord with loud and soft.”  The name changed to pianoforte and finally shortened to just piano.

This invention was truly a game changer. Finally, a keyboard instrument could produce volume changes. That’s because of the construction of hammers and strings, as compared to the harpsichord, where the strings were plucked.

There are 2 categories of pianos: upright (or vertical) and grand. The upright pianos are more compact and fit easier into most homes. And more modern upright pianos are very similar in tone and responsiveness as grand pianos.  There are various sizes available, which include spinet, console, and studio. Spinets are the smallest, consoles are the most common, and studio pianos are the tallest. In addition, digital pianos or keyboards are becoming a more versatile option for families, due to their cost and size.

Since their inception in the 1980’s, electric keyboard pianos have improved dramatically to include weighted keys, MIDI, and other instrument tones. They don’t require tuning, don’t cost as much. and they’re portable. However, the touch, feel, and sound of a digital piano does not compare to its acoustic counterpart. As a piano teacher, I often allow students to start out taking lessons on a keyboard or digital piano, but recommend they switch over to an acoustic when they are able.

Let’s Take a Closer Look at the Piano Keyboard Layout

When you take a look at the keyboard itself, you will notice the two colors – white and black.  The white keys continue up but the black keys are in groups of two’s and three’s. This is the very first pattern we see in piano lessons, and makes it easier to identify notes based on where they are in relation to the two different groups of black keys. The black keys are actually the sharps and flats of the white keys.

But don’t be fooled, the white keys can be sharps and flats too. This occurs where two white keys are together. For a sharp key, we move a half step up and for a flat key, we move a half step down.  In addition, keys have two different names as well!  For example, A# is the same key as Bb.  They are enharmonic equivalents. The trickier equivalents are like Cb and B because we don’t always think about the two names of keys when the two white keys are together. Piano teachers often keep this secret until later on in the lessons so as not to confuse students.

Resources to Help You Learn the Piano Keyboard Layout

Struggling to learn the piano keyboard layout for beginners? Check out these resources:

What is the Piano Keyboard Layout? 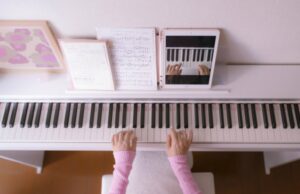 The piano keyboard layout refers to the arrangement of keys on a standard piano. This design is a grid of 88 black and white keys, each of which corresponds to a different note on the musical spectrum.

The layout of the keyboard can be divided into two main sections: the white keys, which are made up primarily of semitones, and the black keys, which represent more substantial leaps in pitch.

Depending on which musical piece you are playing, you will either use clusters of white or black keys to produce notes with varying degrees of intensity and rhythm. Given its unique design and wide range of musical applications, the piano keyboard layout has become one of the most important musical instruments in history.

In general, the right hand plays higher notes and the left hand lower notes.  As students move on in their repertoire they have a lot of fun when either both hands are low or both hands high or even crossed hands!

Even though a full size piano keyboard has 88 keys counting white and black keys, it does not have 88 different note names. The music alphabet is only A-G.  So, what are all the other key names?  Well, it just keeps repeating.  Students love to start at the bottom and play the first key A and name each white key going up in order from A-G and repeating until they reach the top key which is a C.

The high and low sides of the keyboard equate to the top and bottom of the grand staff.  In music, our notes are usually written on 5 lines and 4 spaces called a staff.  When we put two staves together, it is called a grand staff with Treble (RH) on the top and Bass (LH) on the bottom.

In most written music, there is a wide gap between the treble and bass staves and most students think there are a lot of notes in between. However, in reality there are only 3!  The top space of the bass staff is B.  The added line in between the two staves is Middle C and the space under the treble staff is D.  These correspond with the Middle C we found on the keyboard and it’s neighboring notes B and D.

How to Find Chords on the Piano Keyboard

A chord is simply two or more notes played together. If you know how to find chords on the piano keyboard, you can play a wide variety of music.

The first step is to familiarize yourself with the layout of the keyboard. The white keys are the natural notes, while the black keys are the sharps and flats.

Next, identify the note that you want to use as the root of your chord. This note will be the starting point for finding the other notes in your chord.

To find the next note, count up four half-steps from your root note.

For example, if your root note is C, then counting up four half-steps would take you to E. The final note in your chord would be G, which is another four half-steps above E.

By following these steps, you can quickly and easily find chords on the piano keyboard. With a little practice, you’ll be able to play your favorite songs in no time.

Some Basic Chord Progressions for Beginners 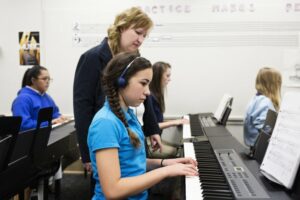 As any musician knows, chords are the building blocks of music. By combining notes in different ways, chords create a rich palette of sounds that can be used to express a wide range of emotions. For beginners, however, forming chords can be a challenge. To help get you started, here are some basic chord progressions that you can use to play a variety of songs.

This progression is made up of three minor chords, and it’s often used in jazz and classical music. To play the ii-V-I progression, start by playing the second chord for two bars.

You can find even more piano chord progressions – and tips on how to play them – here.

Understanding the Piano Keyboard Layout is an Important Skill 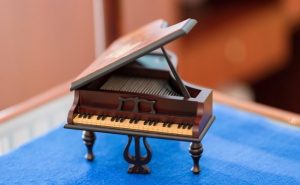 Having a clear foundation, and knowing the layout of the keyboard is important. It’s also important to understand how it relates to the music alphabet and the staff. These are vital concepts, and you’ll probably spend many lessons on these topics.

Hopefully, this article will take away any mystery or complexity. And you will enjoy learning and playing piano for years to come.

So now that you know a little bit more about the layout of the piano keyboard, go ahead and try out these tips. Experiment with different hand positions on the keyboard and see what feels most comfortable to you. Consider taking piano lessons to help teach you the ropes.

Start with basic scales and arpeggios in different keys until they feel easy and natural. And finally, take your time when learning new pieces – there’s no need to rush! With a little practice, you will be playing beautiful music on the piano in no time.