Do you want to sharpen your jazz piano skills? Below, piano teacher Jason B. shares five jazz piano exercises you can do to bring out your inner jazz pianist…

Jazz is one of the few piano styles that allows total creative freedom. Expert jazz pianists reshape not only the rhythms and melody of a song, but they are also given a solo section that allows them to create new melodies on the spot.

While this creative freedom is liberating, it also can be overwhelming when you’re just starting out as a jazz pianist. Below are five jazz piano exercises to start shaping your skills as a beginning jazz pianist.

Note: These jazz piano exercises assume you have basic music theory knowledge (such as scales and being able to read music) along with some basic piano experience as well.

A 2­5­1 is a short chord progression that happens very often in jazz piano. Some jazz standards, such as Giant Steps by John Coltrane, are entirely 2­5­1 chord progressions changing from key to key during the song.

Building chords off of those scale degrees gives us those chords and chord quality (such a minor 7th, dominant 7th, and major 7th).

While advanced or intermediate jazz pianists might be playing 4 note voicings of the chords, since we are just beginning we are going to learn using 2 note voicings.

We build these chords using the 3rd of the chord, and the 7th of the chord. If you do not know what this means, this lesson might be a little advanced for you. Included below is a link with musical notation showing this concept.

If you follow along on the practice guide sheet, you can see in a Dm7 the 3rd is an F, and the 7th is a C. When you move to the G7 chord the F becomes the 7th of the G chord, but you must change the other note from C to B to become the third.

Finally, the B stays this time becoming the 7th of the Cmaj7 chord, while the F must turn into a E which is the third.

This might sound complicated, but print out the sheet and try to follow along with it. What you’ll find out is that you simply start the chord and then move one finger, and then the other to complete the other two chords.

The other good news is that since we will be using the thumb and the middle finger of the hand to the play the chords, we are setting ourselves up to be easily prepared for 3 note and 4 note voicings in the future.

Your left hand should be playing the root of the chord to give a foundation to the harmony. The hardest part is just knowing where to start, and that is why running this 2­5­1 practice chart will make you a better jazz pianist!

Thankfully, there’s a trick to this madness. You can play the major scale of the 1 chord over the entire 2­5­1 progression. That means if you are playing a 2­5­1 in the key of G (Am7, D7, Gmaj7), you can just play G Major the entire time.

The reason this works is because the scales needed for the minor chord (which is called Dorian) and the dominant chord (Mixolydian) are actually called modes. These modes relate to the major scale by containing the same notes, they just start on a different scale degree.

Now that you’ve been practicing your scales and chord progressions so vigilantly, you’re ready to start some improvising.

You simply will pick a 2­5­1 progression and play either the root of the chord in the left hand, or the two note voicing you learned earlier if you have a backing track or software (refer to exercise 5).

Explore the different combinations of notes you can make within the scale. Explore leaving the scale through passing tones between two scalar notes.

This is your time to be an explorer and figure out what you personally like. Remember there are no wrong notes in jazz, there are just better choices. Don’t be afraid to experiment and fail, this is where you become better.

The Real Book plays a vital role to any jazz pianist. It contains the sheet music for songs that we refer to as standards. There are many different versions of the Real Book, however, the one I personally use  is Hal Leonard’s “The Real Book 6th Edition.”

The book has around 400 songs with proper chord changes and melodic lines notated. The format of the songs in notation is what we call a Lead Sheet. A Lead Sheet has the chord structure and melody of the form of the songs. In jazz, we call the first time through a song while playing it’s melody the head.

After you play the head, you still repeat the chord changes of the song but you improvise a new melody of your own over the changes. This is called the solo section.

Finally, you replay the head one more time after you play however many times through the song you felt like soloing. This is the standard format of a jazz song and the Real Book will give you the proper information needed to play these songs.

Backing tracks, or backing track software, are two options when nobody else is around to play with. Backing tracks sound great, and are recorded by amazing musicians. For example, Jamey Aebersold sells books with cds included that you can play along with.

The upside is they sound great because of the talented musicians. The downside is they are usually only in one key and tempo. If the song is difficult, you might have to work up to the speed on the track, making it useless.

The other option is backing track software, such as iReal Pro (for phones, tablets, and computers). iReal Pro for is a great piece of software, which you can edit chords, tempo, time signature, and even keys!

You can set the song to be as slow as you need it to be, which is great when you’re first learning a song. You can individually change the volume of every instrument in the backing track it makes.

You don’t even have to manually enter in the standard you’re working on because it connects to a special forum where you can download 2000 jazz songs off the bat. Using this software makes practicing a whole lot more fun, because it is the next best thing to jamming with a band.

If you practice these jazz piano exercises for even five minutes each a day, within weeks you will be astounded with how much you have grown.

The secret to good practice is consistency not duration. You might even surprise yourself. There have been many times where I have sat down to practice soloing and had so much fun I noticed hours have passed.

Good luck to you on your journey through this wonderful genre of music we call jazz! 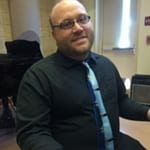 Post Author: Jason B.
Jason B. teaches piano and music theory lessons in Vista, CA. He is currently finishing up his Jazz Performance BA at Mira Costa College and his BA in Music Education at San Diego State University. Learn more about Jason here!

One thought on “5 Jazz Piano Exercises for Beginners”