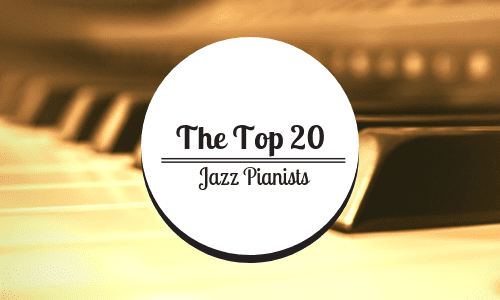 Narrowing down a list to just 20 of the best jazz pianists isn’t easy, as there are plenty to choose from. Creative geniuses such as Art Tatum, Count Basie, and Thelonious Monk are just a few of the names that come to mind, among many other greats in jazz’s rich history.

Although most people think of trumpeters or saxophonists when they hear the word “jazz,” the piano has played a crucial role in the development of jazz theory and performance.

Acting as both a solo and ensemble jazz instrument, the piano has important contributions to make in the areas of rhythm, harmony, and style. Some even consider it the backbone of jazz ensembles – as crucial as the double bass that outlines the harmonic figures, and the trumpet that riffs and solos on the melody.

Perhaps what’s most incredible is how jazz piano has supported the evolution of jazz over the decades, from ragtime to bebop to swing and more. If you’re ready to place your finger on the lively pulse of jazz, read on for a compilation of the greatest jazz pianists, ordered by era.

Scott Joplin’s style represents the earliest precursor of jazz, in the form of the classic ragtime. Born around 1868 in Texas, Joplin’s works inhabit a unique space where classical music and African-American styles, such as work songs and gospels, converged.

The unique sound of ragtime, with its syncopation and joyful melodies, can’t be mistaken for anything else. Joplin’s greatest hit, “Maple Leaf Rag,” epitomizes the genre. His compositions had a classical quality to them and weren’t intended for improvisation, unlike other forms of jazz that would follow.

A few decades after Joplin’s birth, the pianist who came to be known as “Jelly Roll Morton” was born into a family of proud Creole heritage in New Orleans. His colorful stage name was invented to mask his family name, when he took a job playing piano in a brothel.

Morton acted as a pianist, bandleader, composer, and arranger. He is firmly rooted on the map of jazz piano, thanks to his works which embrace ragtime and early jazz. While his claims to have invented jazz have never fully been proven, it’s certain that he is an important figure who left us with many spirited compositions.

Willie “The Lion” Smith, born in 1897 in New York, moved jazz one more step forward, to the “stride” style – involving rapid, rhythmic alterations in the left-hand accompaniment. This style became popular in the 1920s and 30s.

Willie’s birth name was actually, William Henry Joseph Bonaparte Bertholoff Smith, chosen to represent all parts of his rich family heritage. A highly influential figure, Willie is one of the best jazz pianists of all time because of his skillful and virtuosic artistry.

Duke Ellington certainly pulled his weight as a bandleader, but he was much more than that. He also wore the hats of composer and pianist. Alive from 1899 to 1974, he had a prolific and lengthy career which included over 1,000 compositions.

Ellington’s career wasn’t just a solo performance. His strength originated from his use of a big band, or orchestra, which featured dedicated musicians of the highest quality. Born in Washington D.C. and passing much of his life in New York City, Ellington is widely celebrated as a quintessential American jazz musician.

A fabulous pianist who made a mark on jazz history, Earl Hines was someone who truly captivated his listeners. Hines, born in 1903 close to Pittsburgh, had a big band with which he performed.

Yet his artistry was so strong, his piano playing alone contained everything needed for a meaningful, stylized jazz performance. He’s still recognized today as the father of modern jazz and as a huge influence on numerous famous jazz pianists.

Only a year after Earl Hines entered the world, Fats Waller was born in 1904 in New York City. Waller’s career was full of surprises, twists, and turns. His artistry spanned many different genres including comedy, organ, and singing performances.

An entertainer at heart, his most popular works still hold a place in listeners’ hearts, with compositions like “Ain’t Misbehavin’” and “Honeysuckle Rose” never going out of style. Waller was a popular and well-liked artist with a sense of humor, and his music had no limits—he played jazz and Bach on the organ.

Count Basie is a classic – his style is timeless, and the sound of his piano playing at the center of a big band, unmistakable. Born the same year as Fats Waller, Count Basie is most well-known as a bandleader, but his leading was done from the piano. Thus, the two roles of pianist and bandleader are both integral to his identity.

Count Basie knew how to make a big band swing! While he made the big band sound popular, he is also known for shining a light on the rhythm section, with the piano at the centerpiece of the tight-knit group.

Tatum heralded a new age of genius in jazz. He was ahead of his time, a devilish improviser and a technical wizard at the piano. Taking cues from his predecessors, Waller and Hines, Tatum had an especially unique life as a visually impaired musician.

He melded the styles of swing and stride, inventing creative improvisations that surpassed anything heard until then. Born in Ohio in 1909, Art Tatum went down in the history of jazz, and for good reason!

Inimitable in personality and musical style, Thelonious Sphere Monk was in a class of his own. His music was and still is widely recorded. His style at the piano is highly unusual, featuring dissonances and dramatic, unexpected changes within a piece.

He was born in North Carolina in 1917 but spent most of his childhood in New York City. Monk’s legacy lives on in the form of albums and tributes, as well as an institute established in his honor, which supports jazz education in public schools.

Hank Jones was a product of Earl Hines, Fats Waller, and Art Tatum, among other greats who influenced him. He was a versatile and admired pianist, bandleader, arranger, and composer, and his career included more than 60 albums.

He also collaborated with well-known musicians like Ella Fitzgerald and Charlie Parker. Jones was particularly known for his usage of advanced harmony, and many described his artistry as “impeccable.”

Extremely popular with the public, Nat “King” Cole’s infectious melodies and vocals will never be forgotten. Expanding beyond the sphere of jazz, Nat King Cole also appeared in films and had his own television series.

While his music itself was plenty noteworthy, his life was also remarkable, as he personally experienced a high degree of racism as a black musician born in Alabama in 1919 and going on to perform in the southern states of the US.

A contemporary favorite, Dave Brubeck arrived unexpectedly at the piano, after first attempting a formal course of study in zoology. Born in 1920 in California to a pianist and a cattle rancher, Brubeck went on to forge a diverse musical style, encompassing experimental techniques and out-of-the-ordinary meters, rhythms, and harmonies.

His work is perhaps best represented by his ensemble, the Dave Brubeck Quartet, which he established the same year that he suffered a debilitating surfing injury. He left behind a vast musical legacy, and four of his six children are professionally involved in music.

Bud Powell signaled a new era in jazz piano: bebop! Known for his compositions and creative harmony, Powell followed in the footsteps of his pianist father. He also admired Art Tatum and Thelonious Monk.

Bill Evans, along with several other famous jazz pianists, would later follow in Bud Powell’s musical footsteps. Powell struggled with mental health and drug abuse, which unfortunately was not uncommon in the bebop scene of this age. Alive from 1924 to 1966, Bud Powell’s music led jazz piano in a new direction.

Hailing from Canada, Oscar Peterson came from a vigorous, disciplined classical background, with the habit of four to six hours of daily practice. Soon fascinated by boogie-woogie and ragtime as an adolescent, Peterson is well-known for his diverse style, melding jazz and classical, as well as his work in small ensembles.

Originally from New Jersey, where he was born in 1929, Bill Evans is known for his harmonic prowess at the piano, as well as his collaborations with other famous musicians like Miles Davis and Chet Baker.

A prolific musician who deeply valued his collaborators, Evans was known for his superb work in trios. His music-making involved new harmonies, unique interpretations of old standards, and masterful melodic lines. Evans’ legacy influenced many famous jazz pianists to follow.

Born in Pittsburgh in 1930, Ahmad Jamal valued his connection to the city throughout his life. His relationship with music started very early, as he found himself at the piano at the young age of three.

Jamal’s career has spanned many decades and he is best known for his innovative style of music making, called “cool jazz.” While he was inspired by bebop, his style diverges into his modern interpretation of jazz.

Born in 1938 in Philadelphia, McCoy Tyner’s career was defined by his contributions to the John Coltrane quartet. He ultimately used these experiences as a jumping-off point, continuing to innovate even after leaving the quartet due to stylistic differences.

Tyner made several contributions to modern jazz piano, including his approach to chord voicing and his unique voice expressed through his melodic interpretations.

Herbie Hancock is a versatile jazz musician who joined Miles Davis’ Quintet at the young age of 23. Hancock was born in 1940 in Chicago and demonstrated exceptional talent in classical piano as a child. He was fundamental in establishing another evolution in jazz history: post-bop. Hancock’s music is extremely experimental with eclectic influences.

Chick Corea has enjoyed a long, distinguished career. Born in 1941 in Massachusetts, Corea draws on a lineage of famous jazz musicians, including Dizzy Gillespie, Charlie Parker, and Bud Powell.

His style evolved over the years, from avant-garde to jazz fusion to contemporary classical music. Corea is also well-respected for his musical collaborations with other artists, including contemporary Hancock.

Keith Jarrett, born in 1945 in Pennsylvania, is a multidisciplinary performer, equally devoted to jazz and classical music. Found to have perfect pitch, he was extremely accomplished at the piano from a young age. His most well-known collaborations were with Art Blakey and Miles Davis.

Although this list isn’t comprehensive, each of these artists’ creativity and legacy gave them a place in the history of jazz – a music which reflects African American history, experimentation, culture, and change.

If you’re interested in honing your jazz skills, spend some time listening to songs from these jazz pianists and even try to transcribe a short riff from one of them. You can also obtain professional instruction from a piano teacher at TakeLessons, who can give you feedback and guidance on how to improve your skills, one lesson at a time!

Post Author: Nadia B.
Nadia B. teaches local and online piano lessons in New York, NY. She has been teaching since 2003, and has a degree in Music Performance from New York University. Learn more about Nadia here!

8 Showstopping Songs to Sing for a Talent Show