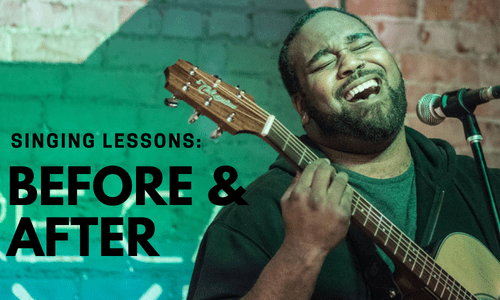 The transformation in vocal students before and after singing lessons is truly inspiring. As a singing teacher, it really is amazing to watch students learn to do everything from match pitches to mix belt like a Broadway star.

Have you ever wondered what you would sound like if you took voice lessons? Although every singer’s results will be different, YouTube has a variety of before and after singing lessons videos, so you can hear the typical results of vocal study.

Singing Lessons: Before and After

In Troy’s older videos, one thing stands out immediately: his significant jaw tension. It almost looks like he is holding something in his mouth, and he is afraid that if he opens his mouth too wide, something will fall out.

Try to notice his masseter muscles clenching as he sings. In addition to the jaw tension, his muffled, uncomfortable tone suggests tongue and throat tension. Now check out this second video.

Even by watching Troy’s “after singing lessons” videos without sound, it’s obvious that he’s starting to relax his jaw and open his mouth more while singing. His face looks much more comfortable, and forming words looks much easier.

His tone is also clearer and has lost that muffled quality, suggesting that the tongue and throat tension he struggled with has largely dissolved. Congratulations, Troy! This is truly an inspiring singing transformation.

Polina Lesik is a professional singer from Russia. Although her video does include some footage of live performances, most of the older clips are audio only. Even so, the difference in technique is abundantly apparent.

In the older singing clips, Polina’s singing shows significant pitch problems. While she was always in the ballpark of the correct pitches, she was off just enough to give the singing an amateur quality. She also exhibited no vibrato in the early years.

However, she was studying classical voice during that time, and by 2007 (as exhibited at 3:11 in the video), her head voice technique had markedly improved. She was also showing better pitch accuracy and vibrato.

It wasn’t until 2010, when Polina again started studying with a voice teacher (this time for jazz voice), that her rock and pop sound improved. The forced sound disappeared, and she was left with greater pitch accuracy, steady vibrato, and a clearer timbre in both her chest and head registers.

Her later videos also exhibit an ability to mix her chest and head voice (called modal voice) in order to hit belted high notes without any strain. Great job, Polina!

Rached Hayek is a singer and songwriter from Sydney, Australia. This video’s “before” example is a cell phone recording that doesn’t include video. But just like with Polina, the noticeable difference is enormous.

The song in both the “before” and “after” recordings is “Walking Away” by Craig David, sung a cappella. In the “before” recording, Rached’s tone is pleasant, and it’s clear that he has talent. However, he was not able to successfully navigate the runs and register changes in the song.

When he tried to change notes rapidly, he went out of tune, and because he was singing a cappella, this threw the whole song off balance. In addition, his runs slid together, at times resembling a vocal slide rather than individual notes.

The “after” recording tells a different story. The runs are now clean and distinct, each note precise. As a result, even without a back track, Rached is able to stay in tune. Wonderful work, Rached!

If you’re serious about making vocal progress, find a singing teacher near you or start taking online singing classes today. With the proper guidance, you’ll learn how to sing comfortably in whatever style you choose. And soon, you’ll be able to make your very own “Singing Lessons – Before and After” video!

24 Smart Study Tips to Get an “A” in Spanish Class