When you’re new to playing piano, you might feel overwhelmed by all the keys! But here’s a secret: those 88 keys can be reduced to just seven piano notes, and a few essential patterns. Easy, right? Here, teacher Nadia B. shares a super-easy visual introduction…

Did you know the keyboard of a piano is full of tricks and secrets? Music is full of different patterns, and as you become more familiar with them, you’ll learn how to read piano music faster, while playing confidently and correctly. If you want to learn how to read piano notes quickly (and improve your sight-reading skills), knowledge of these basics is essential. Following along with a YouTube piano tutorial might be fun, but it’s not going to help you progress as a pianist.

So where do you start? Some of the main building blocks of music that come in handy with piano are half steps and whole steps, the chromatic scale, enharmonics, and flats (noted as ‘b‘) and sharps (notated as ‘#’). Here’s what you need to know…

You will find half steps in both major and minor scales. For example, in the C major scale, E to F and B to C are both half steps.

Familiarizing yourself with half steps and being able to rapidly recognize them will allow you to decode music more easily, as you’ll be able to see the same patterns of half steps in written music.

An example of a whole step in a major scale is from F to G in the F major scale. Similarly to half steps, recognizing whole steps and understanding their function allows you to read piano music faster and also learn how to create major and minor scales using a set pattern of whole and half steps.

Now that we’ve covered the building blocks of any piano scale, we can cover a scale that relates directly to half steps: the chromatic scale. Composed entirely of consecutive half steps (that is, not skipping any keys from the beginning to the end of the scale), the chromatic scale is most often practiced by starting on any note, reaching the same note one octave higher, and then descending back to the original note. For example, we can start from F in one octave, play up to F in the next octave, and return back to the original F.

A sequence of notes may start on one note and end on a different note — it’s the pattern of consecutive half steps that distinguishes it as chromatic.

Another fundamental concept of the keyboard is that one key can have multiple names. This can cause a great deal of confusion, but once you understand how it works, you’ll find it pretty simple. ‘Enharmonic’ is the name for this concept. For example, F sharp, which we find by identifying F on the keyboard and then moving up a half step, can also be called G flat, which we find by identifying G on the keyboard and then moving down a half step. We arrive at the same note, F sharp/G flat (F#/Gb).

It’s good to recognize the dual names of enharmonics because you will sometimes see both names within one piece as the key modulates. Enharmonics allow us to travel to different keys seamlessly and logically.

Sharps and Flats on the Piano

The key to applying sharps and flats correctly is knowing that you are always moving in half steps. A flat indicates a half step down, while a sharp indicates a half step up. Knowing this, you can also apply double flats and double sharps properly. If you see a double flat, that means you should move downward two half steps from the original note, while a double sharp indicates that you should move upward two half steps from the original note. An example of this would be D double flat: by moving from D to D flat and then again from D flat to C, we arrive at D double flat (which is the same key as C).

Using half steps as a means of applying flats and sharps is an infallible method, and you’ll be moving around the keyboard easily once you learn this method.

To recap, here are the four building blocks on one handy infographic: 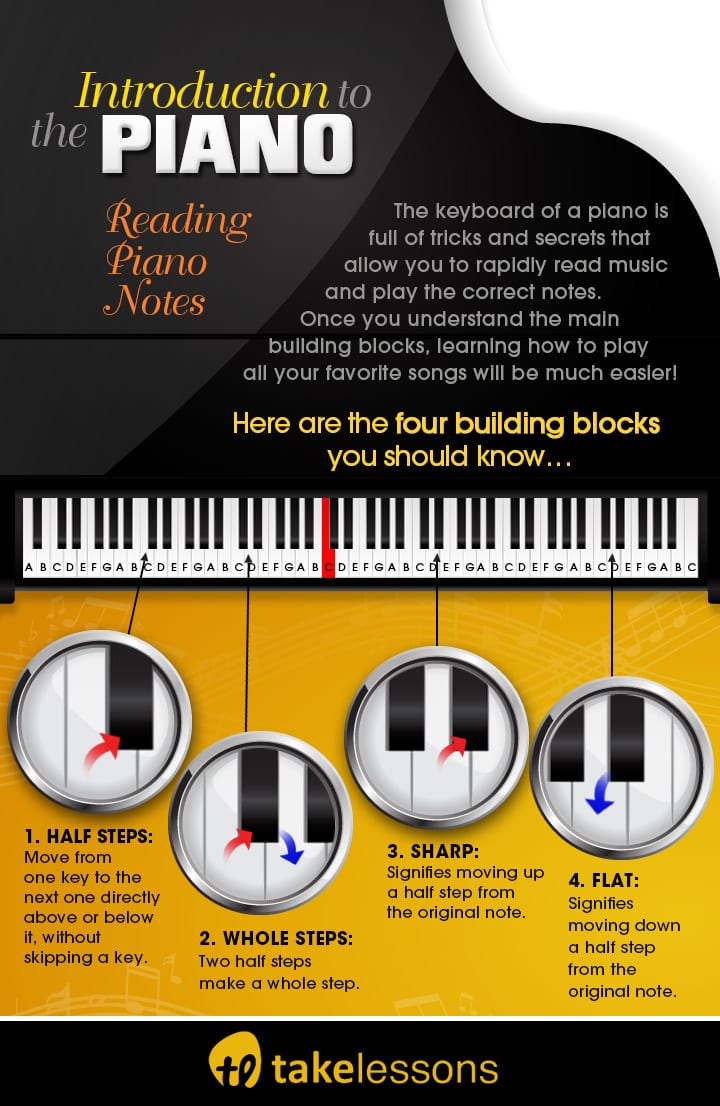 How to Read Music Faster & Improve Your Sight Reading

Understanding these basic structures at the piano will help you to read piano music faster, especially when you’re sight reading. Viewing a phrase, you will no longer see each note as a separate entity — rather, you’ll see the relationships between them (whole steps, half steps and larger intervals), as well as patterns that make up scales like the chromatic scale or the major scale. Knowing how sharps, flats, and enharmonics work means that you won’t be stymied by an unusual flat, like C flat. Instead, you’ll easily translate it to B natural in your mind. With these tips, you should be sight reading more fluently and accurately than ever before.

Now that you understand the patterns of the keyboard, don’t hesitate to try to find examples of these in your piano music! You will discover a unique language that is logical, organized, and creative all at once, and decoding it will result in many hours of delight making music at the piano.

Next up? Check out my other visual tour, and learn how to read piano sheet music!

Need some extra help? A private piano teacher can lead the way! Search for a teacher near you here.

Post Author: Nadia B.
Nadia B. teaches flute and piano in New York, NY, as well as through online lessons. She acted as principal flutist of the orchestra and wind ensemble at California State University, Sacramento, and then went on to receive her degree in Music Performance from New York University. Learn more about Nadia here!

One thought on “How to Read Piano Music Faster: Intro to the Keys”