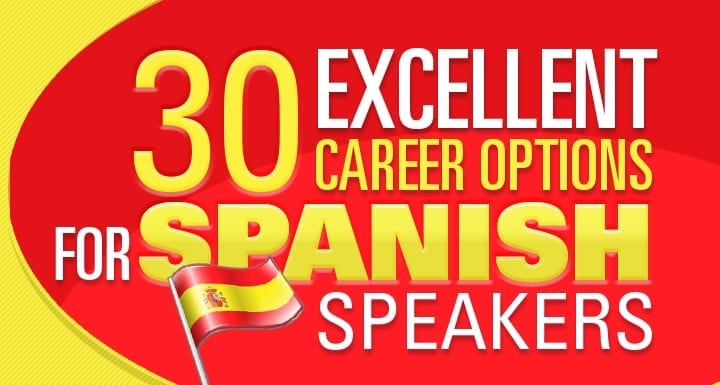 You know the benefits of being bilingual, but how should you put your Spanish skills to the best use? Here, Jason N. shares several jobs for Spanish speakers to consider, from careers in health care to government positions to tourism coordinators…

Let’s start off with good news! If you are bilingual in Spanish and English, you probably aren’t struggling to find employment! Being bilingual clearly makes you a more desirable candidate in the workforce.

As I have mentioned in previous blog posts, the number of Spanish-speaking people in this country continues to increase by the day — and businesses are learning that they can target a wider audience and serve more people if they expand their services and products to the growing Spanish-speaking public. The health sector in particular is realizing that an entirely monolingual English-speaking staff does not adequately serve the health needs of many Spanish-speaking populations.

Your command of Spanish makes you more hirable and qualified for higher-paying jobs in many industries. After showing you a bird’s-eye view of jobs for Spanish speakers, I will go into more detail about specific sectors that are currently on the prowl for bilingual hires.

Please include attribution to http://takelessons.com with this graphic.

Jobs in the Health Care Sector

As the country’s Spanish-speaking population increases, the need for bilingual professionals rises. Conversational fluency is a key for this field, particularly because medical conditions and treatment often require specific and scientific language. The subtleties of meaning can be ‘lost in translation’ if the speaker cannot convey and understand the message.

Knowing the language also implies knowing certain cultural norms. Being of Hispanic origin or living in a Hispanic country for an extended period of time can offer insight into the family situations and everyday concerns of patients you will be dealing with regularly. As patients grow comfortable with the people they count on for their care, their quality of care increases.

Jobs in the Law and Law Enforcement Sector

Many Spanish-speaking immigrants need to work with law firms for immigration and other issues. If you speak Spanish, you instantly double the number of people you can represent, help, and serve. Law enforcement also addresses how people in public relate to each other. For instance, when residents cannot converse with local police, fear and resentment can develop between certain parties. This makes areas less safe for residents and the job of patrolling it more difficult for police. Predominantly Spanish-speaking neighborhoods need bilingual officers to attend to both the English- and Spanish-speaking portions of the population regularly.

Jobs in Interpretation or Translation

Most industries need skilled translators who can communicate in Spanish to target a wider population and “spread the word.” Many translators have governmental jobs (Spanish is one of six of the official languages of the United Nations), or work freelance, with ad agencies, or with schools. Many courthouses employ translators and bilingual court reporters. In many cases, the job you already have may find you even more valuable if you become fluent in a second language — some companies are even willing to pay for schooling to learn Spanish!

Jobs in the Journalism Sector

With a growing Spanish-speaking public comes a need to deliver news and information in the primary language of a given community. Because they can speak to both the Spanish and the English public, bilingual reporters and writers have an advantage over the competition and subsequently increase their profitability, desirability, and marketability. With specialized Spanish-speaking networks and publications on top of the many English media outlets across the country, the need for bilingual journalists is greater than ever before.

Jobs in the Hospitality Sector

Hotels, restaurants, spas, bars, and any other places tourists frequent on vacation or for business require professionals who can communicate both with locals and international travelers. Specific areas where there are a higher number of Spanish-speaking residents — such as Los Angeles, San Francisco, San Diego, New York, and Miami — require Spanish skills more than others. This is an additional plus to pursuing a career in the hospitality industry, since these are also some of the most attractive and warmest parts of the country.

As you can see, there are many jobs for Spanish speakers to consider! The benefits of learning Spanish are vast — not only for your career path, but when it comes to your personal life, too. Learning Spanish can help you make new friends, stay mentally sharp as you age, and even save you money as you travel.

Already started learning? You’re well on your way to all these benefits. Need some extra help? Search for a Spanish tutor near you here!

Jason N. tutors English and Spanish in Fairfax, CA. He majored in Spanish at UC Davis, lived in Mexico for 3 years where he completed a Master’s degree in Counseling, and studied Spanish Literature and Psychology at the University of Costa Rica. Learn more about Jason here!