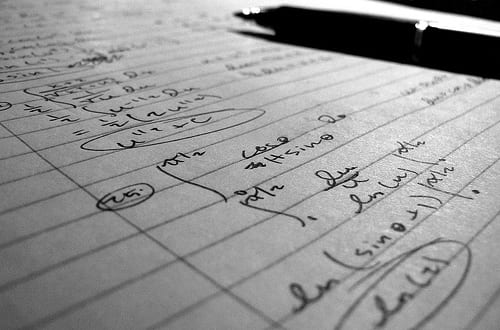 Music is often seen as a creative art, but believe it or not, math plays a heavy role in learning how to read the language. Read on as violin, vocal and piano teacher Blythe Q. explores just a few ways music can help students in other subjects…

Most of us have heard of the “Mozart effect,” the set of research indicating that early exposure to classical music can improve the brain’s ability to perform certain tasks, particularly related to spatial-temporal reasoning. As a lifelong classical musician, I have noticed these effects first-hand. The correlation between music and math, language, and other subjects is clear to those who have studied music throughout their lives.

My parents both love classical music, so I was exposed to it from a very early age. I began taking violin lessons at age three. Successful violin study requires careful listening to pitch and tone quality, so I developed a very sensitive ear, which helped in my foreign language classes later on.

I learned to read music before I learned to read books in school and, having already mastered the written musical language, I progressed quickly with reading far beyond my grade level. By the time I learned fractions in school, I already had a strong grasp of fractions in music – whole notes, quarter notes, sixteenth notes, etc. My music teachers made a point of telling me a bit about the composers whose music I was playing and the time period in which they lived and worked. As a result, I had a general idea of the Renaissance, Baroque, Classical, and Romantic periods in music and was able to apply that knowledge to the art, architecture, and political movements that I learned about in my social studies classes.

As I got older, I found that music also helped me concentrate on my school work. I had an easier time studying math if I was listening to Bach and I enjoyed listening to music by French composers while working on my French homework.

Music can be an incredibly valuable learning tool. I have many friends who admit to singing the alphabet song to themselves while organizing their books! My German teacher in college had us sing the prepositions that take the dative case to the tune of Johann Strauss’s “Blue Danube” waltz. And how many students out there memorized the preamble to the U.S. Constitution thanks to Schoolhouse Rock?

Listening to music engages the auditory portion of the brain, which is extremely valuable to auditory learners or anyone with an auditory memory. Learning to play a musical instrument combines auditory, visual and tactile/kinesthetic skills, helping to ensure that anything learned in a music lesson or class will stay with the student.

I have had a number of students notice improvement in their academic classes after they began studying with me. One student in particular stands out in my memory. She had just begun kindergarten when she started taking piano lessons. In her lessons, she had a bit of a difficult time learning to read music, but eventually caught on and did very well. It wasn’t until much later that her mother told me the impact that the lessons had on her. My student was really struggling with reading in school, but she started having a much easier time once we began learning the notes on the staff in her lessons.

Not everyone begins taking lessons with the dream of becoming a professional musician, but those who do study music often feel the effects of their musical education in other areas of their lives. I truly believe that almost anyone can benefit from the study of music!

Blythe Q. teachers piano, singing, violin, music performance, and music theory lessons to students of all ages in Lawrence Township, NJ. Blythe’s specialties include Broadway-style singing and classical/opera. She joined the TakeLessons team in September 2012. Learn more about Blythe, or visit TakeLessons to search for a music teacher near you!