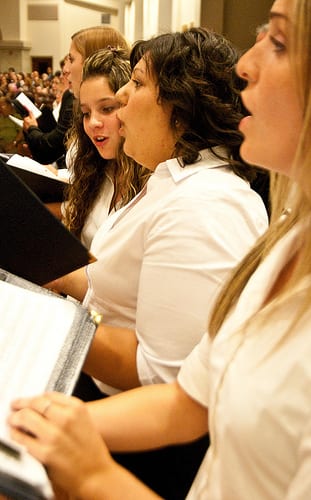 If you’ve been taking singing lessons for a while, you’ve probably practiced several silly warm-up exercises. You know, the ones where you’re making funny faces and sounds, saying nonsensical phrases, and so on. All of these exercises have one common goal: to prepare the voice and help you learn to keep your mouth and throat open. Read on as Seal Beach instructor Carl B. explains why vowels are important for this very reason…

A few years ago I coined a phrase that clarifies the importance of focusing on the vowels while singing.  It is: “A song is a series of songs called vowels.”

Each vowel should be perfectly formed, sung as beautifully as if it were a song unto itself, and sustained as long as the song allows, regardless of genre.

The international singing vowels are ah, eh, ee, oh and oo.  These are the vowels sung in Italian, and also in Hawaiian.  I have read arguments that there are actually 7 vowels in Italian, and I leave that discussion to others for now.  Other languages also have additional vowels, for example in English we also have uh, ih and aa.

Many singers do not realize how well their vowels are or are not being formed.  Even very good singers can lose focus on their vowels and think they are forming perfect vowels when they are not.  The reason most people say “That’s not me!” the first time you hear yourself on an answering machine or other recording is that we don’t hear ourselves primarily through our ears, as others hear us.  Instead, we hear ourselves primarily through the vibration of our jaw bone.  The only way to truly hear yourself as others hear you is to listen to yourself in a recording.

When you begin taking perfect vowel formation seriously, you’ll be surprised at the improved sound of your recordings, and also of your audience’s more emotional response to you and your singing.

Carl B. teaches singing and speaking voice lessons to students of all ages in Seal Beach, CA. Carl teaches singing in English, Italian, Spanish, & German, in all styles including pop, jazz, classical, & country & western. He joined the TakeLessons team in August 2012. Visit TakeLessons to search for a vocal teacher near you!