Once you’ve learned the basics of Spanish, it’s time to make your sentences flow! Here, we’ll explain the importance of transition words.

Intermediate Spanish students frequently ask how they can take their Spanish skills to the next level or sound just a bit more natural. One simple way to do this is to add transitions to your sentences.

This not only provides a good flow and allows the listener or reader to simply follow along, but it also adds interest.

Why Transition Words Matter in Spanish

Take, for example, this short summary of what I did today:

I did laundry and cleaned the dishes. I tutored a student. I watched TV with my dog. I did some work.

Sounds pretty boring, doesn’t it? One reason this sounds like no fun at all is because these sentences lack transitions. As native English speakers, we are naturally familiar with adding transitions to our sentences, but many beginner to intermediate-level students tend to forget to add these same transitions when they are writing in or speaking Spanish.

If I had added just a few transitions, the reader would be much more interested and the story would have a better flow:

After waking up, I did laundry and cleaned the dishes. Then I tutored a few students. After helping all of my students, I came home and watched TV with my dog. Finally, I sat at my desk and did some work.

Sure, it may still be a little boring, but there’s better flow and progression between the sentences and hopefully you found it at least a little more interesting. This is a prime example of why it’s important to use transitions in Spanish.

There are several different types of transitions, including…

Introduction to Spanish for Beginners

How to Describe Yourself & Others

Practice Speaking Spanish for All Levels

For example, “Mi grapadora está al lado de mi calculadora” (“My stapler is next to my calculator”). In this case, the transition must be within the sentence because it’s relating the stapler to the calculator. It’s also worth noting that the verb used here is estar and not ser because the location of the stapler is temporary. (Editor’s note: learn more about estar vs. ser here!)

For example, I could say, “No tengo leche. Por lo tanto tengo que ir al supermercado” (“I am out of milk. Therefore, I must go to the store”).

Or I could say “No tengo leche, por lo tanto tengo que ir al supermercado” (“I am out of milk, and therefore must go to the store”).

Here you can see that I can place “therefore” either at the beginning of the sentence to explain the result of not having any milk, or I can add a comma or semicolon and place the transition word after the comma or semicolon. 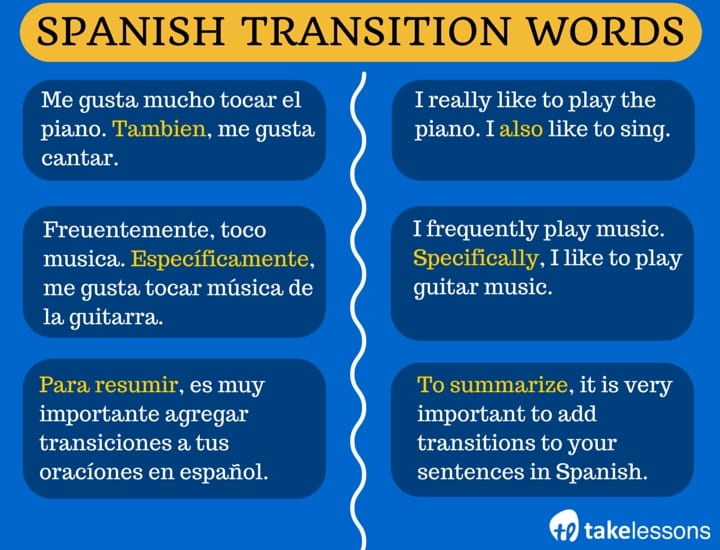 We hope this article has helped you realize the importance of adding transitions and transitional phrases to your current Spanish vocabulary! Please don’t be scared to start sprinkling them in whenever you can.

You won’t get lost in a Spanish speaking country after taking this group class! An expert instructor will teach you how to ask for directions, and give directions, for different places in your community. You’ll also learn how to read maps in Spanish! An added bonus - learning how to use the verb “estar” appropriately will allow you to discuss feelings with others.
Today at 5:00pm Learn More

Music is a great way to learn any language, and this class will help you learn new vocabulary through popular Spanish songs. You’ll get to discover new musicians that will help you better understand the Spanish culture. Join in the fun as we learn songs to improve our Spanish skills, alongside other students at your level.
Today at 7:00pm Learn More

Practice Speaking Spanish for All Levels

Are you ready to start speaking Spanish in a fun, interactive group setting? The easiest way to learn Spanish starts with diving right into conversational Spanish. You'll be surprised how quickly your phrasing and accent improves when you speak! This class is perfect for anyone looking to practice speaking and listening.
Monday at 11:00am Learn More

This online Spanish class will give you a firm foundation of skills so you can start your journey to fluency on the right foot. After this class, you’ll be able to introduce yourself and others in Spanish. Proper pronunciation and spelling will also be covered so you can develop both speaking and writing skills. Lastly, identifying words that sound similar in Spanish and English, also called “cognates,” will help you master even more vocabulary!
Tuesday at 5:00pm Learn More

How to Describe Yourself & Others

This online Spanish class will introduce you to the common verb “ser” so you can learn how to describe others. An expert instructor will also cover adjectives to describe physical characteristics. This new vocabulary will make it easier for you to talk about your family and friends, as well as understand others when they are doing so.
Tuesday at 6:00pm Learn More

Take your skills to the next level in this online Spanish class! You’ll learn how to use present tense verbs to form complete thoughts and sentences. You will also have the ability to describe actions and things you do on a regular basis. Lastly, the class will begin writing simple sentences with guidance from an expert Spanish instructor.
Wednesday at 7:00pm Learn More

Introduction to Spanish for Beginners

In this fun beginner-level class, you'll have the chance to work with a professional Spanish instructor to learn some basic conversation techniques that will help you feel more confident about your Spanish speaking skills. Plus, there will be time for brainstorming about your goals with Spanish and time to practice your skills to get instant feedback from a live instructor. This class is great for beginners who are just starting out with Spanish lessons and want to warm up before their first private lesson--this is the best way to get the jitters out and jumpstart your learning!
Apr 16 at 7:00pm Learn More

Are you ready to learn how to describe the events taking place all around you? After this class, you’ll be able to talk about everyday activities. An expert instructor will introduce you to several common “-er” and “‘-ir” verbs. You’ll also get to practice using “tu” and “usted” for different situations, both formal and informal.
Apr 21 at 5:00pm Learn More
© 2020 TakeLessons Terms of Use | Privacy