How much do you know about traditional Spanish dishes? Learn about the food culture in Spain, and the recipes to salivate over, in this post…

The cultural aspects of any language you learn are just as important as its grammar and pronunciation. Especially, when we’re talking about Spain, with its vibrant traditions and unique style of life!

If you’re used to having only three meals a day and eating your food in a hurry, Spaniards will teach you how to appreciate every dish. Locals usually have five mealtimes a day rather than just three!

After working for a few hours, many people take a break for el almuerzo (mid-morning snack). The typical foods are all kinds of tapas and bocadillos (sandwiches). It’s a very important meal, and one that many people use as networking time with coworkers. So, if you hear coworkers say “Vamos a tapear!”, grab your jacket and get going. You can also hear the same phrase later in the evening when Spaniards go to their favorite tapas bars.

La comida (lunch time) in Spain can last for up to three hours. Some office workers prefer to have their lunch at home and most of the time is spent on the commute. Restaurants and cafes will often have a menu del dia that consists of three or four courses. You may be offered sopa de ajo (garlic soup), paella de marisco (seafood paella), and flan (custard with caramel sauce) for dessert.

If you get hungry at the end of the working day (6pm), you might have an afternoon snack called la merienda, to fill the meal gap between lunch and dinner. It’s often something sweet, like a pastry, but could also be something savory, like a sandwich.

Churros are a very popular option. If you’ve never tasted them before, churros are fried pastries served hot, similar to donuts. Muy delicioso!

After work, most people spend the evening relaxing with friends and family. You might stay at home and cook something or invite your friends to go out for tapas. Tapas — smal portions of food that are shared — are very popular, and there are dozens of options to suit your cravings.

In general, there are no typical dishes for la cena (dinner), but you can expect smaller portions at this time. It’s also served much later than Americans are used to eating dinner — think 10pm!

Keep Learning: Check out more Spanish phrases for dining, or learn more about the Spanish culture in our other blog posts!

Beyond these, there are many popular dishes that come directly from Spain. While the origin of churros, for example, is unclear, the 20 dishes listed in the infographic below have strong historical ties to Spain specifically. Follow the numbered guide to see which area the dish is linked to. 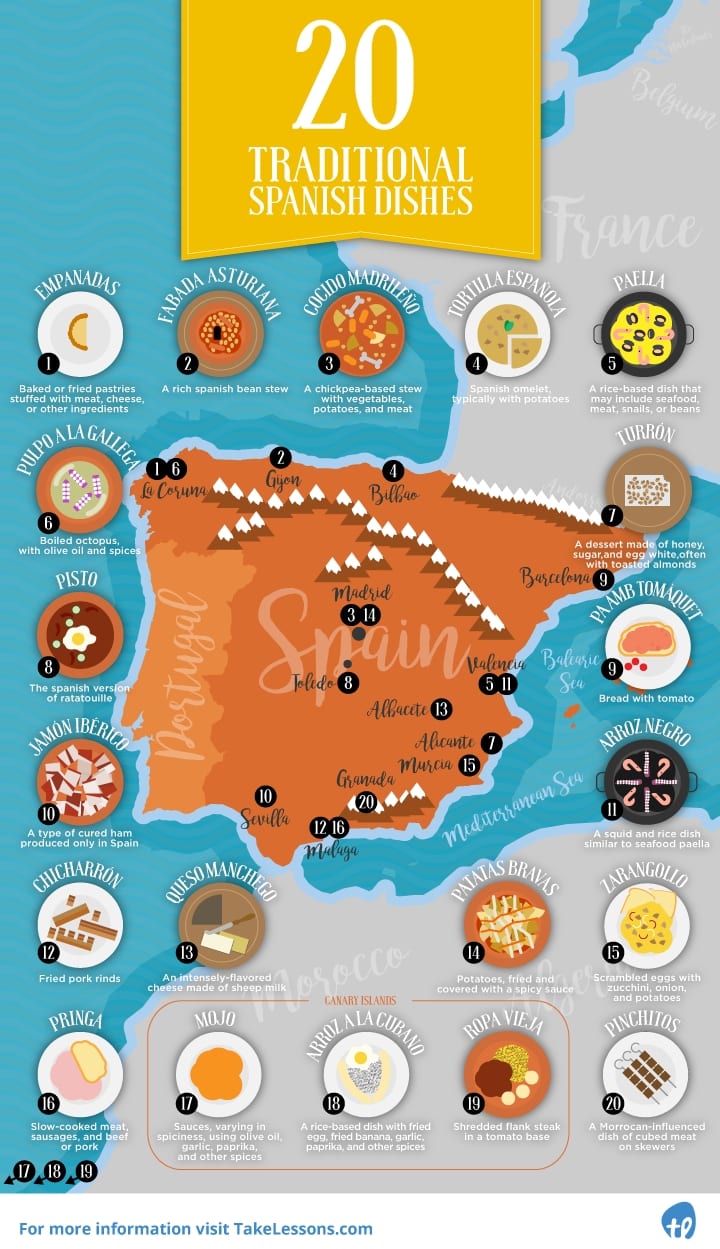 Which of these traditional Spanish dishes sounds good to you? Here are some links to recipes around the web: 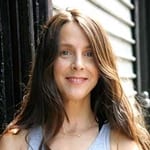 Guest Contributor: Martha Simons
Martha is a writer and editor at Translateshark, a translation service. She enjoys writing articles on learning languages and translation, reading, and traveling, as a way to free her mind and relax.