What are the best songs to sing at an open mic? Here, online teacher Liz T. shares her best tips for selecting a song and impressing the crowd…

Have you signed up for an open mic night? Whether you’re interested in strumming your guitar while you sing, telling a few jokes to complement your crooning, or just belting out your favorite tunes, you’re in luck.

Singing at an open mic night is a great way to draw attention to yourself as a singer, to get your name out there, and of course, to practice your singing!

Signing up for the open mic night is only half the battle. Once you’re in, you’ve got to figure out some good songs to sing at open mic night.

In this post, we’ll tell you about some of the best songs to sing at an open mic night – you’re guaranteed to impress the crowd!

What Do You Sing at an Open Mic? 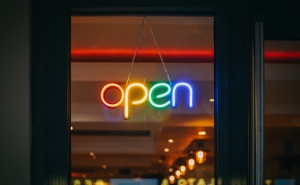 You can choose any song that you truly love (and are good at singing) when it comes time to perform, but here are some great songs to sing at open mic night:

Of course, this list is far from exhaustive! There are plenty of other good songs to sing at open mic. It’s all about finding the song that fits your voice and personality the best.

One of the best ways to unleash your real ability as a singer is to start taking singing lessons. Just check out the video below for more information on how to figure out your vocal range and become a better singer! 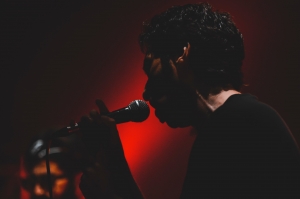 If you’re a singer looking to get more experience performing your songs in front of a live audience, attending a live open mic is a great way to start! Open mics are becoming very popular these days, and you don’t have to live in a major city to sing at one. Many local restaurants, coffee shops, and colleges host open mic nights to build a music community and are very supportive of live music at their establishment.

Get to know the live music venues in your city and ask about their open mic nights, and how you can be a part! Keep in mind that some places will be free to play, but you will not be paid to play – or you actually may have to pay $10 or $15 to play one song. If you need piano or guitar accompaniment there may be a small fee for that as well.

Once you’ve found a good spot, it’s time to take the stage! Here are some tips for selecting the best songs to sing at open mic:

My advice is to pick something that you are very comfortable with singing at first. You might be nervous performing at a new space, and the crowds may vary from 2-3 people to 100 people. The best songs to sing are ones you know like the back of your hand. If nerves do start to kick in, you’re less likely to forget the melody or the lyrics!

Choose a song that another artist has made popular, a song that the audience will be familiar with already. Some of my go-to favorites are “Natural Woman” by Carole King, “If I Ain’t Got You” by Alicia Keys, “I’ll Be There” by The Jackson 5, and “Ain’t No Mountain High Enough” by Marvin Gaye. The crowd will really get in the mood, encourage you, and perhaps even sing or dance along.

There is no particular right or wrong style of music to sing at an open mic. Even when doing a cover song, try to be unique and individual as yourself. Just like on YouTube when you hear covers, you don’t want to hear them sing the song exactly like Alicia Keys. Give it your own interpretation, or if you are accompanying yourself, change the style or tempo of the song. You could do a country song maybe with an island/reggae feel for summer, or try doing a rock ballad a little more pop, with swing.

If you are a songwriter, open mics are a great place to start showcasing your original work, and to test if it works in a live setting. You can feel free to experiment at open mics, just make sure you are comfortable with the song before you start experimenting.

Open mics should be fun, low stress, and truly for your and the audience’s enjoyment. It should be laid-back, but you still want to look professional on stage. Also, open mics singers usually perform with one instrument rather than a full band, either you and a guitar player or piano player, or you can accompany yourself. You can also use a background track, but then that tends to sound a little too much like karaoke.

What Are Good Songs to Sing at an Open Mic? 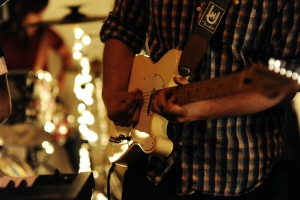 Curious about which songs to sing at open mic? Here are some of the best options, no matter what kind of singer you are!

Are you a guy looking for some of the best songs to sing at open mic? Here are our top picks:

Want to play your guitar while you sing at an open mic? No problem! Here are some great songs to sing.

If you’re new to open mic nights, it’s understandable that you might have a little trepidation over what song to sing. Here are some laid-back, easy songs that just about any singer can tackle.

While you can sing just about anything your heart desires at open mic, there’s no better way to get a crowd going than to sing something peppy and upbeat. Here are some of the best songs to sing at open mic to really get the crowd going!

How Many Songs Do You Need for an Open Mic? 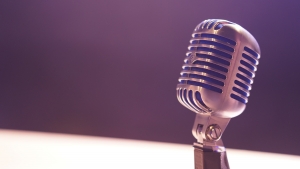 Plan on preparing three to four songs for open mic. You’ll usually get about 20 minutes to perform, so have a list of up to six songs that you’re ready to sing if there’s enough time. It’s better to have too many songs than not enough!

So have fun, and enjoy performing for a live audience. Once you get comfortable singing at open mics, start keeping a book of different songs you could perform in the future. Good luck! You never know who might be in the audience; this could be your big break!

Liz T. teaches online singing, acting, and music lessons. She is a graduate of the Berklee College of Music with a B.M in Vocal performance and currently performs/teaches all styles of music, including Musical Theater, Classical, Jazz, Rock, Pop, R&B, and Country. Learn more about Liz here!