It’s tough learning a new language, but have no fear — an easy lesson is here! Here, Spanish tutor Jason N. shows you how to use prepositions to connect words together and create simple sentences…

A Look at Prepositions in Spanish

Let’s go over the three most important prepositions:

Prepositions in Spanish are mostly used the same way in Spanish as they are in English. Once you get comfortable with memorizing the vocabulary, it should feel like common sense, except for a few (almost all rules have exceptions).

The first preposition is a, which allows you to discuss topics such as movement, actions, and time. Below are some examples of the uses of a.

Movement or motion (to)

Connect one verb to an infinitive (not translated directly)

Show how to do something (on, by, with)

Introduce a person – the “personal a” in Spanish, which has no direct English translation

The second proposition is de, which lets you say where something is from, how something compares, and descriptions of things. Below are some examples of the uses of de.

Address cause (from, with)

State the origin (from, of)

Describe a noun with another noun or infinitive (of)

The third proposition is en, which tells you where something is, how something is done, and when something occurs. Below are some examples of the uses of en.

Specify location (in, on, at)

Show how to do something (on, by, with)

There’s more where that came from! Here’s a handy Spanish prepositions list: 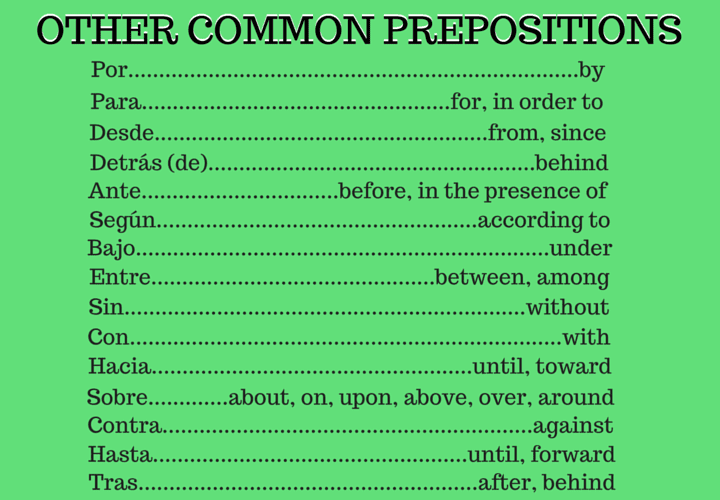 If you’re comfortable with these already, try tackling Spanish transition words. There are a lot of prepositions at your disposal, but don’t let that scare you! A consistent schedule for practicing Spanish will help you improve at a steady rate. Sooner than later, these prepositions will be second nature in your vocabulary. Dedicate yourself to learning, but most importantly, have fun!

Post Author: Jason N.
Jason N. tutors in English and Spanish in Athens, GA. He majored in Spanish at UC Davis, lived in Mexico for 3 years where he completed a Master’s degree in Counseling, and studied Spanish Literature and Psychology at the University of Costa Rica. He is currently attending the University of Georgia. Learn more about Jason here!