What are piano cadences, and how are they used? Learn the ins and outs in this guest post by Manassas, VA teacher Carol K…

When I first decided to tackle the word “cadence,” I thought to myself – “What exactly do I think of when I hear that word?” For me, the word implies an ending, or rhythmic inflection of sound, like the modulation of the voice in reading or speaking. This article will examine, in greater detail, what a cadence means to musicians, the types of cadences, and how they are used in piano sheet music.

What is a Phrase?

A musical phrase is a musical thought. It is usually four measures in length and is often incomplete. To the listener, this creates an unsatisfactory end. In order to finish the musical thought, the next four measures that follow will lead the listener to a cadence. Once a resolution occurs, we can articulate this feeling of closure by using chords with a tonal center (a group of notes that begin and end on a specified note).

What are Chord Progression and Cadences?

When the concept of tonal harmony, i.e. a piece of music that has a tonal center, arrived in the 17th century, the notion of a cadence became structurally important. This was due in large part to the introduction of the chord, a group of three notes played together. A chord progression is the movement from one chord to another, and a cadence is the goal or arrival point that is created by a two-chord progression.

This stopping point could be in the middle of the piece or at the conclusion of a song. It creates a sense of resolution or closure. There are several types of cadences: authentic, deceptive, half, and plagal; in this article I’ll focus on the first three.

There are two subcategories of authentic cadences:

Examples of a perfect and imperfect cadence are illustrated by the two samples below:

A half cadence is exactly what it implies. When comparing the half cadence to the authentic, one of the major differences is that the half cadence does not resolve back to the I chord. It is incomplete and stops at the V chord. This results in a musical phrase that sounds unfinished. It is as if the listener is asked to be prepared for the ending, but instead of arriving at a chord that leads to the tonic or home, the final chord ends on a V (dominant chord).

Here is an example of a half cadence:

A deceptive cadence pretends to be resolving to a V-I, but it takes a detour toward a different harmonic chord, most often the vi chord (subdominant, which is based on the sixth degree of the scale). In this sense the listener is thwarted from hearing what he or she expects, i.e. a resolution back to the tonic. Instead, listeners are left with a feeling of suspension.

An example of a deceptive cadence is illustrated in the following sample:

How Are Cadences Used in Piano Music?

Below are two examples of how authentic and deceptive cadences are used in piano pieces. The first example is an excerpt from Schumann’s “Soldiers’ March”, which uses an authentic cadence, and the second example is an excerpt from Beethoven’s Piano Sonata, Op. 7, which uses a deceptive cadence. In the first example, the first four measures lead the listener to a momentary pause, while the last four measures complete the thought. 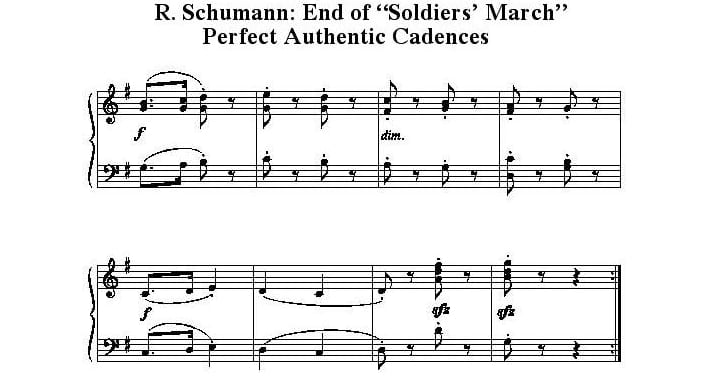 In this second example, the listener is left hanging.

How are Cadences Relevant to Piano Students?

Cadences are helpful for music students in learning how to harmonize music and how to participate in a harmonic analysis of a piece.

Music theory can often seem complicated. As a teacher and someone who has always found a way to be involved with playing, teaching, and singing music, an insight into what is behind the art of music has broadened my appreciation and nurtured my love of music. 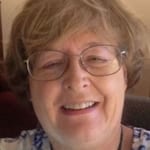