After hearing a new piece of music, listeners often ask, “How’d you come up with that?”

However, this question often implies, “Why did you write that?”

The “why” is not answered easily. Creativity comes from a mysterious place.  Neuroscientists have shown that creative thinkers tend to be “right-brained”  processors (and synthesizers) of information. However, the impetus to compose includes a myriad of both internal and external factors, and often, these factors are elusive and hard to define. Playwright Arthur Miller mused, “The very impulse to  write springs from an inner chaos crying for order – for meaning.” This may be true  for composers and songwriters too.

But… How Do You Write a Piano Composition? 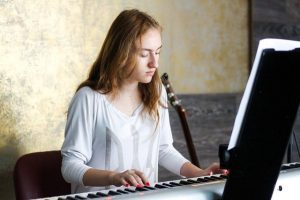 The “How” is a little more tangible, especially once you pop the hood, as it were, on composition and take a look inside. To analyze music, however, you need to possess an understanding of music theory including:

Additionally, to write music for piano, or any pitched instrument(s), you should be familiar with the Circle of Fifths, as detailed in a previous blog.

Beyond that, you will need to look at how chords and scales work together. First,  let’s look at the various types of chords available to a composer. They are:

All of these chords may contain chordal extensions too. Examples of this include  7ths, 9ths, sharp-11’s, and flat-13’s. But if you’re a beginner, keep it simple. Many  great songs and pieces use only basic, triadic chords.

On piano, beginners should focus on stacked third chords (and their inversions).  The technical term for this is called tertian chords. More advanced composers may explore other chordal combinations such as quartal and quintal chords.

If you understand harmony (chords) you can then build melodies. Melodies and  harmony are always related to one another in tonal music. Melodies derive from  notes found within with chords (chord tones). They may also include scale tones, which complement each chord type.

For example, a C major triad includes the notes “C, E, and G.” These are stacked third intervals. When building melodies, pitches in the C major scale (Ionian mode)  fit nicely with this chord. Sometimes there are exceptions though. The fourth scale  degree of the major scale is often considered an “avoid” note when paired with the  major triad of a I chord. (See below for an introduction to Roman numerals).

In this example, the fourth note of the scale “F” clashes with “E” since it is so  close intervallically. Similarly, a C minor triad contains the notes “C, E-flat, and  G.” The C natural minor scale (Aeolian mode) pairs nicely with this triad, except  for the “A-flat” since it clashes with the “G,” located just a half step away.

Start With a Pentatonic Scale

Other (more advanced) scales complement major and minor chords too. However,  delving into that may be too complicated for beginners. Instead, beginners may consider pentatonics, or five-note scales, to stay clear of any “avoid notes.” An example of a major pentatonic that works well over the C major triad includes the  notes: “C, D, E, G, and A.” For a C minor triad, a good pentatonic choice would  be: “C, E-flat, F, G, B-flat.”

Augmented, diminished, half-diminished chords also have scales that best complement them. For beginners, however, it’s recommended to generally stick with major and minor chords. A lot of fantastic music can be created with just these two chord types.

Many songs and compositions use similar chord progressions. It’s often the unique melodies that give a song its true individual character. Let’s look at some common chord progressions that you can use to get started. To do this, you need to  understand how Roman numerals are employed in music.

Let’s use a C major scale as our guide. This scale uses only the white keys on the  piano. Below are the notes of the scale and their Roman numerals:

Roman numerals show us the relationship between chords.

Below are some common chord progressions to get you started. They are purposely short examples, but you can expand upon them or combine them too. As you become more advanced, you should also explore voice leading or smoother ways to move between the chords. If you’ve never composed though, you might stick to root position chords for now. Root position means that the letter name is the bottom pitch in the chord.

Except for example #3, each chord progression here begins and ends on the “home base” chord of C major. Furthermore, the penultimate chord is always a V chord.  This chord is more commonly called a dominant chord. Chords that precede it are  termed predominant chords.

When you add melodies, you may change the octaves of the chords as needed, and  take out the single note, left-hand roots shown in these examples. Eventually, try  writing in various keys, and always use your ear as the ultimate guide. Start with  four or eight-measure progressions and go from there.