There is nothing more important in the lead player’s tool box than guitar scales.

In this lesson, we will start our explanation of scales with the most basic principles and build towards a complex understanding of what scales are and how we use them.

The first scale most guitar players learn is the minor pentatonic scale.

It is one of the most commonly used scales in rock music, with a timeless bluesy sound that is favored in every genre from country to metal.

Below is a chart of the minor pentatonic scale. If you are not familiar with it, take a moment to play up and down the scale and get it under your fingers.

Remember, memorizing scales is all about visualizing and building muscle memory. 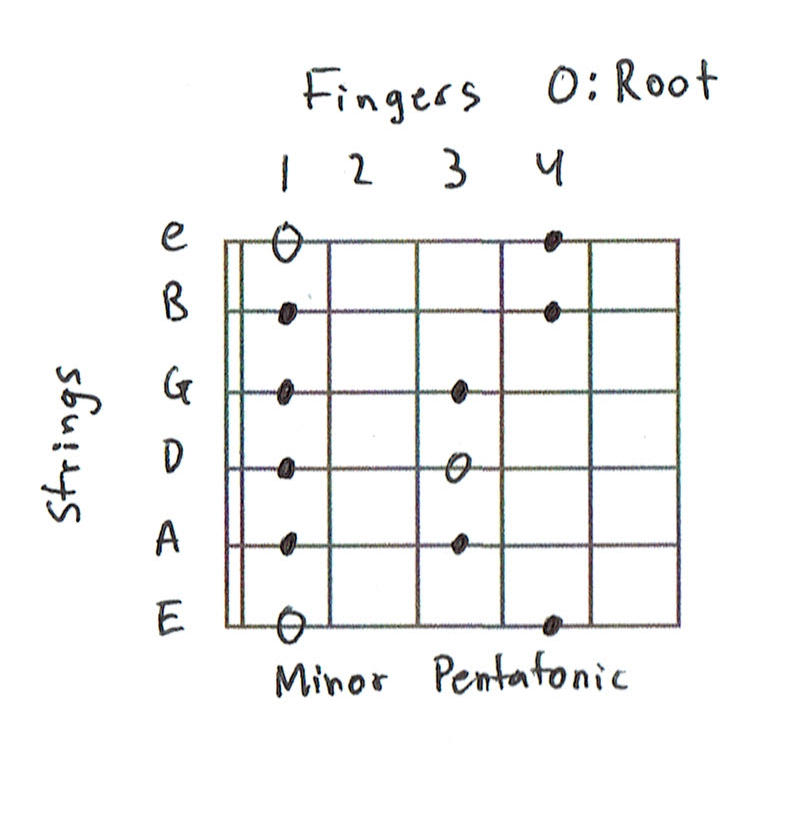 This scale can be played over any minor chord progression, just find out what key the song is in (usually the first chord of a progression, but not always), find that note on the low E string, and use that as the root (or first note) of this scale pattern.

But what do you do if the song you want to play is in a major key? You play the major pentatonic scale shown below. 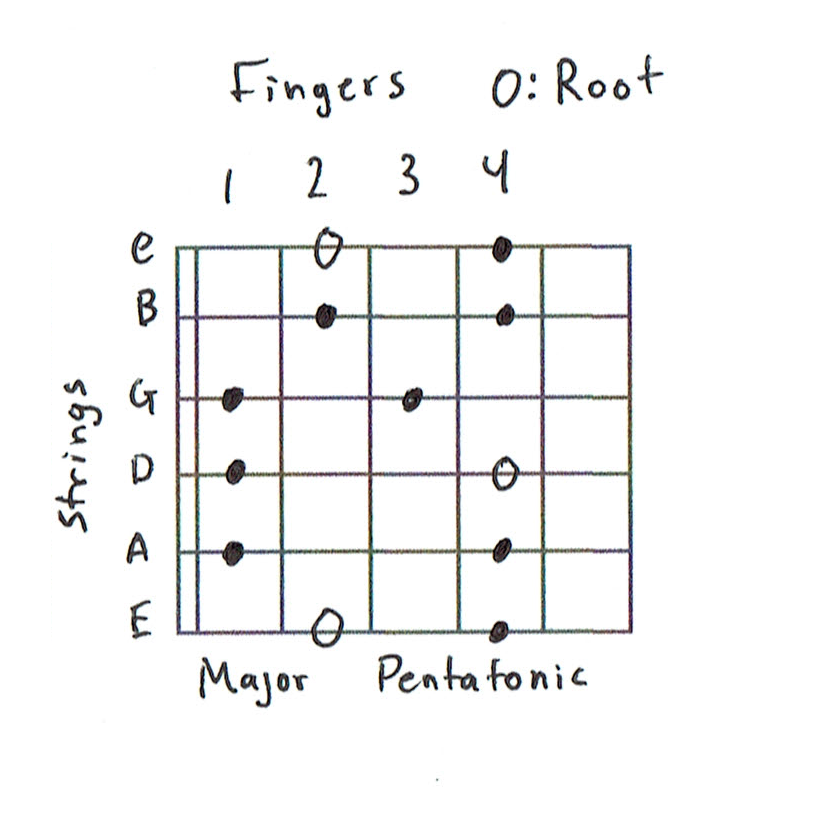 These two patterns provide a great introduction for guitar players new to the world of scales.

But what if you want to start moving up and down the fret board? There are five different positions of the pentatonic scale that link together and repeat to cover the entire fret board.

You should be familiar with the first two positions, as they are the minor and major pentatonic scales.

It is helpful to think of these scales as shapes that lock together like puzzle pieces. Practice moving from one shape to another, sliding up and down to change position.

The fourth and fifth positions should look a little familiar.

They are the little siblings of the first and second positions: minor and major pentatonic scales respectively with their root notes on the A string as opposed to the E string. Knowing where your root notes are will give you greater flexibility when playing leads using these scales.

Here are a few licks that will get you used to moving around using pentatonic scales.

Once you have become comfortable using the pentatonic scales, it is time to upgrade to the diatonic, or seven note, scales.

I say upgrade because it’s good to think of these scales as more complex versions of their pentatonic counterparts in which two notes are added to a five note skeleton. Take a look at the major scale and compare it to the major pentatonic scale. 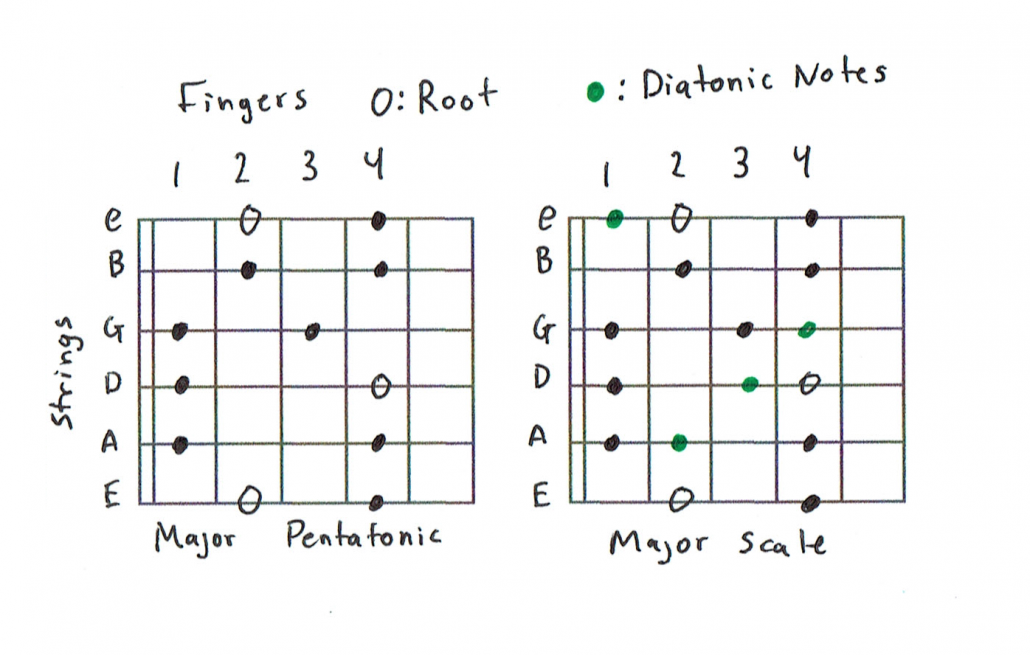 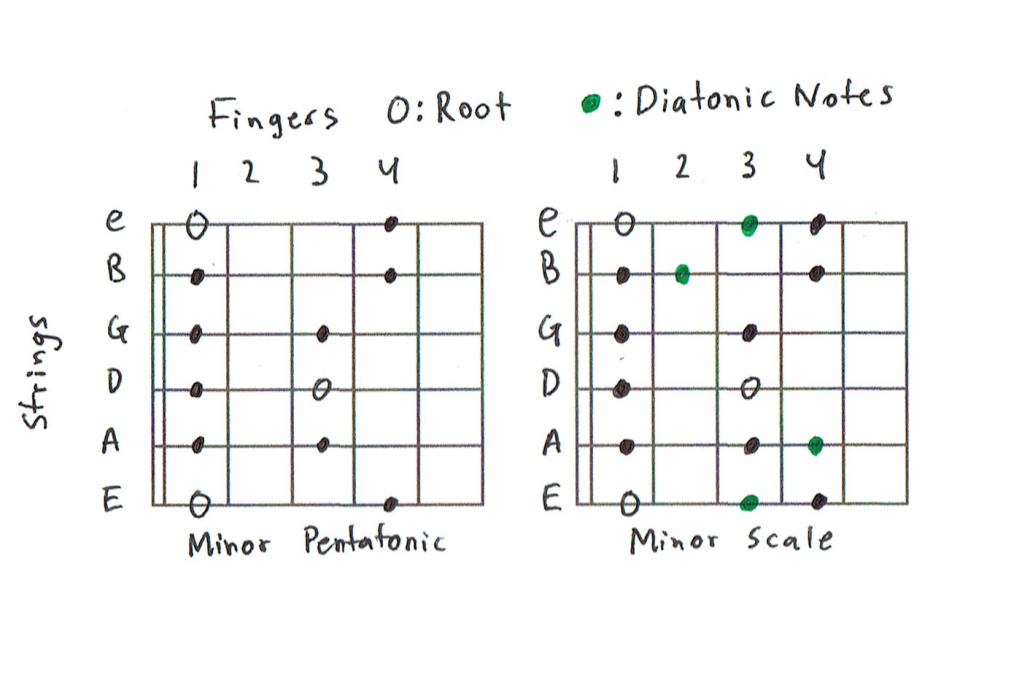 Just like the pentatonic scales, there are different positions of the diatonic scale that can be used to map out the fret board.

The major and minor scales are just two of the seven different diatonic scales known as the “modes” of the major scale.

If you were to start and end the major scale on the second note of the pattern instead of the first, you would get the second mode of the major scale, known as the Dorian scale. In fact the minor scale is just a major scale that starts and ends on the 6th note.

The Science of Scales

When we talk about scales, we use numbers, or scale tones, to identify the different notes they contains. The names of the scale tones are based on the notes of the major scale and are as follows:

The five additional notes that lie outside the major scale can be identified by adding a flat or sharp to the number name. All twelve notes that can be used to make up a scale are named below:

The diatonic scale modes each contain a variation of the 1st – 7th pattern, selecting one version of each number without skipping or repeating. To demonstrate, take a look at the scale degrees that make up a minor scale:

Before moving on, we must discuss a few essential scale tones.

The 1st, which is found in every scale, tells us what the root note is.

The 5th is a counterpart to the root. There is only one mode that does not have a 5th, but contains a b5th instead, giving it the sound of the diminished chord.

The one mode that combines a major 3rd and minor 7th creates a great deal of tension that wants to lead back to the major scale.

It is essential to be able to visualize the scale degrees and where they are located in relation to the root note. Check out this video and follow along on your guitar to get a sense of the spatial relationship between the different scale tones.

Modes of the Major Scale

Now that we have an understanding of scale degrees, we can begin exploring the seven modes of the major scale and when to use them. This is dictated by the chord progression.

Just like the use of the major or minor scales are dictated by the key, the nature of the chord progression will dictate which of the modes must be used.

Before we dive in, a quick note on chord progressions so we can properly understand the context in which these modes are used. 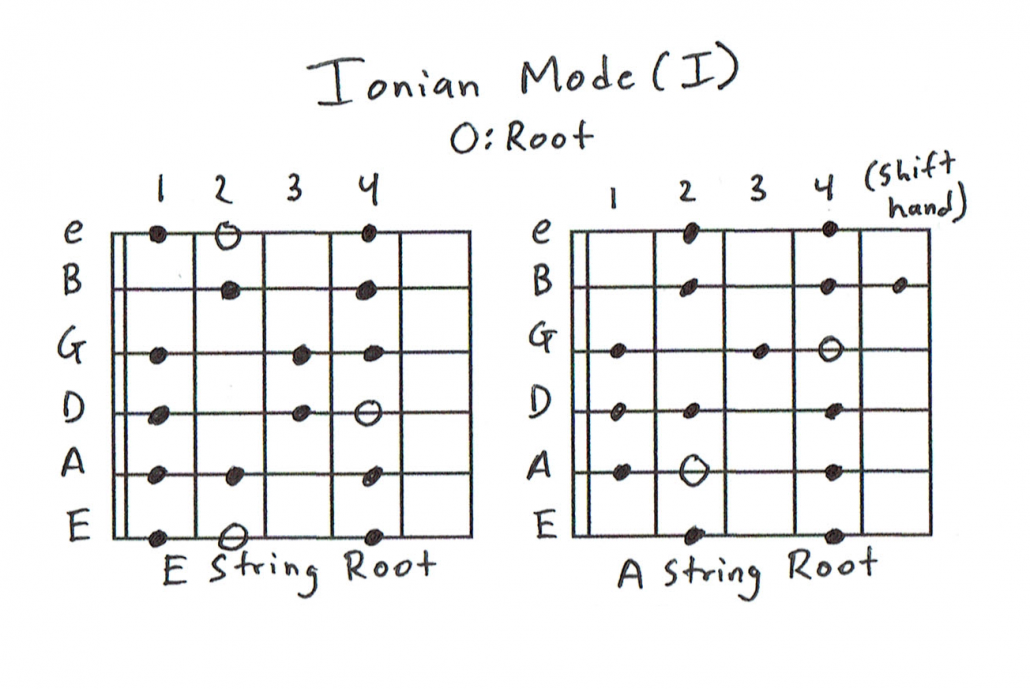 This scale is used over the I chord in progressions like I V IV (C G F).

The second mode alters the minor scale by changing the b6th to a 6th, slightly lightening the minor sound of the scale. This is a very common mode in rock, blues and jazz music. 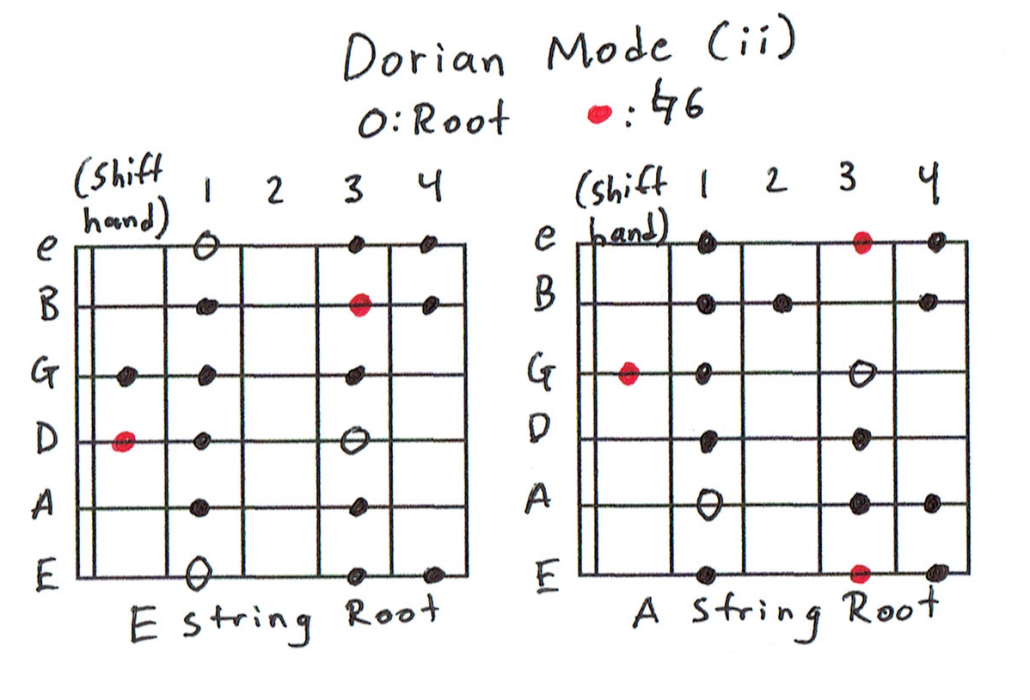 This scale is used over the ii chord in progressions like ii V (Dm G).

The third mode is also minor in character, adding the iconic sound of a b2nd to the minor scale. It has a haunting feel that is reminiscent of Latin music. 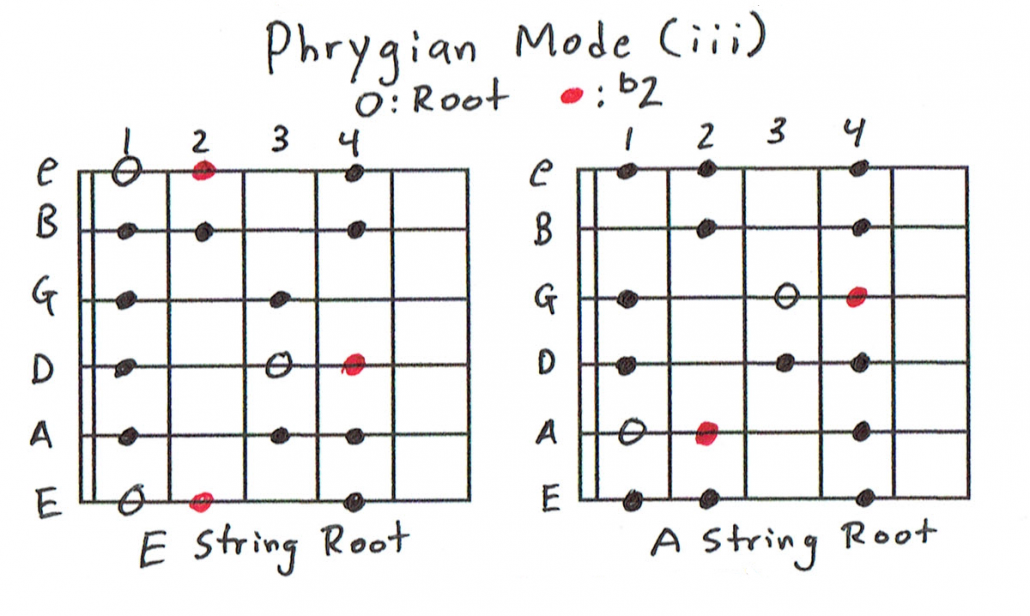 This scale is used over the iii chord in progressions like iii IV (Em F).

The forth modes is a major mode that, in my opinion, is the most beautiful of all scales.

It raises the 4th of the major scale, bringing a hint of the rare dissonant diminished sound (the #4th and b5th are the same note with a different name) to the familiar consonant major sound. 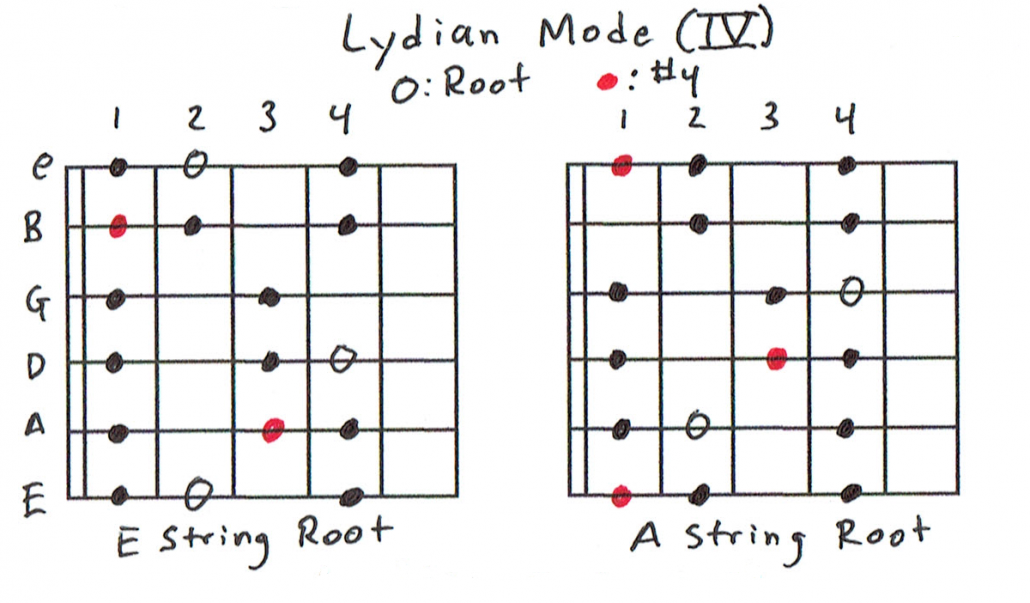 This scale is used over the IV chord in progressions like IV I (F C).

The fifth mode is major mode that lowers the seventh, mixing the minor and major sounds. As mentioned earlier, it combines a major 3rd and minor 7th to create the tension that defines the Dominant 7th sound and leads back to the I chord. Like the Dorian mode, this is another rock staple. 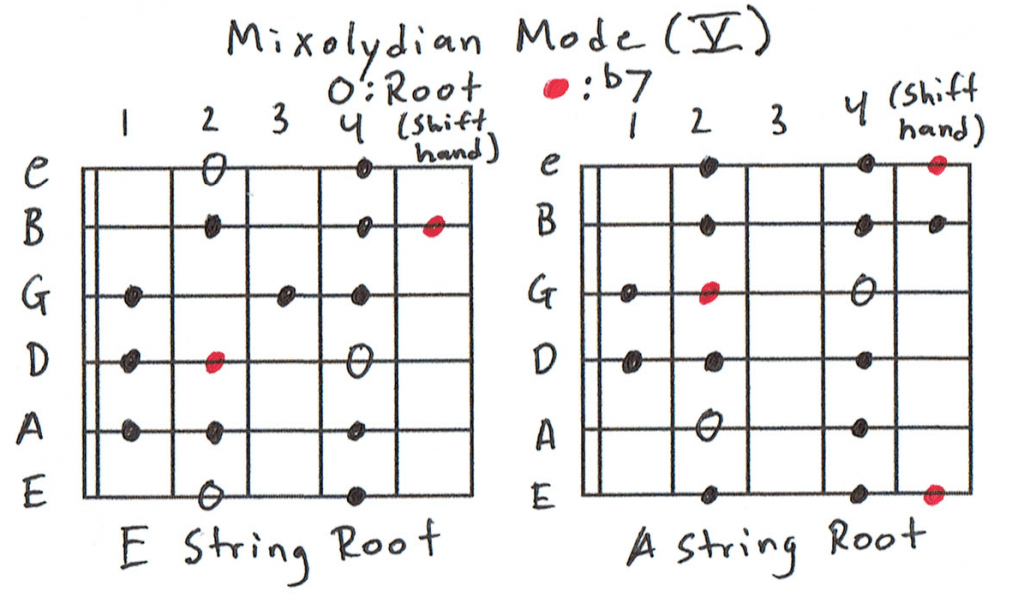 This scale is used over the V chord in progressions like V IV (G F).

The sixth mode is the minor scale. It is another of the most common modes, possessing a dark and somber sound. 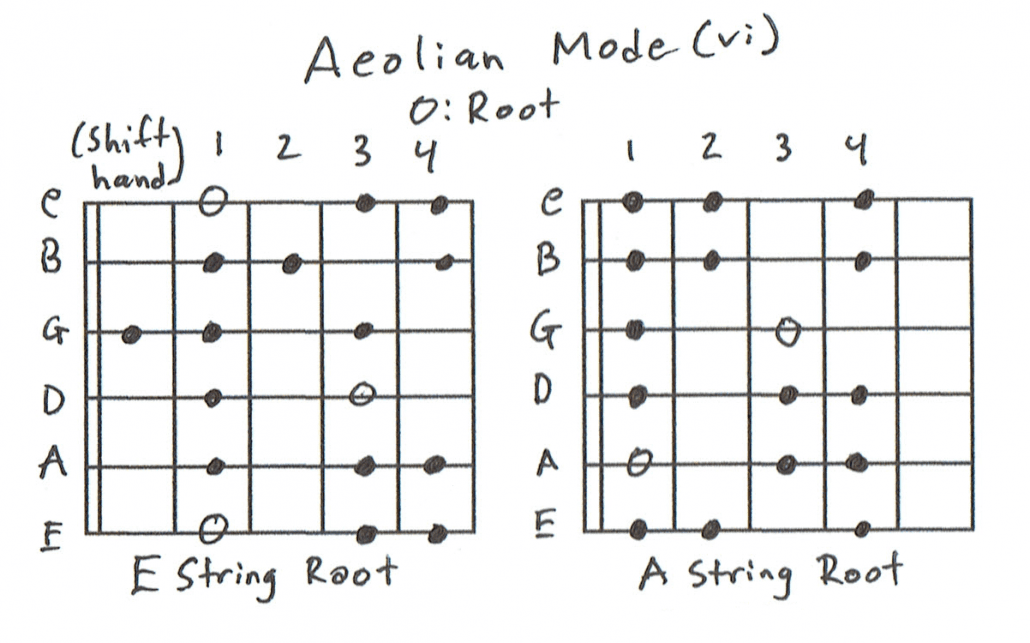 This scale is used over the vi chord in progressions like vi ii (Am Dm).

The seventh and final mode is a very rare mode.

It has a diminished sound caused by the b5th and is very harsh dissonant in nature. While it may not find common use in popular music, it can be found used in jazz music when soloists need to play over a diminished chord. 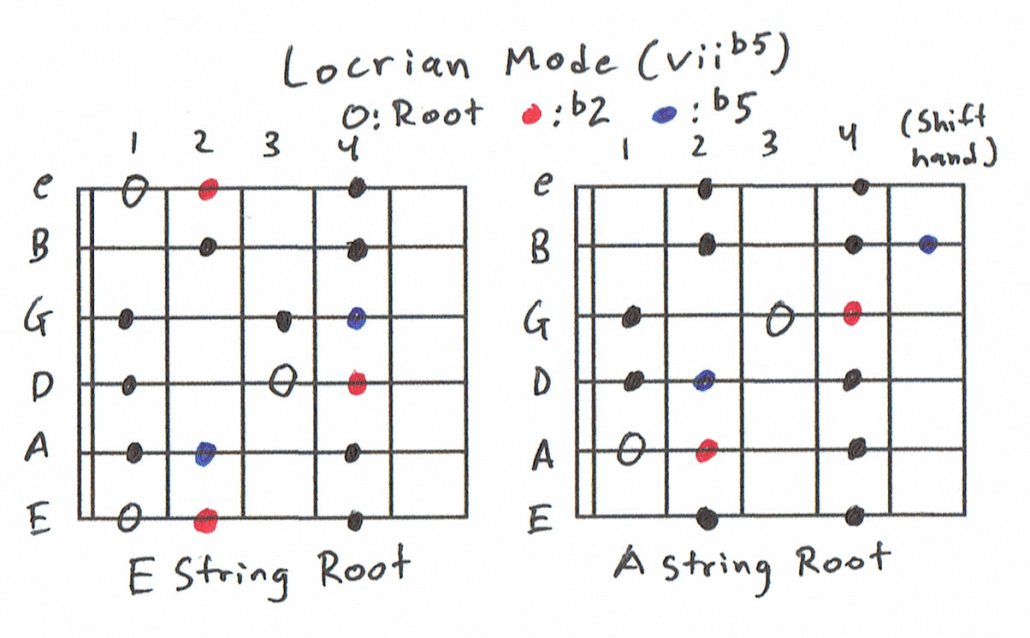 This scale is used over the vii7b5 Chord in progressions like vii7b5 III7 vi (Bm7b5 E7 Am).

If some of this is a bit confusing or overwhelming, don’t worry. It takes a long time and a lot of practice and study to fully internalize a working understanding of scales and modes.

However, I hope this has served as a suitable introduction to the wide world of scales that only gets stranger from here with harmonic and melodic minor harmony, and chord-scales that are constantly shifting with each chord in the progression.

All this aside, scales remain one of the most crucial elements of the discipline of lead guitar. So perfect your pentatonics, wield your diatonics, and explore your modes and you’ll be a giant leap closer to mastering lead guitar.

Looking for more on lead guitar? Check out this tutorial on using guitar arpeggios!

Hi Aaron, thanks for the suggestion! This article is the first part of a series on learning and mastering lead guitar theory and technique. The full title is Mastering Lead Guitar: Guitar Scales 101, which hopefully is descriptive enough to give most readers the expectation that this article will focus mainly on scales. Hope that's helpful!

It's a bit hard to follow since it isn't clear where you are on the fretboard.

Hi Tad, All diagrams start in the first fret, looking at the diagrams you can see a double line which represents the nut and five frets after that. Hope that helps you out.
Comments are closed

Get the secret to playing hundreds of popular songs in this live online class. In this group guitar class, you’ll learn a sequence of four easy chords that make it easy to play many of your favorite songs. Once you’ve learned these chords you’ll be able to apply them to different genres as well.
Wed 12/31 @ 4:12pm PST Learn More

Get the secret to playing hundreds of popular songs in this live online class. In this group guitar class, you’ll learn a sequence of four easy chords that make it easy to play many of your favorite songs. Once you’ve learned these chords you’ll be able to apply them to different genres as well.
Wed 12/31 @ 4:22pm PST Learn More

In this class Steven will show you what an Arpeggio is. And how to play an Arpeggio across the fretboard using different root notes.
Mon 9/26 @ 8:00am PDT Learn More

In this class, students will learn how to tune the guitar, play creative warm-ups, learn exciting scales, and sneaky secrets to build hand strength and playing skills quickly. Every class with explore various effective strategies that prepare you to make beautiful music. All learning materials will be shared with you during class. If you prefer, you can download and print the learning materials, so you can practice throughout the week. The only things you need to bring is your guitar, pick, headphones, and a smile. See you soon!
Mon 9/26 @ 3:00pm PDT Learn More
Learn Guitar Free Today