Learning to play the guitar is a task that’s undertaken by thousands, if not millions of people each and every year. The guitar, as the second most popular musical instrument in the world (right behind the piano at number one), is the peoples’ choice for a myriad of reasons.

Most commonly, however, people decide they want to play the guitar because of how prominently it’s featured in today’s top music. Many people enjoy pop music because it’s catchy and the lyrics are infectious. The guitar is an easy avenue for those wanting to play their favorite pop songs. It’s also a great instrument to play while singing simultaneously.

While most of us can’t simply pick up a guitar and start playing without instruction, the process of learning to play a song is fairly straightforward. Once you understand the guitar’s notes, it’s time to learn chords, and then chord progressions.

Chords on the Guitar

You’ll notice on your guitar that each fret is separated by a metal strip. These metal strips allow you to change the pitch of a string by altering the length between the string and the bridge. To play a chord, you’ll need to use the scale to put together notes. Three or more notes together create a chord. 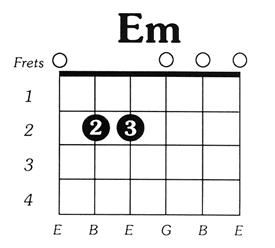 You’ll often see chords notated as in the chart above. The six vertical and five horizontal lines represent your guitar’s fretboard.

If you’re confused by the layout of the image above, hold your guitar in front of you so that the strings are facing you and the headstock is pointing up. The image of the chord chart represents this same view of your guitar, with strings running vertically and frets horizontally.

When you look at a guitar chord chart, you’ll notice that there are X’s, unfilled O’s, and filled O’s. The filled O’s will also sometimes contain numbers. The numbers represent which finger you should use to fret the note.

Guitar beginners often get confused with the term “chord” and the term “note.” A chord is a set of notes, usually three, that are played simultaneously. For example, the C major chord contains three notes: C, E, and G.

These three notes strummed together create the C major chord. Try looking at building chords the same way you would use building blocks. The first note is considered the root note and the other notes in the chord are strummed after it.

Here are a few more chord charts for you to study and play:

Barre chords are played with two fingers holding down all or most of the strings of the guitar across multiple frets. The finger can be moved up or down the fret board to create different notes and sounds.

How to Read Guitar Chords

Guitar tabs are frequently used to denote the chords that are used in songs. Tabs may seem a bit more complicated, but learning to read chords is no more difficult than reading a chord chart.

The tablature will show the chords to a song from left to right, as if you were reading text. The six horizontal lines represent the strings of the guitar and numbers are attached to each string along the tab. An O represents an open note, which you play without holding down a fret.

If you see numbers like 1,2, or 3, they represent the first, second, or third fret that you hold down. When the numbers are located on top of each other, they’re played simultaneously. Strings that don’t have a number written on top of them are strings that are not played at that moment.

When you’re trying to practice chords, the easiest way to do so is to play some basic songs utilizing the most popular chords in music. There are hundreds of songs that can be played with three chords. You’ll easily find guitar tabs and chord charts for these songs without a doubt.

In many cases, the easiest songs use the C, G, D chords. Once you’ve figured out the very basics of guitar chords, try practicing with these simple songs:

Happy Birthday Song
Follow Me by Uncle Kracker
To Be With You by Mr. Big
Free Fallin’ by Tom Petty
Wipe Out by The Surfaris
The Joker by Steve Miller Band
The Middle by Jimmy Eat World
Heart and Soul by Hoagy Carmichael
Brave by Sara Bareilles

Once you’ve mastered these three-chord songs, you can move on to four-chord songs. Four-chord songs number in the thousands and span every genre of music available.

Many utilize the C, G, D, and Em chords. In fact, much of today’s popular music uses these four chords to construct their music. Some popular four-chord songs include:

Chord progressions are written with roman numerals called the Nashville numbering system. The system notes the scale degree on which a chord is created. The I is the root, the IV is the fourth note in a scale, and V represents the fifth note in a scale. The progression acts as a template and lets the musician or songwriter create a rhythm.

The I, IV, V, I (one-four-five-one) progression can be heard in much of today’s popular music. Each progression can be played in any key, which allows for endless combinations and sounds. Lowercase roman numerals are utilized to denote minor chords.

Do remember, however, that chord progressions act as a template. Because of this, there are a countless variety of progressions out there. Sure, much of today’s most popular music utilizes the same progressions over and over again, but the key and notes used are often different. This is why songs that share the same guitar chord progression don’t sound like the exact same song. Similar, but not exact. Once you’ve mastered the idea of chord progression, you’ll likely be able to pick out the most common progressions from your favorite songs.

In order to learn guitar chord progressions (instead of simply understanding the concept), you’ll need to practice common progressions. Thankfully, there are several beginner progressions that can help you easily understand how they work. Many songs are created using very basic progressions.

It can be heard as early as classical music, most notably in the work of Mozart. It, however, became immensely popular in the 1950s when the Doo-Wop genre used the progression extensively. “Monster Mash” by Boris Picket and “The Book of Love” by The Monotones are notable examples.

It was popularized in the 1990s but was seen as early as the 1950s in popular music. The progression lends itself to a slightly edgier sound. “Already Gone” by Kelly Clarkson, “Cryin’” by Aerosmith, and “Down Under” by Men at Work all use this progression.

It startles the line between a beginner’s progression and an intermediate progression. While the blues progression uses more chord changes than beginner progressions, it’s one of the most commonly used ones. It uses the standard 12-bar blues progression, although songs outside of the genre have used the progression successfully. Tracy Chapman’s “Give Me One Reason” is a good example.

Now that you know what’s expected of chord progressions, it can only get easier from here. Make sure you give yourself plenty of time to practice guitar each and every day. Remember that your progress should not be judged immediately, for learning anything requires ample time for it to sink in. Give your new chord progressions some weeks to improve and hopefully you’ll be surprised by how far you’ve come. Happy strumming!

An awesome primer, thank you. I've been tinking around for years with my guitar and thought I should finally seek out understanding the basic concepts.

Amy, Check out the <a href="/live/guitar" target="_blank" rel="noopener nofollow">guitar classes at TakeLessons Live</a>! They're great for mastering the basics, and you can try the classes for free. :)
Comments are closed

Get the secret to playing hundreds of popular songs in this live online class. In this group guitar class, you’ll learn a sequence of four easy chords that make it easy to play many of your favorite songs. Once you’ve learned these chords you’ll be able to apply them to different genres as well.
Wed 12/31 @ 4:12pm PST Learn More

Get the secret to playing hundreds of popular songs in this live online class. In this group guitar class, you’ll learn a sequence of four easy chords that make it easy to play many of your favorite songs. Once you’ve learned these chords you’ll be able to apply them to different genres as well.
Wed 12/31 @ 4:22pm PST Learn More

Modes, They Aren’t So Difficult

We will learn the order in how to learn information to easily tackle and understand the who what when where and why you absolutely should learn the modes before any other scale! If you learned the common lie of the pentatonic blues shortcut… let’s start over right here!
Thu 5/19 @ 10:00am PDT Learn More

Have fun learning to play rhythm and forming guitar chords! In this course you will gain an understanding of how guitar chords work within a key signature, develop an ear for chord changes, technique for how to play chords, and changing tempo. You will be given tools and a worksheet to write down your own chord changes that you can apply to your skills as a songwriting method. The benefits of studying rhythmic guitar are improved listening, muscle and motor skills, songwriting, playing simple pieces and gaining an understanding of chords and their families.
Thu 5/19 @ 3:00pm PDT Learn More
Learn Guitar Free Today