Want to learn how to spice up your songs with guitar arpeggios? For many guitar players, learning how to play a memorable solo is a constant journey. A big part of this is knowing what notes to play and when to play them.

The first step is to learn how to play a scale over the key of the song (if you’re not familiar with basic scales, check out this article: Guitar Scales 101). The journey does not end there, however.

Once you’re comfortable playing in key, it’s time to follow each of the chord progressions using guitar arpeggios. Arpeggios are chords played one note at a time, instead of simultaneously.

You can think of them as three- to four-note scales made up of chord tones (the tones used to make up any given chord). These types of note collections allow players to imply the chord changes, even when playing alone.

Each passing chord becomes a new opportunity to harness the melodic power of following the chords with their corresponding arpeggios.

What is an Arpeggio?

When we think about the notes in an arpeggio, we’re essentially thinking about chords. Like chords, the two most basic types we must learn are major and minor.

Here are two very basic examples of major and minor arpeggios, mostly for demonstration. These movable shapes are illustrated with each note identified by its interval number, with the root note circled in red.

As you can see, each contains three notes: the root, the third, and the fifth, just like a triad chord. You can also see that the only difference between these two is the major third in the major chord and the minor third a half-step (fret) below in the minor chord.

While arpeggios, like chords, can get much more exotic, these two patterns are the building blocks for all arpeggios.

Guitar Arpeggios on the Fretboard

Now the challenge begins: how to find the right arpeggio to play over the right chord at the right time. The best way to address the mountains of memorization required to do anything on a musical instrument is to master one piece at a time.

This means learning one good major and one good minor arpeggio shape. Here are two shapes I personally love using:

As you may have noticed, these two contain almost the same set of notes. You may also have noticed that both fit very nicely with the 4th position of the pentatonic scale. 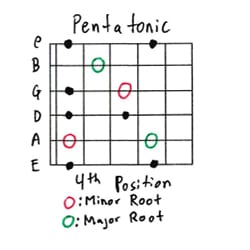 Half the battle of playing these notes is learning how they relate to the scales and chords you already know. Practice changing between the 4th position pentatonic scale to these arpeggio shapes to get comfortable with how they fit over each other.

The chord chart below shows one of the most common chord progressions used by jazz musicians, the ii V progression. Using the arpeggio shapes you just learned, you can easily take your first steps into the world of following the changes.

We start off as usual with our Dm pentatonic (4th position 5th fret) over the Dm chord of the first bar. Once we reach the G in the next measure, we need to play a G arpeggio.

Using the C-shape rooted at the eighth fret of the A string, we get a whole new pallet of colors with which we can paint over the new chord.

Due to the relationship between these chords, moving between them feels just like you’re moving your pentatonic scale up a whole step (two frets) every time the chord changes.

When you shift back to the Dm, make sure to emphasize the chord tones contained in the arpeggio (Am shape 5th fret A string).

Play over this backing track and get accustomed to listening for the changes and using guitar arpeggios to shift playing positions. As Obi-wan Kenobi would say, “you’ve taken your first step into a larger world”.

Now that we’ve seen the power of this new approach, it’s a good time to present all of our major and minor arpeggio shapes. Again, don’t worry about memorizing all of these patterns at once. Instead, find the ones that you find most useful and work them into your playing.

Each chord type has five different shapes (all named after open chords they resemble according to the CAGED system). If you’re familiar with barre chords, these shapes should look very familiar. Practice playing these patterns; make sure only one note sounds at a time.

Practice playing these patterns; make sure only one note sounds at a time.

Let’s take a step back from the large-scale patterns and break guitar arpeggios down to their smallest parts; intervals.

Knowing the spatial relationship between chord tones on the fretboard (i.e. where the fifth is in relation to the root) is crucial to understanding arpeggios patterns, as opposed to simply memorizing them.

While these relationships change slightly when the B and high-E strings are involved due to the guitar’s tuning, you will soon get used to the different variations of intervals all over the fret board.

For every chord, there’s an arpeggio. So what do we play when we encounter an E7 or (god forbid) a Bm7b5? There are different shapes for each of these chords that we can discover by adding and or altering notes in the major or minor patterns.

Above, we see five different types of 7th chords. Perhaps the most common of these is the dominant seven arpeggio that we’d play over chords like E7. Think of it as a major arpeggio with the addition of the minor 7th (b7) chord tone two frets behind the root.

These chords come up constantly, often as alterations to the original key (secondary dominants for those familiar with theory). These arpeggios will allow you to follow alterations from the key without having to over think things.

A fully-diminished arpeggio alters the half-diminished by lowering the b7 to a double flat 7 (bb7), which can also be thought of as a natural 6th.

You will likely find these being used as transition chords that take advantage of leading tones to create tension when bridging the gap between more typical chords.

Begin exploring each type of 7th chord arpeggio by learning the single shapes presented above. Once you feel comfortable, you can practice their other four shapes.

Following the Changes with 7th Chords

For our final exercise, we will play over the ‘minor turnaround,’ a common jazz progression that contains both the dissonant half-diminished chord and a minor key dominant V chord borrowed from the harmonic minor scale.

This last chord alters one of the tones from the natural minor scale to add tension that pulls the listener back to the minor root.

Begin with a Dm pentatonic scale (try 4th position 5th fret A string), emphasizing the chord tones of the arpeggio. In the next bar, we encounter an Em7b5 chord.

Try using the half-diminished C shape rooted on the 7th fret of the A string. This position fits very nicely with our previous pattern, allowing an easy transition.

Finally, we encounter our A7 chord on the last two beats of the second bar. The major 3rd in this chord is an alteration from the original key that acts as a ‘leading tone’ that resolves up a half-step to the root note of the Dm. This creates tension, giving character to the chord progression.

Make sure you emphasize this chord tone and try resolving up when switching back to the Dm. The dominant 7 E shape fits nicely with our other two arpeggios.

Guitar arpeggios are complex and challenging, and take a lot of time and energy to master. Don’t get discouraged if you have trouble memorizing arpeggios or following fast changes.

Remember, this is just another tool in your toolbox as a lead guitarist. There’s nothing wrong with sticking to the scale; it’s your foundation and your safety net. Think of guitar arpeggios as an extra special ingredient you can use to spice things up.

Look at chord changes to your favorite songs and try to work arpeggios and the strategy of chord following into your playing. Though this may be a daunting chapter in your journey, I guarantee it will take your playing to the next level!

Need some help with arpeggios or other guitar techniques? Sign up for lessons with a private guitar instructor or try group guitar classes here at TakeLessons Live.

Get the secret to playing hundreds of popular songs in this live online class. In this group guitar class, you’ll learn a sequence of four easy chords that make it easy to play many of your favorite songs. Once you’ve learned these chords you’ll be able to apply them to different genres as well.
Tomorrow at 2:00pm Learn More

Learning new chord progressions will allow you to play more of your favorite songs! This online guitar class will review basic chords and introduce you to a few new ones so you can continue adding to your guitar toolkit.
Monday at 2:00pm Learn More

This online guitar class will teach you movable chord shapes to enable you to play even more songs than you thought you could! We’ll also spend some time reviewing chord changes and solos. At the end of class, we’ll discuss the next steps you can take to continue practicing on your own. These steps will further your guitar playing skills to the next level!
Monday at 4:00pm Learn More

Chord Progressions for All Levels

In this guitar class, you will learn and practice chord progressions with a professional touring guitarist and expert instructor. Get ready to learn practice techniques that really work in a fun, supportive group environment with other students. If you're looking to expand your guitar playing skills, this is the class for you.
Wednesday at 2:00pm Learn More

Guitar for Beginners: How to Play Guitar Scales

This group class is the perfect introduction to guitar scales for beginners. You’ll start with the A minor pentatonic scale, which can be used in a variety of songs. You’ll also get valuable practice time as you play along with other students in an interactive setting. Learning about scales will drastically improve your musicianship!
Wednesday at 3:00pm Learn More

Want to improve your guitar technique? Students of all skill levels are encouraged to join this group guitar class where you’ll learn warm ups, how to navigate the fretboard, and more. You’ll also discuss how to include your whole body in your playing to help with posture and release tension.
Thursday at 12:00pm Learn More

Guitar for Beginners: Learn the Basics Plus Easy Chords to Get You Started

This beginners’ guitar class is an excellent starting point for those wanting to learn the basics of the instrument. Your instructor will cover how to hold and tune the guitar. You’ll also learn easy guitar chords and how to switch between two chords. Having a solid understanding of these concepts will set you up for success on the guitar!
Friday at 1:00pm Learn More

Guitar for Beginners: Essential Tips to Stay on Beat

In this helpful guitar class for beginners, an expert instructor will introduce new strumming patterns. You’ll learn about how to use a metronome, as well as how to play the different parts of songs in popular music. Each exercise we do as a class will help you fully grasp these new concepts.
Jun 8 at 3:00pm Learn More

Get instant access to expert teachers with hundreds of live streaming lessons available 24/7.