Your days of bedroom jam sessions are over — it’s time to start your music career and hit the road! In this article, traveling musician and guitar teacher Nick K. discusses his experience with guitar gigs and gives you tips on how to make them successful…

I’m what they call a “hired gun.” That’s a cool title for what’s otherwise referred to as a traveling performer or musician for hire. I’ve done a lot of touring with a great group called The Three Degrees.

They had worldwide smash hits in the 70s, such as “When Will I See You Again,” and “Dirty ol’ Man.” They formed out of the Philadelphia music scene in the 1960s and were on the same label as famous artists such as Patti Labelle and Harold Melvin and the Blue Notes.

As a group, they’ve been together for a long time and know exactly how their music should sound. Therefore, it’s my job as a hired gun to deliver exactly what they want, but at the same time, try to add some of my own flair and style into the mix.

Where to Find Guitar Gigs

The first step in landing your next big gig is knowing where to look.

You can find guitarist wanted ads in your local classifieds or on Craigslist, or on websites like Gigsalad and GigMasters.

How to Get Gigs for Guitarists

When you respond to that musician’s wanted ad, be sure to put your best foot forward. If you’re sending an email, include video of yourself performing live as well as a resume listing your past gigs and other musical accomplishments.

You should also ask the band which songs they would like you to learn for your audition, and then really learn them! This shows that you’re a team player with the dedication and commitment a gig like this requires.

Playing With a Group

You may play a musical passage exactly as you’ve heard it on record, but until you start playing with the group, you don’t know if that’s exactly what they want. For example, I was playing a guitar riff and the band members told me they wanted it to be “less choppy,” meaning that they wanted it smoother and with less complicated rhythms.

As a hired musician, it’s your job to make sure you interpret the artist’s requests accurately and come up with a suitable alternative part. Therefore, creativity is an important and essential element when being used as a hired gun.

It’s never your place to question their authority, simply because it’s not your band. Therefore, you must do as they request and do a good job of it.

Letting go of your ego is essential when playing for someone. If you don’t like authority, or someone telling you what to play, then this guitar gig is probably not for you.

If you approach things with the right attitude, it’s one of the most fun and rewarding experiences you’ll ever have.

Understanding musical terminology is an essential part of being a hired musician. Here are some terms that are frequently used:

Stab
A rhythmical accent played together as a band.

Repeat markers
The markers that indicate the start and end section of a loop.

1st and 2nd time ending
Inside the repeated section, there are subsections that vary depending on whether you are playing the 1st time round or the 2nd.

Soli
Musical phrase played in unison as a band.

Coda
The last section of a song indicated on the sheet music by a coda sign.

Reprise
When the music comes back in after being finished.

Understanding these terms makes it easier for the musicians to communicate with each other and be on the same wavelength.

A lack of understanding will slow down the whole band. It’s impractical to do this, so learning the lingo is really an essential part of being a good gigging musician.

A certain amount of detective work may be necessary when learning the songs.

When I toured with The Three Degrees, I ended up learning 3 versions of every song. I was sent the original MP3’s of the songs, along with live versions that are often in different keys than the originals and may even have a different feel or different guitar parts.

I had to learn an approximation of both of these versions so that I’d be well-equipped during rehearsals to play whatever they requested of me. However, a certain amount of personal taste may be required in determining the appropriate parts.

During our first rehearsal (and there was only one), things were changed around. Ultimately, the final version may turn out to be different from both the live and studio versions — always be prepared for change. 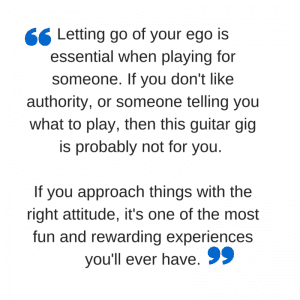 How to Choose a Guitar

Your choice of guitar is also more important than you may think. It wouldn’t be a good idea to show up to a gig with The Three Degrees with an Ibanez Jem, for example.

For this gig, I chose more traditional guitars that I love – my Stratocaster and Telecaster.

These guitars not only fit appropriately in terms of sound, but also in terms of look. If you’re going to get into the professional realm, it’s good to have some classic guitars that can fit into many different genres.

The Strat, for example, can be used in funk, pop, rock, soul, blues, country, and even jazz. It isn’t totally necessary to have tons of guitars, but it’s nice to have some of the main classic guitar types.

I always take more than one guitar with me on tour in case a string snaps on stage. That way I can quickly change guitars without having to spend time changing strings on stage, which is too time consuming in a live situation. It’s also good to carry extras of everything in your guitar gig bag.

The last piece of advice I can give is extremely important — always be on time!

Make sure you get to the sound check early to set up any amps or pedals and to also get your guitar in tune. If there’s something wrong with your amp, you’ll have time to get it fixed before the singers get there.

Selecting the right amp initially will reduce any errors you may encounter later.

I always say that it’s better to be two hours early than two hours late! Also, dress well, polish your shoes, and iron your shirt – oh, and don’t forget to shower! With all of this in mind, you should be all set for a glittering music career. 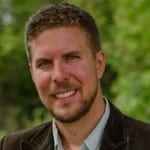 Post Author: Nick K.
Nick K. teaches guitar, acoustic guitar, and music theory in Pasadena, CA. He’s been playing guitar for over 20 years and has taught at some of the topmost music schools in London and New York City. Learn more about Nick here!