Got the gig? Great! Now… what should you bring? Read on to learn about the electric guitar accessories that Charleston, SC teacher Christopher A. recommends stowing in your gig bag…

As you get into playing guitar, opportunities may arise to showcase your talents in a live setting. Regardless of the performance location, be it a bar, coffeehouse, or your high school gymnasium, there are a few essentials you should carry with you in your gig bag or guitar case. Making a list of items you need for the gig allows you to double check that everything makes it into your car, so you don’t arrive missing a key piece of gear, like your instrument cable or microphone. Here are a few staples that most working musicians I know carry to every gig:

Extra Strings
It’s always great to be prepared in case a string breaks mid-show. Having a spare set can keep you from having to play a five-string guitar for your gig.

String winder and pliers
These tools allow you to change strings quickly and remove the excess so your instrument looks good should you have to replace a busted string mid-show.

Instrument Cables
You never know when a cable will break or someone will accidentally step on your pedalboard and break it, so carrying a spare instrument can save you from a silent performance or help out a bandmate who left one at home.

Capo/Slide
These two tools are key when backing a vocalist who may need to raise or lower a song’s key, and should always be in your bag. The slide, while not used on every song, can easily be clipped into the capo for easy travel, and both can attach to a mic stand for quick access during a show.

Strap
Bring a spare strap in case your main one breaks.

Picks
Wait, isn’t it common sense to have a pick on your person for a show? Sure, but when you’re mid-song and your pick flies from your fingers because it’s a hundred degrees and you’re sweating profusely, you will need a suitable replacement, so having a few extras in your gig bag ensures you can shred on.

Power Cable
Most of today’s amps use IEC type cables that are easily detached before and after powering on your amp, so make sure you carry a spare in case you lose the original on the way or forget to pack altogether.

Instrument Stand
Manufacturers have figured out ways to make smaller stable instrument stands and having one will allow you to have a spare guitar on that stand or somewhere to rest your instrument during set breaks. No one wants to leave their cherished instrument leaning on an amp during a break only to see it fall as your bandmates rush to speak to their friends in the crowd.

Fuses/Tubes
There are times power circuits in a club can trip breakers or fry the fuse in your amp. Having a spare fuse or two that precisely match the voltage and amperage your amp needs can save the day. Likewise, sometimes power tubes or preamp tubes fail, and having a spare can allow you to carry on provided you don’t have to re-bias your tube amp on the spot. That brings me to the last item I suggest you carry:

Power Amp
In the rare instance that your fuse is blown or a tube fails and you’re 30 miles away from home, it’s a good idea to have a spare amp or backup in your possession. Some of my friends use amps like the Crate PowerBlock as a backup that stays in their car for any emergency like this. I use an Electro Harmonix 22 Caliber amp. It is the size of a standard stomp box but has a 22-watt power amp built in that goes from instrument to speaker in your amp, and has a volume and bright switch. Once my band was doing a television morning show and somewhere between my house and the studio the fuse and its retainer fell out. I was ready to play and I flipped the power but nothing happened. Luckily I had the little 22 power amp in my bag, so I powered it up and the show went off without a hitch.

Most of these electric guitar accessories you probably already have among your gear. You don’t need all of them to have a successful gig, but having spare strings, cable,s and picks can keep a situation from ruining your show. I didn’t place a tuner on my list because my pedalboard has one, but the clip-type tuners take up little space and can make sure your instrument is harmonious and ready for whatever you want to play on it. Failing to prepare is preparing to fail, so take a few minutes and check your gig bag before your next show. Being prepared for anything allows you to focus on making music and not running home or to a music store to save the day. 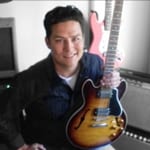 Christopher teaches mandolin, violin, music performance, and guitar lessons in Mount Pleasant, SC, as well as online via Skype and Google Helpouts. He has over ten years of experience in teaching in classrooms and studios, and his lessons focus on providing the budding musician with the tools to become a proficient player.  Learn more about Christopher here!