In this guest podcast, Caroline from French Blabla reveals several simple conversation hacks that will help you use the French subjunctive correctly, or avoid the need to use le subjonctif in the first place. Quelle bonne idée!

What is the French Subjunctive?

The subjunctive is not a verb tense so much as a verb mood used by the French to express feelings, uncertainty, or opinions.

We use the subjunctive in English too, but you might not have noticed it. For example, when you say things like, “If I were president…” or “I wish you were here,” you’re using the subjunctive.

How to Conjugate Regular Verbs in the French Subjunctive

Like other verb tenses, the subjunctive follows patterns for regular -er, -ir, and -re verbs.

To conjugate a regular verb in the subjunctive, take the present tense 3rd person plural form of that verb, remove the ending and add on the following endings instead:

Many subjunctive forms for –er verbs are the same as for le present, which can make it easier to use the subjunctive correctly. If you’re wrong about whether a verb should be subjunctive, people can interpret it as the present tense that would often likely take its place.

Here are a few regular verbs conjugated in le subjonctif:

How to Conjugate Irregular Verbs in the French Subjunctive

Irregular verbs have their own, irregular roots. Here are a few examples:

For être and avoir, when the “i” is doubled in the nous and vous forms, it turns into a “y,” like this: nous soyons, vous soyez, nous ayons, and vous ayez.

For some irregular verbs, you can still look at the 3rd person plural present tense to find the subjunctive root. For example:

Don’t count on this always being the case, however. If you’re not sure about a new irregular verb, you should look up the root.

How to Use the French Subjunctive

In French, there are a number of phrases that trigger use of the subjunctive. You will almost always use the subjunctive in dependent clauses that follow que or qui.

Here are some common phrases that you will follow with a subjunctive verb:

For example: Je veux que tu viennes avec moi. (I want you to come with me.) 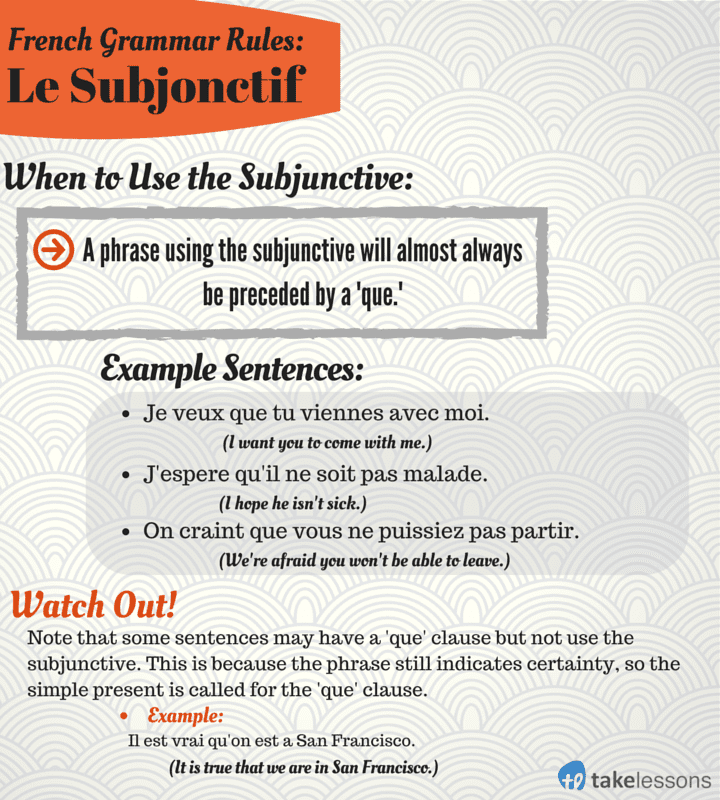 How to Avoid Using the French Subjunctive

If the subjunctive still makes your head spin, Caroline offers a few tips in her podcast that will help you avoid having to use it.

In phrases like je pense que, you typically use the indicative, however if you say je ne pense pas que, you must follow it with the subjunctive.

To avoid using the subjunctive, move the negation to the second part of your sentence. For example, “je ne pense pas qu’il vienne,” can be changed to “je pense qu’il viendra pas,” eliminating the need to use the subjunctive.

Another way to get out of using the French subjunctive is to use de instead of que. You can follow de with the infinitive form of the verb, making this one of the easiest ways to avoid the subjunctive.

One important thing to note about this method is that using de instead of que does slightly change the meaning of your sentence, making it more general. You can make up for this changed meaning by adding another sentence.

Tip #3 – Use a Different Expression

Instead of “il est possible que,” you can say “il est probable que,” or “peut-être que.” Both of those expressions use the indicative rather than the subjunctive.

And there you have it. Now you know what the French subjunctive is, how to conjugate it, and how to use it. Plus you have some great tips to help you avoid having to use it if you’d prefer not to. The best part is, if you follow Caroline’s advice, you’ll always sound like a native speaker.

What do you think? Is the subjunctive a little simpler for you now? If you have any lingering questions, let us know in the comments below or ask a French tutor for help!

Caroline is a passionate French teacher, host of the French Blabla podcast. Her mission is for you to speak like a native. You can find more episodes of her wonderful podcast on her blog.