Many French students struggle with their pronunciation at first. Try these practical tips from opera voice teacher Elaina R. to get the right sounds out…

French is beautiful. Almost muttered, flowing from vowel to vowel, French has earned a reputation as the “language d’amour.” Why is it, then, that everyone in your French class sounds so utterly unromantic?

Put succinctly, it’s because English and French have very different phonetic rules. Lots of letters are pronounced completely differently in French than they are in English. Letters that we would pronounce are silent. There are some vowels, such as combination and nasal vowels, that don’t exist in English at all.

That being said, fixing just a few things can transform your pathos-inducing accent into something a little more authentic. Avoid these common mistakes to put a beatific smile on your French tutor’s face.

What do Americans say when they’re at a loss for words? Uh…yep, that’s it! Say “uh” a few times–this is more or less the French schwa.

The schwa, or neutral vowel, appears wherever there is an unaccented E: “je”, “me”, and “seraine” are a few examples. Do not pronounce these as regular American E vowels; it could change your meaning entirely.

Speaking of the French schwa, lots of Americans mess them up by adding diphthongs. In English, we close our mouths at the ends of vowels. For example, an American pronounces the word I by saying something like “aaee.”

French, like other Romantic languages, does not have diphthongs. If you want a terrible American accent, go ahead and pronounce “je,” the French word for I, with a diphthong. You’ll get something that sounds like “jay,” along with an eye roll from native French speakers.

Many French words end with unpronounced consonants. Take, for example, the title of one of my audition arias: “Les Oiseaux dans la Charmille”. In this short phrase two word have silent endings: oiseaux and dans. When spoken, this phrase sounds kind of like “lez wazo da la shar meal.” Pronouncing the ends of the words ruins the smooth lilt of the French language.

4. American R instead of Uvular R

In American English, we pronounce the letter R by drawing our whole tongue up to the roof of the mouth. The French, especially in Paris, use a uvular R instead. Only the back of the tongue (the part near the uvula, that dangly thing in the back of the mouth) goes up. Try doing it in front of the mirror and making sure the front of your tongue stays down.

In English, we put emphasis on words using consonants, especially aspirate consonants like T and C/K (take that cat out!). Aspirate simply means that the vowel is followed by a little puff of air, as in the English letter H (hurry, half).

French is centered around vowels, and there are no aspirate consonants. The letter H is silent (as in hiver). T and C/K consonants are pronounced dentally–farther back in the mouth than we say them in English. Place your tongue right behind your front teeth and practice saying these vowels there.

For even more tips on how to perfect your French accent and pronunciation, check out this quick video lesson.

This is hardly an exhaustive list of the many French pronunciation rules, but it is a start. Avoid these common mistakes and you’ll already be better than most Americans who study French. By ensconcing these rules in your memory and continuing to learn more, you might get rid of that pesky American accent altogether. 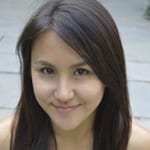 Elaina R. teaches opera voice and singing in Ann Arbor, MI, as well as through online lessons. She studied French diction for a year as part of her opera voice training. She is currently working on a Master of Music at the University of Michigan, and she has a B.M. from the University of Southern California. Learn more about Elaina here!