What makes a great guitar song? Between the soaring electric guitar classics and the mellow acoustic numbers, practically anything is possible with the instrument. The power of the guitar spans across genres and musical eras and has played a key role in countless popular tunes.

Whether you’re looking for a famous song to learn on guitar or want to discover some of the best players of all time, this list will point you in the right direction. Our top 50 acoustic and electric guitar songs represent certain moments in history that solidified the guitar as one of the most versatile and expressive instruments out there.

Although the following list is by no means comprehensive, you can use it as a guide to dive deeper into the various guitar genres. Since everyone’s list of the “best guitar songs” will be different, we encourage you to leave a comment below with your top tunes!

50 Famous Songs to Learn on Guitar

Before we dive into which songs made the list and why, check out this clickable infographic for a preview of 25 top guitar songs. 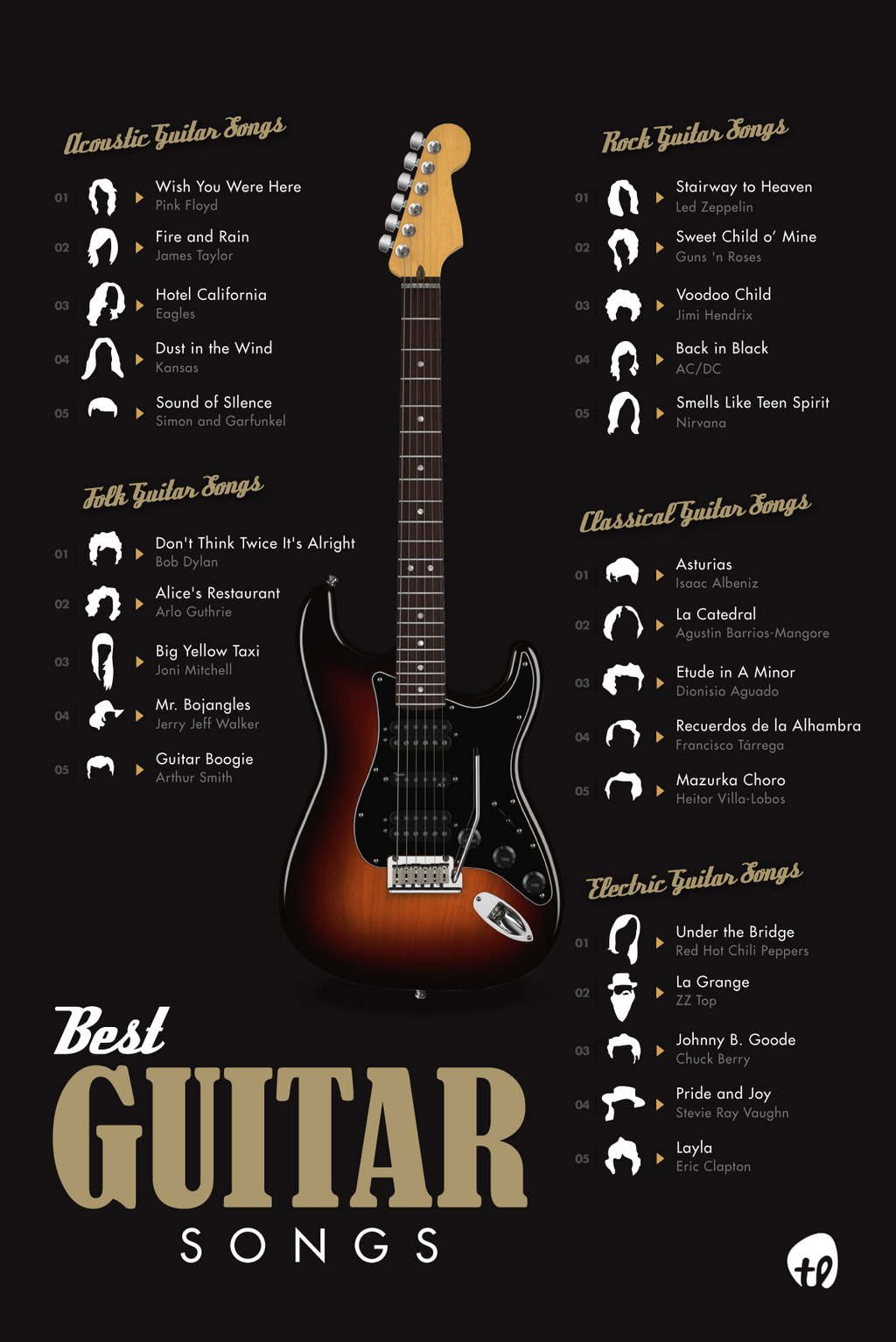 Wish You Were Here – Pink Floyd

This popular song was destined to some form of greatness because of Pink Floyd’s established reputation. The fact that the main acoustic guitar riff is so playable has also helped this song become a staple for many beginning guitarists.

This song was one of the singles from James Taylor’s second album that made him particularly famous in the 70s. To this day, he still frequently plays “Fire and Rain” in concert. It’s known to both older and younger audiences who are familiar with his music.

A reflection on the excesses of the Rock ’n’ Roll lifestyle, this classic tune features both acoustic and electric guitars. It’s also one of the most famous songs to learn on guitar for players of all ages. Beginners can start with the acoustic intro and intermediate players can explore the guitar solos!

The unassuming charm of this song, along with Paul McCartney’s memorable fingerpicking pattern, make this a favorite for beginning guitarists. The unusual left-hand intervals can be challenging at first, but stick with it and you’ll have everyone singing along.

An enchanting (and sometimes cryptic) ode to Rock ‘n Roll history, this song is still popular as a tune for beginners to learn their basic guitar chords. It’s also a great tune to develop your singing-while-playing abilities.

Released on their second album, “Wonderwall” has become Oasis’ biggest hit. It’s the most streamed song released before 2000, and it’s the archetypal example of 90s pop chord playing.

Ironically the most popular song of a much heavier band, this song was released in 1991 and has since forced its writers to embrace their softer side. Known for their heavy, funk-metal style, Extreme reached a much wider audience with this vulnerable ballad.

Dust in the Wind – Kansas

Another crowd pleaser on this list of best guitar songs, “Dust in the Wind” particularly hit a nerve during the spiritual seeking of the hippy era. The intro has charmed fingerpicking beginners since the song’s release. If you’re ready to put down the pick and learn a new fingerpicking pattern, this is the one.

Taking inspiration from Marcus Garvey, Bob stripped away all the rich instrumentation of his reggae roots and reduced this song to simply the acoustic guitar and singing. The song has remained popular both as a protest song and a staple among beginning guitarists.

Sound of Silence – Simon and Garfunkel

This song begins with a simple but haunting guitar hook that is immediately recognizable to fans of the folk-pop duo. Paul Simon’s fingerpicking technique remains a great teacher for beginners of the craft.

Another perfect example of a heavy band whose most famous song is a vulnerable love song. This one somehow manages to maintain its epic rock quality amidst all the intimate lyrics.

This is one of several songs Jimi did that changed rock history. The raw power that he holds together with his indescribable talent made this a piece that captured the imagination of rock guitarists for generations.

A perfect integration of power chords and simple blues licks make this an ideal introduction to rock guitar. It’s also great for getting people to sing with you in a bar!

Sunshine of Your Love – Cream

Another song that is often used to introduce rock guitar to beginners, this song has a soulful punch that continues to draw Clapton fans back to his early days.

Back in Black – AC/DC

Of the tremendous library of ridiculously catchy riffs in the AC/DC canon, this one stands out near the top.

Many millennials who didn’t grow up with the early rock records find this modern electric guitar classic to be the gateway to the rest of the rock experience. Easy to play, easy to love!

This is another song that is famous partially because of its poignant lyrics that spoke to the rebellion of a generation. It’s also a perfect song to learn power chords on.

Smoke on the Water – Deep Purple

This song has both one of the easiest power chord riffs and one of the hardest guitar solos. It’s a song that fans love to sing and guitarists love to play!

This unassuming folk blues song comes to us only from field recordings, but it was incredibly influential on many British rock stars. Johnson’s raw guitar style and troubled lyrics heavily influenced the Stones, Eric Clapton, Led Zeppelin, and others.

The Times They Are A-Changin’ – Bob Dylan

This unapologetic protest song summarized the rebellion of the hippy generation and became a folk standard that is still sung and played to this day.

If I Had a Hammer – Peter Paul and Mary

Sung by many folk artists, this metaphorical song served as a rallying cry for social change and remains a campfire favorite.

One of Bob Dylan’s more personal songs, the intricate fingerpicking in this tune lends a unique quality to lyrics about love gone wrong. Have a listen and you’ll quickly find out what makes this a timeless classic.

Many audiences wonder if Arlo made up the verses on the spot. In any case, the 16 bar guitar loop is the jumping-off point for a lengthy political rant that anyone with a sense of humor can enjoy.

Based on an English poem, this song is accompanied by Paul Simon’s mysterious fingerpicking and a vocal melody that many remember as a childhood lullaby.

This song is definitely a foot-stomper! It has had activists singing the charged lyrics since its release – at the height of the environmental movement in 1970.

This song was written in New Orleans when the composer was arrested and put in a cell with a street dancer. The story has been a favorite among folk artists since its premiere on a radio show in 1968.

First recorded in 1937 by the Hot House Band, this is one of Django Reinhardt’s most famous tunes. It’s also a standard introduction to gypsy jazz.

This song was first released in 1945 and has since been played by many other thumb-picking greats, including Tommy Emmanuel.

A landmark of the classical repertoire, this piece is more reminiscent of flamenco traditions from Andalucia than the northern Spanish region of Asturias. This is probably because it was given its name by a German publisher after the composer’s death.

The masterpiece suite by a South American composer, La Catedral is a musical illustration of a grand building and a service within the building.

This piece is a popular selection from the Lute Suite in E minor, but it plays great on the guitar. It often tricks beginners because it sounds good at a slow speed, but it’s meant to be played rather quickly.

Etude in A Minor – Dionisio Aguado

Often the first piece a classical student will ever see, this simple fingerpicking etude is a great introduction to the process and pleasure of classical guitar!

This piece is the most legendary of tremolo classical guitar pieces. Using a technique that involves rapidly plucking a single string, the difficulty of this song is matched only by its profound beauty.

One of the most profound pieces in the classical repertoire, this piece was originally written for violin. It has since been transcribed for pretty much any other instrument that has a virtuoso to play it, and guitar is no exception!

This prolific Brazilian composer had many great pieces, and this one is the first in a suite called “Suite Popolaire Bresilienne.” Give it a listen and see if you can resist the urge to learn all five movements.

One of the most famous and uplifting pieces in classical repertoire, this piece falls under the fingers almost serendipitously and fills a room of any size with the warmest musical bath you can imagine.

A gem of the beginner’s classical guitar repertoire, this is a piece that teachers often introduce to their students. Give it a listen and you’ll see why it’s so unforgettable!

“Romanza” is another charming piece frequently learned by beginners. The gentle repetition of fingerpicking over the beautiful Spanish melody make this a favorite for both players and audiences.

Mournful and rich in feeling, this guitar riff is great for getting early picking techniques going. It’s also an excellent choice when you want to play something recognizable to a lot of guitar fans.

This is a favorite of music lovers and musicians alike! It includes a rhythm riff that’s not too difficult, along with some solo passages that will give any player a run for their money. Mark Knopfler’s electric fingerstyle tone opens up a whole new range of dynamics and expression on the guitar. Put down the pick and try to play it like he does!

John said he was particularly proud of this song because he felt he could apply the lyrics to any situation he found himself in. The soulful guitar work captured the interest of many electric guitarists, both aspiring and established.

This band had a knack for writing hooks, and Billy Gibbons loved to play crazy blues solos. Both are reasons why “La Grange” is one of the coolest electric guitar songs out there!

Anyone who has played in a band has probably heard more audience members scream “Freebird” than any other song in history. Most people actually request it as a joke!

While My Guitar Gently Weeps – The Beatles

This is a deep and reflective song, which refers to a guitar that has emotions of its own. See if you can make your own guitar sing or cry!

With its explosive tapping sections, “Eruption” ripped open the gates to progressive guitar playing. The song still stands as a staple for aspiring electric guitar virtuosos to master.

This pioneering piece opened up the sound of early rock to wider audiences. It’s another classic electric guitar song that younger players should be aware of.

This song can be difficult to learn at first because of its muting techniques, but it brings along the full power of the Texas Blues to anyone who masters it!

“Layla” is revered for both its powerful lyrics and its captivating virtuosic guitar hook. Clapton fans expect to hear it at every concert, whether in its original electric form or the reworked acoustic version.

There you have it, our list of the best guitar songs of all time. Don’t see your favorite guitar tune on here? Leave us a comment below with your must-listen and must-learn guitar songs!

With such a wide range of guitar playing possibilities, these songs could inspire anyone to pick up the instrument. When you’re ready to master some of these tunes on your own, there’s no better way than with live guitar lessons. Happy playing!