Looking to bring a deeper dimension to your acoustic guitar playing? These fingerpicking patterns are the perfect option to make rich and beautiful music today.

What is a Guitar Fingerpicking Pattern?

Guitar fingerpicking patterns are a right-hand method used on guitar (or other chordal stringed instruments like ukulele or banjo), where chords – instead of being strummed – are broken into arpeggios, and played note by note, generally in a repeating pattern. This retains the harmonic structure of the underlying chords, but adds a little interest, and often counter melodic elements.

Paradoxically, guitar fingerpicking patterns can be used for two opposite purposes. On the one hand, by making the accompaniment more intricate, it can serve to draw attention to your guitar playing, in contrast to straight strummed chords. On the other hand, because the notes are played one at a time, they can be played more softly than full strummed chords, and can lend a piece of music a quality of delicateness and subtlety that is often unattainable with more brash strumming patterns.

Fingerpicking can seem intimidating at first, given that it is necessarily more complex than strumming, but once mastered, it is really no more challenging as an accompaniment style. The goal is to master a handful of picking patterns, to the point where their execution becomes more or less automatic. Once this is achieved, fingerpicked accompaniment is no more difficult than strummed accompaniment but can add a lot of interest for little additional effort.

In the folk and pop tradition, the acoustic guitar fingerpicking style is different from what you’ll see with classical guitar. One of the biggest differences is that classical guitar players play with their fingernails, while steel string players stick to their fingertips or use banjo-style fingertip picks. Whereas classical players have a strict way to pluck each note, folk and pop guitarists tend to hold onto a chord and let a fingerpicking pattern rip. With a bit of practice, you’ll find that learning a new guitar picking pattern can breathe new life into your favorite chords.

If you’re just starting out with fingerpicking, begin with basic chords so that you can focus on your picking hand. Start as slowly as you need to, and don’t increase the speed until you can play it cleanly. If you find that the notes are not ringing out or that certain parts of a pattern feel sloppy, slow down the tempo and focus on the troubling bits. In time, your muscle memory will build, and these patterns will become automatic.

What Are the Best Ways to Learn Fingerpicking Patterns for Guitar?

There are a variety of fingerpicking styles out there, with many players having their own unique approach to guitar picking patterns. Some fingerpickers plant their pinky fingers on the body of the guitar, while others float their hands above the string. If you’re new to fingerpicking, it’s best to keep your hand floating and avoid the pinky-planting habit. It’s also very important to make sure that your thumb is playing the bass note of the chord, which is either the chord name or the note after the slash in the chord symbol. Check out our lesson on how to read guitar chords if you need help.

For the purpose of our examples, we’ll use the chord progression A D A E, but feel free to change these chords to your liking. The strings you play with your pattern will change depending on which chord you’re playing, so that the bass note will fall in the right place. Two of our examples have four beats per measure, and one has three beats per measure.

This first fingerpicking pattern for guitar is both simple and elegant, and it fits right in with a wide variety of musical styles. The use of the bass note on beats one and three and the two-note chord on beats two and four give this a boom-and-chick-and-boom-and-chick-and sound. I have notated it below in both standard and tablature notation.

The second pattern is a little more complex but it creates a wonderful flowing sound that is  beautiful for songs that need a soft, light touch.

This third fingerpicking pattern is simply a variation on the first pattern but now written so it works with music that is three beats per measure.

Pattern four emphasizes the “and” of beat 2, giving it a slightly off-kilter but high energy gallop. This one is especially effective if played very quickly, perhaps double-time with two repetitions per bar, or on very quick chord changes. You can hear this guitar fingerpicking pattern (or slight variations of it) in a lot of early sixties folk recordings like those of Bob Dylan, Simon and Garfunkel, or Peter, Paul, and Mary.

Pattern five is a simple but beautiful cycle that emphasizes the root on beats 1 and 3 and the 5th on beats 2 and 4, giving a straightforward pulse for a vocal melody or instrumental lead to dance over. Meanwhile, the higher notes that appear on the upbeats lend just enough ornamentation to complement and maintain interest without overpowering the forward elements of the composition.

Fingerpicking pattern six takes pattern five’s metronomic pulse and simplicity, but by reversing the order of the two treble notes gives it an ascending, almost soaring feel. Still simple and unassuming, this one feels more like a countermelody, complementing a melodic lead without overpowering it. The ascending arpeggio also gives it more forward motion than the preceding example. Even if the progression itself is a loop, putting it through this pattern will have the effect of creating the feel of a perpetual climb.

Pattern seven is another variation on pattern five. This time however, the second note is moved forward onto the same beat as the first note, and both are lengthened to become quarter notes, making this initial pitch feel very deliberate. This has the effect of emphasizing beat one of each measure, and consequently each chord change. The pattern makes the harmony much more explicit. Rather than receding into the background, it becomes a prominent element alongside the melody it accompanies.

Pattern eight moves the quarter note from beat one to beat four, giving each measure something of a stutter stop, a perfect complement to melodies with conspicuous single measure phrasing. The addition of the eighth note back onto the “and” of one, immediately following the pinch also creates a beautiful descending arpeggio, cascading back down to the root on beat three. This is the most complex of the patterns shown here, but it is worth it, and is much easier to master than it at first appears.

I hope that these three guitar fingerpicking patterns have sparked in you an interest to pursue fingerpicking further. Just like with any other musical technique, if you practice these diligently you will find that they become second nature, and soon you will be using them to accompany your favorite songs. If you hit any roadblocks along the way, a good guitar teacher can help you overcome them.

Before I end, let me throw in three more patterns as a bonus for reading to the end. If you take any of these patterns and replace the last note of the pattern with the bass note, you will find yourself with a wonderful new pattern that has a little more bass energy. Keep experimenting and you will be able to come up with many new patterns of your own. Enjoy your new fingerpicking patterns for guitar! 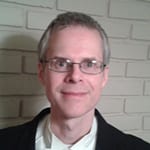 Jerry W. teaches classical guitar, composition, trombone and trumpet in Grosse Pointe, MI.  He received his Bachelor of Music in Theory and Composition from Cornerstone University and went on to receive both his Masters and PhD in Music Composition from Michigan State University.  Jerry has been making music and teaching students for over 30 years. Learn more about Jerry W.!