The use of a slide is an interesting concept on the modern steel-string guitar. The ability to use a hard object around one’s finger, such as a broken glass bottle neck, sounds bizarre to a player who has never heard of this technique before. Slide guitar is commonly heard in blues music and it involves pressing an object into the strings to create glissandos (slides) and vibrato to emulate a human voice. In this article we will discuss the origins and playing style of this unique technique, and how you can start using it in your own guitar playing.

The Origins of the Slide Guitar 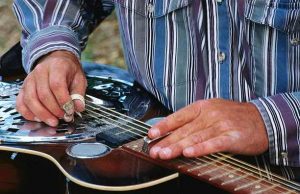 The concept of using slides in stringed instrument music is not a new concept. It is believed the use of glissandos goes back to ancient African and Polynesian tribes. In fact, I’m sure most of you have heard slide guitar in Hawaiian music! It makes sense that this articulation would be developed so early because slides really sound like a human voice singing. When you hear someone sing, their notes are connected smoothly as they go up and down in pitch; there is no pause or break in the music. Slides are imitating that same concept. Guitars do not have the ability to naturally play legato (smooth and continuous), we have to manually do it ourselves!

The slide guitar technique that we think of today was not developed until the early 1900’s in the Mississippi Delta region of America. The local musicians called this concept “Bottleneck Playing” because the first slides were made out of broken beer or milk bottles. The player would take the neck and rim of the bottle and break it to form a glass cylinder that can be placed around one’s finger.

It wasn’t until 1923 when the first recording utilizing the slide technique was released by Sylvester Weaver. Since then, many blues and country musicians decided to implement this unique sound into their music. Musicians such as Muddy Waters and Earl Hooker would influence this technique in blues music, and particularly during the development of the electric guitar. These artists would also influence bands such as The Rolling Stones to use slides as ornaments in their music.

There are two types of technique and posture a guitarist can use. The traditional method is to hold the guitar like one normally would. The guitar is held against the body and the player will place a finger of their choice through the slide cylinder. Think of this technique like a fretless instrument that can be played with one finger.

A modern alternative to this technique is to place the guitar flat in your lap or on a flat surface. The concept is the same but the change in posture requires a different feeling and position in your fretting hand.

The guitar’s tuning can also be changed to create different chords. Since you have a finger entirely impaired by a tube around it, you lose the ability to fret with that finger. If you change the tuning into various open tunings, you are able to play chords without having to fret anything.

It is more common to pluck the strings than strum in this style of playing. To create a slide effect, the player will press the slide into the strings and then slide their hand down to another fret while continuing to apply pressure. This helps to sustain the note like a human voice. To create a vibrato, pluck the strings and then gently wiggle your slide from side to side. Listen for the wavy effect, which again is very similar to how a singer’s voice works when they relax their vocal cords.

What Can I Use as a Slide?

Slides can be made out of a variety of materials. The most common slides are made out of steel, ceramic, or glass. These days it is not uncommon to see various plastics used which creates cheaper prices to consumers.

However, many artists have gotten creative with their own slides. For example, Jimi Hendrix used his cigarette lighter during the solo in his song “All Along the Watchtower”! Some early blues players would also use butterknives while they would have the guitar in their lap. Of course, each slide can have a slightly different sound and feeling towards the player. A lot of it has to do with personal preference!

How Can I Use a Slide in my Music? 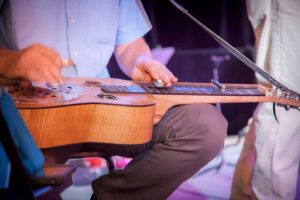 I would recommend putting the slide on your pinky finger, which allows you to use your index/middle/ring fingers to play other chords and riffs. If you put your guitar in an open E tuning, you will be able to play chords similar to bar chords without much effort. Open E tuning basically means if you strum all your open strings, they will play an E major chord. Here is the tuning…

This is the simplest way to play slide with basic chords, which is really all you need to get started with experimentation. I will not go into much more detail as this is only an introduction article. I recommend playing around with this tuning and experiment with sliding between the frets without having to hold any other fingers down on the fretboard. Become familiar to the feeling of using this new tool before diving much deeper into this world!

Playing this way will take some getting used to, so take your time! Have patience and take your baby steps! However, if you can get the basics down, you have an excellent tool in your arsenal that you can implement into your playing as you wish!