When it comes to incredible guitar players, David Gilmour of Pink Floyd takes the cake. In this article, teacher Bernard M. shows you how to play the guitar just like the legend himself…

Many musicians strive to sound like their heroes. They want to get that special something that makes those legends stand out from the crowd.

One of the best ways you can do this is to learn their parts — beat for beat, note for note. While this can be difficult and time consuming, it’s one of the most rewarding learning strategies for musicians of all levels.

One of my favorite guitar players is David Gilmour from the band Pink Floyd. He brings a certain sense of taste and melody to everything he plays.

In order to unlock the secrets of Gilmour’s playing style, we’ll be looking at the guitar solo from the song “Time.” This famous solo is a great example of how Gilmour tells a story with his guitar.

Before we dive in….

This Pink Floyd guitar lesson contains a detailed breakdown of the solo, four bars at a time, with tabs for each section and an analysis of what Gilmour is doing and why it’s so effective. Below is a recording of the song so you can follow along.

Above each line of tabs is a time marker, telling when in the song each section occurs. I also included the chords behind the solo above each bar. This will become important in our analysis when looking at Gilmour’s note choice.

The minor pentatonic scales find heavy use in this solo, especially in the first and second positions (shown below).

As the song is in the key of F#m, the first position will begin on the 2nd fret and the second position on the 5th fret, each repeating an octave above at the 14th and 17th frets respectively.

At the end, I’ll give you my five tips on how to play a guitar solo like David Gilmour, highlighting the key points talked about in our analysis of the solo.

The iconic sustained notes and bends in the first three bars show off Gilmour’s melodic sensibilities. Clearly, he’s in no rush and is leaving himself room to stretch out his chops later in the solo. This slow introduction uses the first position minor pentatonic scale, just tracing the chords at the low end of the fret board. In the fourth bar, Gilmour slides into the second position of the scale for a more aggressive Albert King style blues lick, hinting at what is to come later. For some extra kick, try giving the 5th fret e-string note a quarter-step bend!

On his second go around the chord progression, Gilmour uses repetition and variation, echoing the beginning of his solo before moving into new territory. This creates a call and response effect between the repeated melody and the varying blues licks.

In the second bar, he responds with the bluesy major sixth interval (9th fret G-string to 9th fret e-string) to emphasize the notes that make up the A chord.

You may have noticed that Gilmour frets or bends to some notes outside of our pentatonic scale. These notes from the minor scale are peppered in to add a sweeter flavor to the melodies.

Notice how half-step bends are used to move lyrically between these minor scale notes. Gilmour ends this section with a long sustained bend to an F#, creating a sense resolution, for now…

If the first two sections acted as an introduction, these next two are most certainly the climax. Gilmour slides into an F#m arpeggio in the first position pentatonic scale an octave above where the solo began.

To effectively execute this lick, use your second finger on the 16th fret, your first finger on 14th (fretting the G-string with the fingertip then pivoting to the B-string just above your knuckle) and your third finger to bend the B-string at the 17th fret, leaving your pinky free to hit the e-string.

The second bar features a step-and-a-half bend between two full-step bends. This classic blues technique requires strong fingers and good pitch recognition, but is well worth the practice it takes to master.

Finally, Gilmour carries us over the bar into the next section with a powerful lick descending towards the root note, hitting on beats three, four, and the one of the next bar. This is a very powerful phrasing move, using the melody to weave different bars together.

We land on an F#, once again emphasizing the root of our first chord. This is followed by a pre-bend release, adding some character before descending into a pull-off run. As the A chord comes around, we bend up on the 16th fret to hit a familiar C#.

Notice a pattern? Gilmour’s careful note choice and use of repetition and variation keeps things familiar but fresh.

The next lick carries us over the bar with the solo’s highest note, an exciting bend on the e-string at 19th fret. This phrase is reminiscent of the bend at the 17th fret at the end of the last section (again, repetition and variation at work).

To create a sense of closure as the solo nears a change in the chord progression and overall tone, Gilmour runs down an E major arpeggio, resolving over the bar to, you guessed it, an F# root.

This section marks a dramatic shift from a minor to major mood, bringing the solo to its conclusion. Gilmour begins with a dreamy triplet run over a Dmaj7 arpeggio, using slides to create a floating, liquid feel that perfectly suits the new mood.

Notice the half-step interval from the 9th to 10th fret, marking the brief return of the sweet lyrical tone found in the second section.

Gilmour leaves a lot of space between his flowing slides, giving each carefully-chosen note time to express its particular character over its chordal backdrop.

My personal favorite is the G# note on the 9th fret of the B-string at the beginning of the third bar. Over the Dmaj7 chord, it expresses the heavenly lydian mode sound of the #4 chord tone. (Music theory aside, the take away is this: choose your notes based on what sounds best over the passing chords!)

In the final four bars, Gilmour brings the solo to a close with two distinct phrases. The first, which begins with the unison bend in the previous bar, calls back to the 4th fret bends at the very beginning of the solo (and the 16th fret bends an octave above during the climax) for some final repetition and variation.

Here, he uses a step-and-a-half bend between full-step bends, a pre-bend release, and a long sustained bend to get the most out of this expressive phrase.

Gilmour ends by playing around an E major arpeggio, bringing a final sense of closure and resolution with the sustained E note on the 2nd fret and the open low E-string an octave below.

What did we learn? My five tips for playing like David Gilmour! Ok, so we just covered A LOT of ground. Let’s take what we learned from analyzing the solo and summarize it into some key points.

1. Tell a story:
Your solo should have a clear beginning, middle, and end. In your introduction, make an opening statement that sets the tone, but still leaves you with somewhere to go. When you reach the climax, pull out all the stops and let loose those licks you were saving. Whether it’s one note or eight bars, make sure your conclusion leaves your listener with a feeling of closure.

2. Bend like a master:
Remember, your good ol’ fashioned full step bend isn’t the only way to go. Try your hand at half-step bends, pre-bend releases, and even step-and-a-half bends. These are great ways of getting the more expression out of your playing (just make sure the notes you’re bending to are in your scale).

3. Repetition is your friend:
Soloing is not just playing a string of notes from a scale (trust me; I’ve made that mistake plenty of times). Repetition and variation allows you to set up familiar themes, transform these themes, play into or defy the listener’s expectations, and make patterns such as call and response.

4. Choose notes wisely:
Use the chords! They’re your guidelines, telling you what notes you should play. While this can be daunting at times, take your time and trust your ears, as they’ll often lead you to the right notes. If you can find the root notes to chords, or better yet, the full arpeggios, you are on the right track to playing with the chord changes. (Want more on this? Look up chord scales!)

5. Be clever with rhythm:
Again, soloing is not just playing a string of notes. Choosing how you use rhythm can make or break a solo. Leave yourself plenty of space with long sustained notes and bends. This will provide contrast for fast and busy licks, making them more effective. For even greater effect, try playing over the bar, or using triplets. For more, check out my article on using space and phrasing during solos.

I hope you’ve enjoyed our journey through the style of David Gilmour and his solo from “Time.” I hope you use these ideas to help spice up your playing, and this strategy of analysis to help you unlock the secrets of your favorite players.

Are there any great guitar solos you’d like to learn? Share your requests in the comments below! 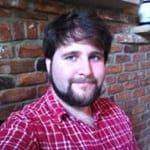 Post Author: Bernard M.
Bernard M. is a guitar and songwriting instructor in Philadelphia, PA. He graduated from The College of New Jersey with a bachelors degree in English. He teaches lessons online and will travel to his students. Learn more about Bernard here!