You don’t have to be a virtuoso guitarist to touch people’s hearts with your music! Guitar teacher Samuel B. shares a few of his favorite great-but-not-that-great famous guitar players…

Towards the end of Johnny Cash’s autobiography, you’ll find the following paragraph:

As to my musical future, my prospects look good. I can whack on a guitar as incompetently as I could a year ago, probably more so. I can sing just as well, or as badly, as I ever could. And I’ve got more songs trying to go through me than ever; I’ve written three in the last three weeks.

Despite his technical limitations, Johnny Cash remains an iconic musician, and likely will for decades to come. It is a mistake, I think, to automatically link great music with technical perfection.

Vaughan, Hendrix, and Clapton aside, the majority of my guitar heroes were not superb musicians. Their influence is based on innovation and expression to a much greater extent than it is on fluid musicianship.

In this post, we’ll tell you all about some of the world’s most famous guitar players – as well as 10 who were recognized for their greatness but weren’t actually all that great at the guitar!

Who is the Most Famous Guitar Player? 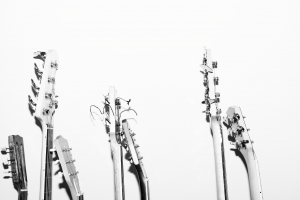 Among the many famous great guitar players of all time, some of the most notable names include:

Of course, this list is not exhaustive, but it should give you a good idea of some of the top names if you’re looking for inspiration! And remember, before you can become one of the greats, you’ve got to put in the time to practice. Here’s a quick video explaining the basics of guitar chords for beginners: 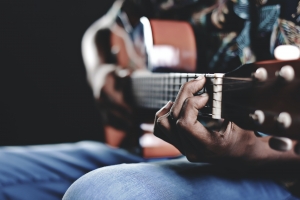 Say what you want, but being a famous guitarist isn’t always about technical skill and the ability to lay out some serious riffs.

In fact, in many cases, becoming a famous guitar player has to do with so much more, including your ability as a lyricist or singer, your stage presence and persona, and much, much more. Take comfort in that fact if you know you want to become one the world’s most famous guitarists – but aren’t sure you have the technical chops on the guitar to measure up.

Cash is just one example. Here are nine others:

Guitar-wise, the best I’ve heard of Dylan are the tracks on his first album for Columbia: Bob Dylan (1962). With two exceptions, its 14 tracks are traditional songs or material by other artists which Dylan adapted to a fast-paced “high and lonesome” style involving intense strumming and (in some cases) intricate fingerpicking.

Despite these energetic musical highlights, none of his other albums boast remarkable guitar moments. While Dylan has proven himself an exceptional and highly influential lyricist, his musicianship is considered average at best.

Just listen to the opening chords of “Free Fallin’.” They are about as simple as they come. The song itself has no chorus or bridge.

Very few figures in rock create anthems as memorable as Petty’s. They’re not based on intricacy – just gut and tone. Petty’s music is raw and exuberant. Any listener can relate to it.

A former doo-wop and gospel singer, Havens maintained a career of playing an alternate tuning with his thumb over the neck. The sound of his strumming and his voice was unmistakable – a powerful yet warm and soothing balm.

At times, he described his guitar as more of a tool than an instrument. Havens’ contribution to music history was not based so much on musical excellence as it was on his ability to use his artistic gifts and his grandfatherly wisdom to inspire the best in others.

Footage from the 1988 documentary Rattle and Hum includes a collaboration between U2 and King. During the rehearsal, King twice indicates how poorly he plays chords.

King’s calling card was his vibrato which (like Havens’ thumb chords) was his alone. Who can forget his childlike face after telling Lucille to talk to him and closing his eyes?

Even on Nirvana’s intimate MTV unplugged album, no guitar highlights are apparent. In most respects, Cobain was an innovative songwriter and bandleader.

He should be credited as having been one of the key players that brought alternative music to the mainstream. Few bands had a sound as full-bodied and expressive as Nirvana’s.

She’s even taken to having her electric “VG-8” guitar tuned offstage as each song on her set list is in a different tuning. Still, she is not a technically brilliant guitarist.

I once saw Evans provide a televised tour of his onstage lineup of pedals and related electronic tools during U2’s Zoo TV tour in the early 90s. Among the guitarists who’ve honed a recognizable niche in alternative music, he’s a chief innovator.

The haunting opening lines of “With Or Without You” should be considered a revolutionary piece of musical history in of itself – a single sustained note over multiple measure of the bass line (not an easy feat actually). The strumming later in the song comes close to imitating the sound of a train.

As with Cobain, credit is due as praise for the sound itself – not for how fast and flashy he has played it.

When it comes to attitude and energy (not to mention lyrical brilliance and enough stage presence to convert an entire arena of avid concertgoers into instant fans), nobody compares to Amy and Emily (The Indigo Girls). They’ve penned what I consider to be some of the most memorable songs of the last two (nearly three) decades (ie “Closer To Fine”, “Joking”, “Bury My Heart At Wounded Knee”, “Least Complicated”).

As is true with many of the others mentioned, unforgettable guitar licks are few (if any) on their albums and in their live shows. They’ve given us a beautiful tapestry of poetry and emotion that’s easy for most of us to appreciate and understand.

The 100 Most Famous Guitar Players Ever 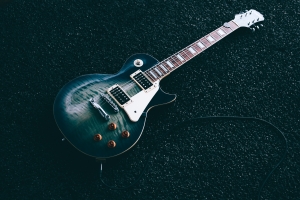 Now that you know some of the most influential guitarists (who weren’t technically all that great), you might be wondering whether you’ve got what it takes to join the ranks of the most famous guitar players yourself.

Here’s the ultimate list of famous great guitarists so you can decide whether your guitar playing style matches up with any of the greats!

If you play the bass guitar, that doesn’t mean that you can’t be counted among the greats. Here are some of the most famous bass guitar players in the world:

The steel guitar is another instrument that, like the bass guitar, is often ignored when it comes to reciting the legends. Here are some famous steel guitar players:

You’ll notice that Les Paul himself is listed on the above list of the best guitar players. However, he’s even better known for his creation of the guitar that made many other rockers incredibly rich – the Les Paul guitar!

Here are some famous Les Paul guitar players to know about:

While we’re on the subject of brands, let’s talk a little bit about these Yamaha guitarists. Yamahas tend to have a pretty solid fan base, offering a diverse array of guitars. Here are some top Yamaha guitarists:

These ladies really know how to rock! The best female guitarists include:

These famous black guitar players are some of the best in the world.

Who Are the Most Underrated Guitarists? 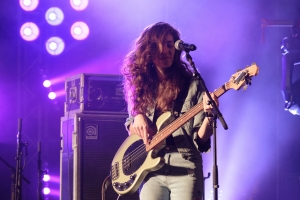 There are plenty of famous guitar players who are recognized for the influence they’ve had on the world of music – yet there are even more who are totally underrated. These guitar players are some of the best, yet haven’t deserved nearly enough of the credit they deserve.

And despite all the bashing he gets, we have to admit, Justin Bieber is a pretty great guitarist, too! No judgment, right?

As you can see, the list of famous guitar players goes on and on. There are plenty of talented musicians from whom you can draw inspiration as you broaden your horizons and practice your skills. Rock on!

What did you think of this list? Are there any famous guitar players you’d like to add? Let us know in the comments below!

Samuel B. teaches beginner guitar lessons in Austin, TX. He teaches lessons face-to-face without sheet music, which is his adaptation of Japanese instruction (involving a call-and-response method). Learn more about Samuel here!