Every guitarist wants great tone, but what if you’re not entirely sure what that means? Guitar teacher Noel S. breaks down the basics of guitar tone and shares what every electric guitarist should know about their gear…

We’ve all heard great classic guitar tones from our favorite musicians and felt motivated to hit the practice room or visit the music store, determined to achieve the same results. Finding a way to achieve those results, we’re faced with the infinite choices of strings, pickups, amps, tone settings, and effects, which leaves us looking for additional knowledge of how mastering guitar tone all works.

It’s easy enough to get creative with imagery-based tone descriptions like “warm,” “bright,” “mellow,” “harsh,” “clean,” “dirty” and so on, but many guitarists feel frustrated by the subjective nature of these types of descriptions. For students who want clear pathways to the guitar tones they love, we require definite terms to communicate those elements which produce guitar tone.

So, to enhance your knowledge of guitar tone, check out the following terms to know, gear to experiment with, and musicians to listen to as you embark on your path to becoming the guitarist you’ve always aspired to be.

Pitch: Any note you pluck on the guitar is heard as a “pitch,” defined as the fundamental cycle-per-second sound vibration produced (typically measured in units called “Hertz” or “Hz”). Say you played an A note on the 5th string open. The whole string vibrates at 110 cycles per second to produce the fundamental note – its lowest vibration speed for the note that you’re playing. That is the pitch of A that you hear.

Overtone: Your A string is also vibrating in halves, creating a sound that’s called an “overtone.” This doubling of vibration speed produces the first overtone, heard at the same time one octave higher.

Your A string vibrates in thirds as well – three equal pieces, producing the second overtone. Even higher divisions of string vibration occur at the same time you pluck, and as the number of divisions goes higher, the less audible the sound of that overtone is.

As a side note, understanding vibration speed explains why the first guitar string is called “high E,” even though it’s located lower (physically speaking) than the other strings. It is also why moving “up” the guitar neck is a sideways and downward movement.

Timbre/Tone: Play that A string again, this time stop only that string’s vibration. You will discover that the D string is also vibrating a little bit, because of the overtones contained in that fundamental A noted you plucked.  You’ll hear it as “A1,” or the same note sounded as if the D string were plucked at the 19th fret.

Bass: A fundamental note contains energy that moves with a specific frequency, categorized into ranges, or bands, known as “bass,” “middle” and “treble.” Frequencies ranging from 20 Hz to 300 Hz receive their regulation from your amplifier’s bass control knob.

Middle: The best frequency range for human hearing is the midrange: 300 to 4000 Hz. Most human vocal sounds are produced in this range, which explains why our hearing tunes in to sounds in this band of frequencies. This fact reveals one cool way you can help create sonic space for your band’s singer, by omitting notes in your guitar chords that would crowd his or her midrange-frequency space. Note that most of our guitar’s fundamental range falls within the midrange, and we can set that control higher than our bass and treble.

Treble: Finally, treble encompasses sounds from 4000 Hz to 20,000 Hz. Remember our definition of tone? Sound vibrations known as overtones are generated by a string moving in halves, thirds and continuously smaller divisions, with audibility diminishing and disappearing after the seventh division.

So, high-string riffs from above the 12th fret can have a consistent and dynamic level, great tone and well-balanced audibility, provided you keep the treble or presence knob on your amp from venturing far beyond the midpoint. The pain from hearing too much treble will let you know when to back off.

In order for you to gain confident knowledge of the guitar sound you want, it’s important to know the following descriptions of tone controls, amplifiers, pickups and effects pedals. As you experiment with these sounds, be sure to listen to guitarists who have used these effects in their music.

An amplifier’s true tone needs to be measured at power inputs of at least 30% volume, and then measured again at 50% and beyond. The tone descriptions below follow those standards of measurement, and differences in tone between tube amps and solid state amps emerge only within those categories.

Tube Amps: Transformers on a tube amplifier provide a natural, high-frequency gate that keeps a guitarist’s high-note overtones in check, which is a desirable quality. When the amp warms up, and the transformer reaches a point of core saturation, tube amplifiers deliver a level of compression to the tone, evening out the dynamics of the guitar sound during performance. This reduces the chance of a note sounding like it was plucked too hard, too softly, or with an abrupt attack. It provides a more sustained dynamic level of loudness, another desirable quality for guitar tone.

Fourth overtone harmonics are produced by tube amps, and the interval produced by this tone delivers more sustain to the fundamental note. For examples of tube amp sounds, listen to Deep Purple’s “Smoke on the Water” intro. You can also check out Stevie Ray Vaughan recordings, such as “Crossfire,” “Voodoo Child,” and “Pride and Joy.” Want to hear more? Try Steve Vai or Angus Young’s recordings.

Solid State Amps: The sharper sound wave generated by these amps provides for a more sudden “attack” portion of your tone. The overtone primarily produced by these amps, the 3rd harmonic, provides for a quicker decay of the sound. These characteristics lend themselves very well to a precise attack of each note – an instant response. Listen to B.B. King’s “King of the Blues” solo for an example of a solid state amp sound. Or, check out guitar recordings from Andy Summers of The Police, such as “Every Breath You Take.”

Stack Amps: Since the guitar tone effects from amplifiers present their most desirable qualities with the volume turned up to a certain amount, guitarists require these amps only for performances in very large venues. Smaller amplifiers provide better tone conditions for recording and practicing, and restaurant, bar or club performances.

My experience performing up and down the New York City andNew Jersey coastline started with a solid state Polytone Amplifier. I needed more volume for every venue where the band performed, so I got rid of it and bought a used Roland Jazz Chorus 120, which sounded great at low and high volumes. I’ve performed with it for decades and never spent another cent maintaining the Roland.

Guitar pickups effect tone to the extent that some effects pedals now feature settings with a design for each type. Every pickup takes physical variations in acoustic sound energy and converts them to electric sound energy. The materials used and the way that they’re used makes the difference in tone.

A  pickup affects guitar tone in many ways, such as the strength of its magnetic field, size of its magnetic field, diameter of the wire wrapped around the magnet, its location on the guitar body, and how the guitarist is playing. When choosing a pickup, keep in mind the range of frequencies you’d like to emphasize in your tone, the abruptness or subtlety you’d prefer in a sound’s attack, and the dynamic curve in your sound’s sustain and decay. Discover these points by experimenting with this information and listening to examples of guitarists playing different types of pickups.

Piezo Pickups: Piezo pickups use quartz crystals to receive and transmit sound energy. They’re mounted in the saddle bridge of guitars that use them. The very accurate dynamic response to a guitarist’s string displacement (how hard you pluck) surprises people upon first trying Piezo pickups. That’s why everyone who uses them also uses a compression effect to even out the dynamics.

On a related note, string displacement affects tone, too! A downward displacement of 45 degrees toward the soundboard or body is the goal I always recommend to students. Compare that tone to a sideways pluck and also an upward pluck (away from the soundboard or body). In each case, we take note of how all of these parameters affect the presentation of our overtones, our note’s attack, sustain and decay. These are the important factors in determining the guitar tone we want.

Humbucker Pickups: Humbucker pickups are designed to provided the answer for the single coil’s tendency to pick up surrounding electromagnetic fields and accompany the guitar’s tone with an annoying “hum” sound. Two magnets were used in Humbuckers to cancel out extraneous electromagnetic hum noise.

Since a larger field of magnetism captures a greater range of middle and low-frequency overtones, Humbucker’s put out more of the lower midrange of tonal space. This sound is very desirable, especially for riffs or chords using the lower strings. Listen to Jimmy Page and Led Zeppelin perform “Rock and Roll”.

Effects Pedals and Your Guitar Tone

The order of adding effects and using effects pedals generates from common sense and practical experience. Place the wah pedal before your compressor to obtain a more abrupt attack to your sound, or after the compressor to provide a more subtle attack and a lower and middle-frequency boost.

To even out your dynamics before adding effects, you can place the compressor at the beginning of the effects chain. A distortion pedal adds overtones, so place it before the equalizer so that you can control those added tones.

Phasers and flangers add a slightly delayed or out-of-phase sine wave to your original sound, which is something you wouldn’t want to add a lot of overtones from your distortion pedal to. Put these types of effects after the distortion and EQ.

Look at the descriptions of your reverb/delay sounds. You will see words like “large hall,” “small hall,” “dome,” “tunnel,” and “studio.” What would my tone sound like if I were playing guitar in one of these locations? That’s why we want our total tone package in place before adding these effects.

Using the science, recorded examples and your own experimentation, keep on improving your guitar tone. We can achieve a lot more than we ever thought possible with great improvements in sound quality!

Looking for more tips on improving your guitar tone? Check out this awesome guide from Guitar Chalk. 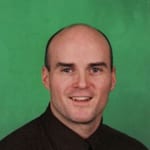 Noel S. teaches guitar, piano, and music theory lessons in Beachwood, OH. He holds a Masters degree in music from Dusquesne University and he has been teaching since 2001. Learn more about Noel.