Are you un chef (a cook) on par with Disney’s “Ratatouille”? You’d better be if you want to compete with the best of French cuisine! If not, go sample a little cuisine as un gourmand (one who enjoys eating a lot) or un gourmet (one who enjoys fine delicacies) – or perhaps as both! Here are some French vocabulary terms you should know on your path to becoming the next greatest French food connoisseur!

As the chef of le restaurant (the restaurant) begins to cook and your serveur (waiter) has come to greet you, be sure you have your proper tableware: une fourchette (a fork), un couteau (a knife), une cuillère (a spoon), and un verre (a glass) – perhaps with de l’eau (some water). You should also have une serviette (a napkin) beneath or beside your tableware.

The serveur (also known as un garcon, literally meaning “a boy”) will probably bring you une assiette (a plate) when they brings you your répas (meal). Before he does, watch out for du pain (some bread) to arrive on the table. It may be in the form of une baguette or some other roll or loaf. The word baguette literally means “stick” or “wand,” so it is quite appropriate to the shape of the loaf.

Whatever it is, it should be freshly made de la farine (of flour), de l’eau (of water), and de la levure (of yeast or leavening). If you’re at a French restaurant in San Francisco, you might ask for du pain au levain (sourdough bread). 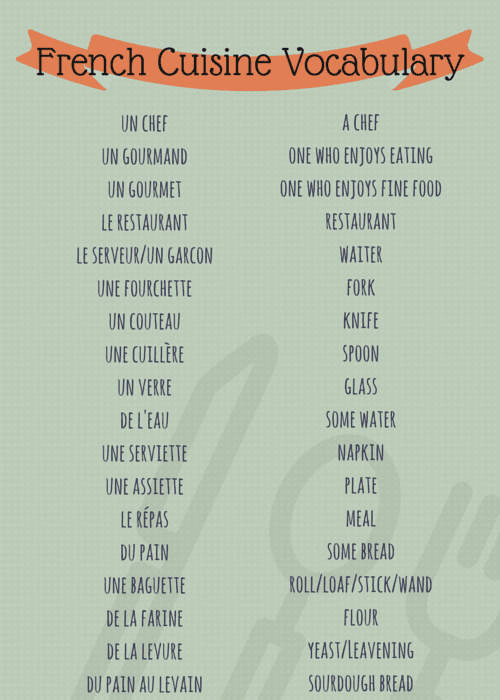 With your bread, your serveur may offer you du vin (some wine) made with raisins (grapes), finely and carefully cultivated in one of France’s many regions. Each has its own distinctive flair. Un vin blanc (a white wine) usually goes well with des pâtes (pastas), aux sauces blancs (with white sauces), du poisson (fish), or du poulet (chicken), whereas un vin rouge (a red wine) usually pairs better with du boeuf (beef), du rosbif (roast beef), or des pâtes aux sauces rouges (with red sauces). Un vin rose (a pink wine) would fall somewhere in between. 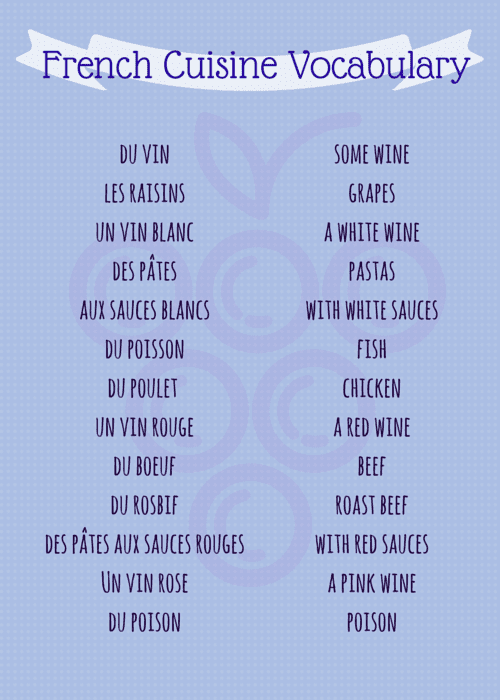 Along with la viande (the meat) that you select, your plat principal (main dish) may also contain des pommes de terre (potatoes, literally “apples of earth”) or des légumes (vegetables) such as les haricots verts (green beans), des tomates (tomatoes), or des carottes (carrots). Les frites (French fries) have also become a popular side. Before your plat principal, you may also have de la soupe (soup) or une salade (a salade) as un apératif (an appetizer). 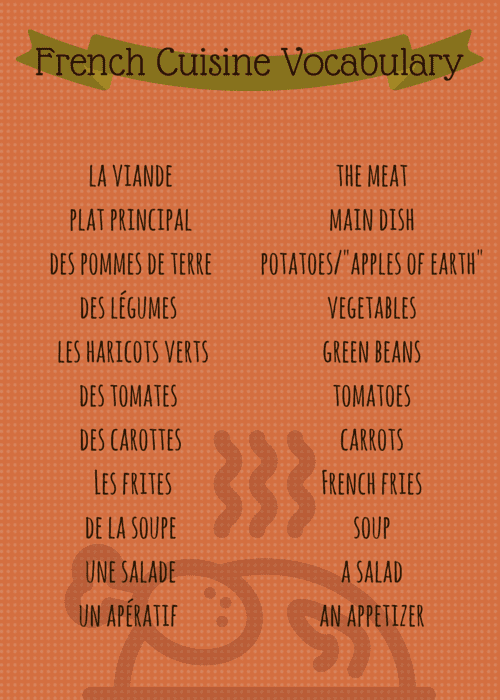 Les fromages français (French cheeses), like les vins français (French wines), also come in numerous varieties from France’s regional provinces. Munster cheese (sounding similar to but distinct from the American Muenster cheese) comes from Alsace on the eastern border with Germany. Roquefort, with its strong flavor and visible green sprinkled throughout, comes from the Midi-Pyrenees near the border of Spain. Camembert, a soft, creamy cheese, hails from the northern province of Normandie, right along the northern coast of the English channel. Brie, also a relatively soft cheese, is at home in the Parisian province of Île-de-France.

Be patient with les fromages, though! Unlike le vin, it will most likely be served at the end of the meal, along with le dessert (dessert), possibly including du fruit (fruit). 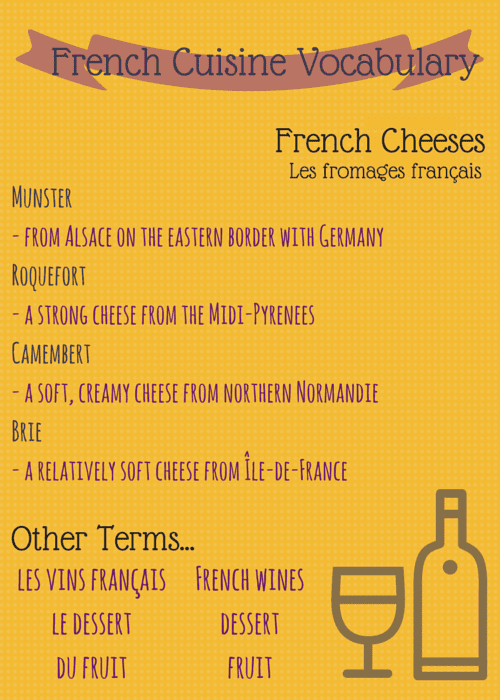 If you are wandering the streets of Paris, especially near Montparnasse or Luxembourg Gardens, you may pass une crêperie (a crepe cafe) – also a great place for a quick meal or snack. These delicious-smelling shops, often with a front window or stand from which you may order, offer both des crêpes salées (savory crepes) and des crêpes sucrées (sweet dessert crepes).

Les crêpes salées might include un oeuf (an egg), du jambon (ham), du fromage, du beurre (butter), du champignon (mushroom), or whatever other savory items the stand might have on hand. That list includes a lot of meat and dairy, but a vegetarian crêpe salée is also possible! Vegan is a little more difficult, since typical crêpe batter contains de l’oeuf, du beurre, and du lait (milk).

Une crêpe sucrée is often filled with some combination of du sucre (sugar), du citron (lemon), du chocolat (chocolate), du fruit, and sometimes du Nutella. If you’ve never had Nutella, check it out at the store, especially if you like le chocolat, les nois (nuts), and sweet things. Though technically first made in Italy, it has become pretty popular internationally! 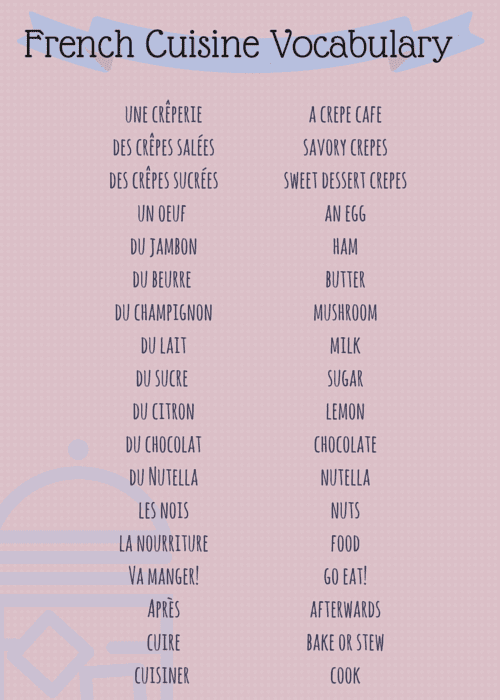 Hungry enough with all this talk of la nourriture (food)? Va manger! (Go eat!) Après (afterwards), go learn to cuire (bake or stew) or cuisiner (to cook) the delicious platters you just enjoyed!

Get a leg up on your French by studying with a private tutor. Tutors are available to work with you online via Skype or in-person, depending on locations and availability. Search for your French tutor now!

Carol Beth L. teaches French lessons in San Francisco, CA. She has her Masters in French language education from the Sorbonne University in Paris and has been teaching since 2009. Learn more about Carol Beth here!