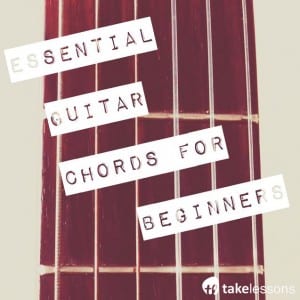 For many beginners, learning easy guitar chords is a great way to get comfortable with your instrument. Chords are also the building blocks you’ll need to learn to play many of your favorite songs. Grab your guitar and dive into this essential guide to the basic guitar chords you need to know.

A chord is a group of notes that create a harmony when they are played together. There are two ways you can play a note on the guitar. You can produce a note by holding the guitar string down at a specific fret on the guitar’s fingerboard, or you can play the string open, without holding down any frets. 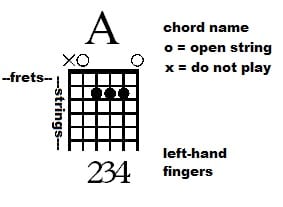 Don’t worry if you don’t yet know how to read guitar tabs or sheet music. Guitar chords are often written out in simple charts like the one on the left. The chart is a graphic representation of the fingerboard of your guitar.

The horizontal line at the top of the guitar chord chart is the nut of your guitar, the piece where the head meets the fingerboard. Each horizontal line below it represents another fret.

The six vertical lines each represent a string, from left to right EADGBE. If you are holding your guitar like you are ready to play, the string closest to the top should be the thickest string, the low E. As you strum downward, you will hit the A, D, G, B, and last the high E.

On this diagram, the three black dots indicate that you will need to press down three strings – the D, G, and B strings – on the second fret. The numbers at the bottom of the chart tell you which fingers on your left hand you should use to hold down the strings. Your left hand fingers are numbered one through four, starting with your index finger.

For the first chord progression you will learn, you’ll want to start by learning how to play a C chord on guitar. Put your index finger on your left hand on the first fret of the B string. Place your middle finger on the second fret of the D string, and your ring finger on the third fret of the A string. Press firmly with the tips of your fingers and be sure not to accidentally mute any other strings. Strum slowly from the A string down and listen to the chord ring.

C-G-D is a very common chord progression in pop, rock, country, and folk music. Practice strumming each chord for four counts and then changing to the next chord. Repeat.

Try to make the transition from one chord to another smooth and seamless with the rhythm of your strums. Play as slowly as you need to in order to keep an even tempo. As you get more comfortable playing these three chords, you can start to play faster.

Another common chord progression is A-Em-D. See if you can learn to play the E minor chord by looking at the chart above. Try strumming each chord for three counts before changing to the next chord. Repeat this until you are able to change chords smoothly and with ease.

As you begin to feel more confident playing each of these chords, try playing your own combinations to practice changing from one chord to another. Be creative and make your own chord progressions. Make sure that you feel comfortable switching from each of the above chords to any of the others.

How to Play Power Chords on Guitar

A power chord is a movable chord shape that can be played on different frets up and down the fingerboard. Essentially, you only need to learn one shape and you can play just about any chord. Power chords are commonly used in rock, metal, and punk music.

You can move this shape all the way up the fingerboard. You can also move each finger up one string, while maintaining the same shape to play power chords that are rooted on the A string. Get familiar with the notes on the E and A strings of your guitar so you know what chord you are playing.

Now that you know some basic easy chords, it’s time to start learning songs! Try our guide to playing 5 songs using the chords you’ve just learned, featuring tunes like “Brown Eyed Girl” and “Royals”. If there’s another song you’d like to learn, there are lots of free websites where you can find the chords and lyrics to your favorite songs. One of our favorites is Ultimate Guitar.

If you’re ready to start making serious progress on the guitar, taking private lessons is the best way to take the plunge! A qualified guitar teacher can give you the personal attention you need to truly master the techniques you want to learn. TakeLessons teachers are available for local or online private, one on one lessons. Find your perfect teacher today!

You might also like…
–How to Tune a Guitar – Easy Tricks and Pro Tips
–Learn Guitar Now: How to Read Tabs
–Easy Guitar Tabs to Play Now