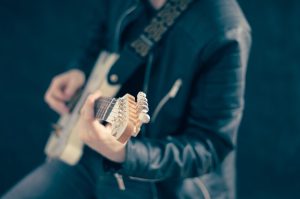 When you’re first learning to play guitar, it’s important to develop the dexterity and coordination of your left and the right hands. To be able to use both hands is our initial goal and this takes a good amount of practice. If you’re going to spend hours practicing, you might as well use that time to learn something that you like to play. After all, it is much more fun to practice songs in a genre that you like, rather than practicing a piece in a style that you don’t like. So, if you’re a rock fan I think learning rock songs on guitar might be a very good opportunity to practice.

There are many great rock guitar songs to get started with, and no matter what your level is, there is always a song that you can use to learn how to play. Depending on your level, you can start by playing riffs with a single string, or you can play more complex patterns.

In this blog post I made a list of three songs that you can play and get practicing. Moreover, you can play these rock songs either on acoustic guitar or on electric. So, let’s get started:

“Smoke on the Water” by Deep Purple

This song is one of rock classics for guitar. It’s also an easy and common tune to play, because you can play the famous riff on a single string. For this reason it is one of the most common songs for learning how to play guitar no matter what age or level you belong to. All you have to do is to go to the sixty string and play the famous riff at the beginner level. With a quick Google search, you can find the notes and/or the sheet music for the full song to play more advanced versions of this song.

This song is for slightly more advanced students who already mastered the single string version of “Smoke on the Water”. “Seven Nation Army” is a song by the White Stripes, which became famous with its main riff – which also happens to be a good one to play on a single string. The riff is slightly longer than Smoke on the Water, and it’s also a great way to familiarize yourself further with the fret board as it jumps around the various frets.

This one is going to be far more advanced than the first two songs, as this one is played with what we call ‘guitar chords’. Chords are when two or more notes more are played at the same time and they are pretty frequent in rock music. If you’d like to find out more about chords, feel free to read this article.

“Knockin’ on Heaven’s Door” is a song originally by Bob Dylan and later covered by Guns N’ Roses. It’s a really convenient song to play, as it consists of three chords: G Major, D major and C major. If you are feeling like you have a good grasp of single string riffs and want to play more, it would be a good idea to look up these chord shapes and learn how to play them on guitar. You can play this song also with an acoustic guitar or an electric guitar, and it’s a really fun song to play either way as it has that rock ‘n’ roll feeling. You can not only have a good time while playing the song, but you can also learn these chords and add to your chord vocabulary.

If you like rock music, playing guitar with rock songs is a really fun way to practice and to learn. As a beginning guitar player, you need to practice a lot to increase your left-hand and right hand dexterity. So, as you familiarize yourself with the guitar instrument, it might be a good idea to add some songs that you like in your practice repertoire.

If this music inspires you, you should not only learn as much as possible about rock guitar songs in your lessons, but also in your free time. Learning guitar takes lots of time and effort, so if you’re going to put that effort into it you might as well do it while you play your favorite music! So, I hope these three songs adjusted for three different levels will help you and hope you have a great fun playing them!