Cajun French, also known as Louisiana French, is the term used to describe the variety of French spoken in South Louisiana. It originates in the language spoken by the French and Acadian people who settled in Louisiana 400 years ago.

To answer those questions we will have to look back in time and understand how the French speakers first arrived in North America :

A little bit of history: 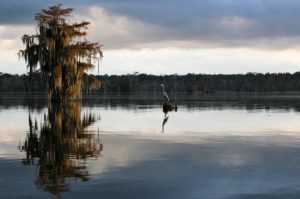 1534: Exploration of the Gulf of Saint Lawrence (outlet of the North American Great Lakes) by Jacques Cartier, a French navigator and writer born in Saint Malo, France, in 1491.

1712: New France consists of 5 colonies: Canada, divided into the districts of Québec, Trois-Rivière and Montréal; Hudson’s Bay; Acadie in the northeast; Plaisance on the island of Newfoundland and Louisiana.

The geographical position of New France led to tensions between France and Great Britain: it prevents the westward expansion of the thirteen British colonies in North America, as well as the connection between these colonies and Rupert’s Land.

1754: France and Great Britain enter into the Seven Years war, a global conflict that spanned the five continents, also known as the France and Indian War.

1763: France is defeated and forced to give up their rights to their colonies in North America as a term of the Treaty of Paris to Great Britain and Spain. Spain acquired Louisiana.

1755 to 1764: During this period called the great deportation, approximately 10,000 Acadians were deported, shipped to several points around the Atlantic. A Large number of them landed in the English colonies, France and the Caribbean.

Acadians exiled in the middle and southern colonies gravitated towards the former French colony of Louisiana, whose new Spanish rulers were sympathetic to Roman Catholics.

The Acadians remained to develop the culture now known as “Cajun.”

1800: France acquired Louisiana from Spain and sold It to the United States three years later ending France’s presence in Louisiana

And this is why we can find Acadians and Cajun French in Louisiana!

The foundation of Cajun French is the French spoken from the 1600s. Since then, there was very little formal learning of French available to Cajun. Meanwhile, The establishment of l’Académie Française in France in 1634 standardized the French language and made it the language of reference for all regions and dialects in the country. Even now, l’Academie Française is in charge of managing the evolution of the language, creating new words for newer concepts making sure to preserve the integrity of the language.

Without a governing body to analyze and direct changes of approved usages, people are inclined to use words as they know them and to change them as life evolves. Cajun French kept evolving on its own. Acadiens and Cajuns adapted existing words to mean newer things.

Over the years, Cajun French (or Louisiana French) has incorporated some words of African, Spanish, Native American, and English origins, giving it linguistic features found in Louisiana.

Can a French speaker understand Cajun?

The vast majority of words, structures and pronunciations used in Cajun French would be recognized and understood by fluent French speakers from other countries even though some of those them are not current anymore in Standard French.

Here are a couple of examples of some Cajun words and expressions:

In 1921 the Louisiana Constitution was changed so that all school classes had to be conducted in English, which led to many Cajuns growing up without learning their ancestral language and Cajun French has been put on hold. The Cajun community is currently working at preserving the language of their ancestors. A dictionary of Louisiana French is now available and this app Learn Cajun, and will help you expand your Cajun vocabulary!