Do you know your head from your output jack? Whether you’re playing acoustic or electric, knowing the parts of a guitar will help you communicate about your instrument and learn to be a better player. Get ready to dive into this guitar guide and you’ll learn never to mix up your neck and fingerboard again!

Let’s start at the top, or the head, of your guitar. You’ll find your tuning keys attached to the head of your guitar. These can be turned to loosen or tighten each string and adjust the pitch. Many guitar makers also include their brand on the guitar’s headstock.

The head of your guitar meets the neck at a small piece called the nut. In upscale guitars, the nut may be made of ivory, but most guitar makers will substitute hard plastic. The nut has six grooves for the strings to rest in, which hold them in place. 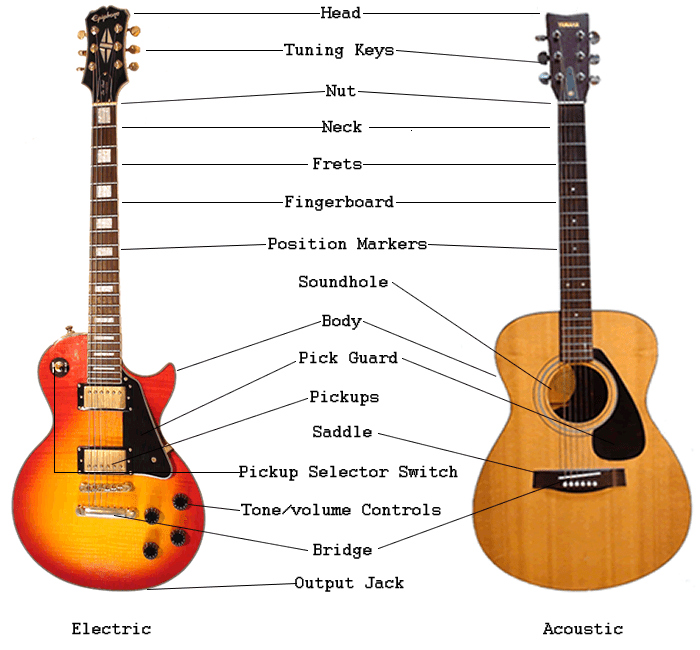 The neck of your guitar is the long, narrow piece of wood that runs from the head of your guitar down to the body. The flat piece of wood on top of the neck, where the strings rest, is called the fingerboard. The two terms are often confused because some guitarists use “neck” and “fingerboard” interchangeably, but they are not the same thing. Now that you know, don’t make that mistake!

The wire insets that mark the fingerboard are called frets. Frets indicate the position where a string must be pressed down to produce a specific pitch.

You may also see dots or other shapes laid into the fingerboard under the strings. These are position markers and they help you keep track of which fret you are playing. It is common to see position markers at the third, fifth, seventh, ninth, twelfth, and fifteenth frets of your guitar.

The main piece of your guitar is called its body. On an acoustic guitar, the body is hollow to amplify the sound of picking or strumming the strings. Electric guitars have solid bodies, so they tend to be heavier.

The pick guard rests on the body of the guitar, near the soundhole on an acoustic or the pickups on an electric. The pick guard protects your guitar from getting scratched by your pick and from fingermarks.

Related: How to Properly Hold a Guitar Pick

You may have noticed that there are a certain parts of a guitar that an electric guitar has that an acoustic guitar does not have, and vice versa. The main way that acoustic and electric guitars are different is in the way that sound is amplified.

Electric guitars are amplified by electric pickups. The pickups are metal pieces you will find on the body of the guitar in about the same place as a soundhole on an acoustic guitar would be. Pickups turn the vibrations of your strings into electric currents, which are then played through the speakers of your amplifier. The output jack is where you plug in your cable from your guitar to your amp.

Different guitar models and brands often rely on the type and number of pickups to distinguish the tone and sound of their guitars. You will notice a small switch on your electric guitar near the pickups. This is the pickup selector switch, and it lets you choose which pickup on your guitar you would like to use to pick up the sound vibrations. Experiment with this switch to see which of your pickups produces the best tone for your style of playing. You should be able to get a variety of sounds out of the pickups on your guitar.

If you are playing on a Fender Stratocaster or Squire, your guitar likely has single coil pickups. These pickups are comprised of a single coil of wire and two small, horseshoe-shaped magnets. Single coil pickups tend to have a bright, twangy sound, but they also can produce a lot of feedback and noise. The single coil electric guitar pickup was used in the first Fender guitars and is still used today in modern Stratocasters.

Another type of guitar pickup, P90 pickups were introduced to the public on Gibson’s Les Paul Gold Top guitar in 1952. Basically, the P90 is a single coil pickup with a wider coil. The wider coil is able to pick up a wider range of sound vibrations from the strings, resulting in a fuller, less bright sound.

However, Gibson’s greatest contribution to the electric guitar is the humbucker pickup. Humbucker pickups use two wire coils in opposition, to pick up a clearer tone and “buck” the “hum” of traditional single coil pickups. Humbucker pickups will cause less feedback and noise and produce a rich, warm tone.

Different Parts of the Acoustic Guitar

For more information on acoustic guitars, TakeLessons Teacher Jason M. recently visited our offices to record a video for you. Watch as he goes over the different parts of an acoustic guitar, and check out other videos in the series for more great guitar tips and tricks!

Now that you’re more familiar with the parts of a guitar, you can learn more about playing scales, chords, chord progressions, and more! One of the most fun things about playing guitar is experimenting with your sound to find out what you like. So above all, have fun and rock on!

For guitarists who want to see big improvements in their playing, TakeLessons offers private, one-on-one guitar lessons with the best local teachers. Our teachers tailor your lessons to your unique needs, so you’re set up for success. Search for the perfect teacher today!

Speed is an important factor to mastering any song. After you common chords and techniques, it’s time to increase your speed. This interactive class will walk you through tips to improve your transition between chords and make your songs sound effortless. Your instructor may show you how to practice using a metronome, plus share tips to increase your strumming and picking skills on the guitar. You will also have the opportunity to play in front of your instructor and other students!
Wed 5/12 @ 12:00pm PDT Learn More

In this class you will learn, G Em Cadd9 and D chords. We will then use them to play several classic songs. By various artists like, Van Morrison, Green Day and Taylor Swift.
Wed 5/12 @ 12:00pm PDT Learn More

In this group guitar class, you’ll learn a sequence of chords that share the same note on top. This class will help you learn how guitar chords are made and help you memorize chords faster. Get the secret to playing hundreds of popular songs and add this class to your calendar!
Wed 5/12 @ 4:00pm PDT Learn More

Learning how to play guitar music by ear is a special skill that is earned through consistent practice. This in-depth class will explore tips and tricks to strengthen your guitar listening skills. Students will listen to basic guitar strums to deconstruct and analyze the musical notes. A live teacher will guide the class in real-time to explain strategies for listening to guitar melodies or chords and developing the ear training muscles necessary for playing guitar by ear. During the live, group class, students will listen and take turns guessing the differences between major and minor, diminished, and augmented triads. Students will also have the opportunity to play a simple guitar melody by ear, with peer and teacher feedback.
Wed 5/12 @ 5:00pm PDT Learn More

In this class we will learn the major scale in its five positions and I will introduce you to the concept of intervals, we will work with them on the following lessons.
Wed 5/12 @ 7:00pm PDT Learn More

If you’re ready to start learning the guitar, these classes are just for you! They’ll give you the basics you need to build a solid foundation of guitar skills. You’ll be introduced to scales, chords, and reading music on the guitar so you can begin playing songs!
Thu 5/13 @ 12:30pm PDT Learn More

This group guitar class will give you a chance to practice guitar solos from your favorite songs, or learn new and practice solos that you have not heard before! If you are up for the challenge, you can also practice improvisation or play your very own guitar solos! Your instructor will guide you through exercises to improve your skills and you will get a chance to play along with others.
Thu 5/13 @ 4:00pm PDT Learn More