While trying to wrap your head around all the different guitar chords, you may feel slightly overwhelmed. To make your life easier, we put together this handy list of cheat chords.

The chords below are listed under the keys where they work best. (Once you’re comfortable with playing cheat chords, you can advance to these basic guitar chords). 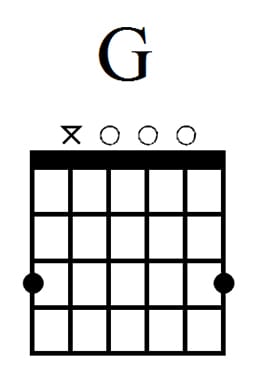 Make sure your finger (that’s fretting the low note) is laying down just enough to play the low G and dampen the A string. 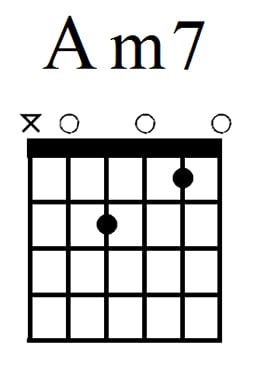 When you see an Am chord, try to play an Am7. It has a fuller sound, and once again, you only need to use two fingers.

Here is a chord progression that uses these two chords with C.

The Am7 also works well in this key. In addition, try these two chord alterations: 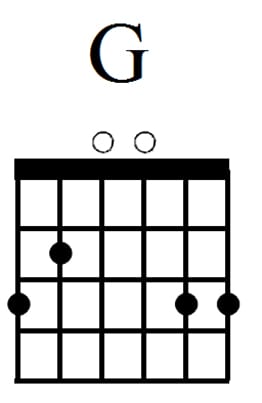 This is very similar to the traditional G fingerings, but adds a fretted D on the B string in order to make it easier to transition between chords. 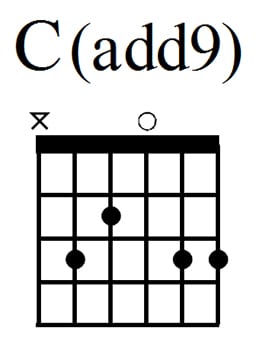 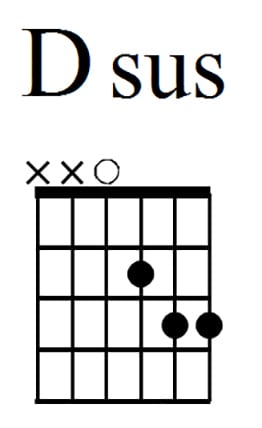 The Dsus chord is a good replacement for the D chord. You need to listen to make sure it doesn’t clash with the melody, but when it works, it makes for a simple transition between the C (add9) and G, because you never have to move your pinky and ring finger.

This cheat chord can also add a lot of interest to your strumming if you move from the Dsus and D. In other words, the chord chart might only have a D written, but you could play a Dsus going to a D, to make the music sound more interesting.

Here is a chord progression that uses these new easy guitar chords.

Related Article: How to Properly Hold a Guitar Pick

The G simplified also works well in the key of D. 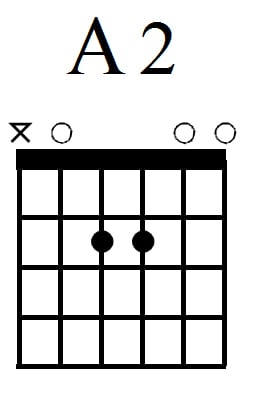 The A2 chord works as a very simple replacement for the A chord in the key of D. It only takes two fingers, and it has a nice open sound with a little extra color. 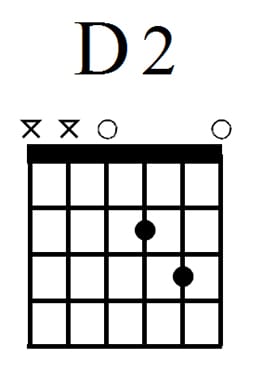 The D2 can replace any D chord. Again, it’s easy to play since it uses only two fingers.

Here’s a chord progression that uses these chords. Notice you never have to use more than two fingers on any of these easy guitar chords.

D2 and A2 will also work well in this key. Here’s another chord to try in the key of A. 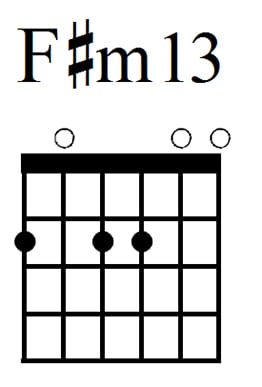 This is a little easier to play than the F#m7, and you can use it to replace the F#m chord or F#m7 chord. It’s a little more muddy sounding, so you’ll have to decide if you like it or not. I think that in the middle of a song, it sounds fine and is easy to play.

The A2 chord works well in this key. If you add these three chords, you can play a  full chord progression using only two or three fingers. Use the same finger position for all three of these chords. 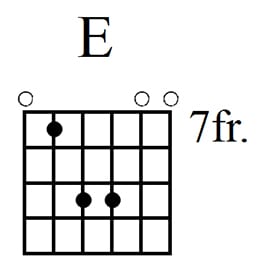 Notice this chord is played at the 7th fret. By playing this version of E, you’ll find that the rest of the progression flows naturally.

You can also use the normal E, but this gets your fingers into position for the other chords. Also, it has a wonderfully big, open sound. 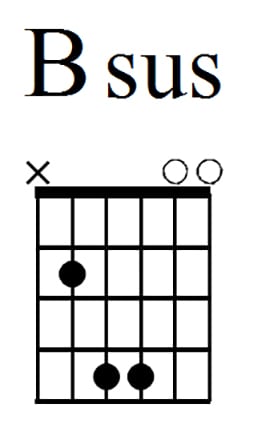 Use the three-finger position (from the E above) to play the Bsus. It’s a good replacement for the B chord, as long as it doesn’t clash too much with the melody line. Once again, it’s much easier to play since it doesn’t require a barre chord. 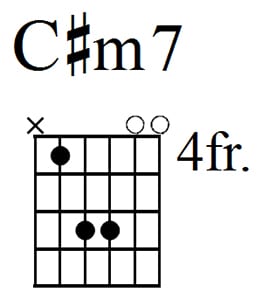 Here’s one more chord you can play with the same finger shape. Notice it’s played at the 4th fret. It’s a good replacement for the C#m chord, and like the Bsus, much easier to play.

These last two bonus chords have a nice jazzy feel, and they’re easier to play than the normal versions. Use them to replace the F and C chords when you want a more dissonant jazz sound. 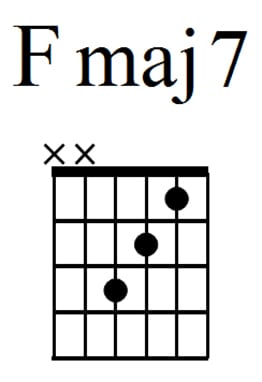 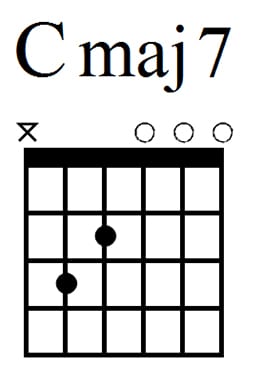 Now you know 12 easy guitar chords. With these cheat chords and a capo, you should be able to play in any key, and in many cases, you can play with only two fingers!

Buy a good guitar............there's plenty now for 100 bucks or so and also hold it right ! Don't slouch ! Just learn 1 or 2 chords, G and D for instance and just keep strumming and changing chords, there's no miracle to playing guitar you just need to practice at least 10 mins a day til your finger tips harden and your brain/hand start to communicate !

Would have been cool if they added the fingerings and the original (harder chord) so we knew how to play the difficult chord in question.

Horrible advice. Just learn the cord. Am7 does not sound like Am.
Comments are closed

Looking to start playing the acoustic guitar? I will show you essential fundamental techniques to begin your guitar playing adventure! You don't need to be able to read sheet music to play. I will cover such basics such as: major and minor chords, strumming patterns, individual note picking patterns, just to name a few. Grab your acoustic and get ready to have some fun learning how to play your acoustic guitar!
Thu 6/17 @ 12:00pm PDT Learn More

We will learn to strum and sing some favorite Folk and Pop songs. You can either sing along or simply say the lyrics along with the rhythm. Whether playing in a jam session or other gatherings, music is a great way to meet others and enjoy fun activities. We will go over some two finger and three finger chords. Why, and we might even graduate to four finger chords!
Thu 6/17 @ 1:00pm PDT Learn More

In this class I will help you see more shapes of scales you may/may not know- Everyone learns scales differently so this is just my take. We will be improvising over basic forms - playing over one chord, the blues and simple progressions like 1 6 4 5, or pop tunes. We will talk about ear training and learning solos by ear (using YouTube)- this is essential if you want to see how your favorite players make all these scales and chords into a language/style. You can do tabs of course, but starting ear training sooner than later is recommended
Thu 6/17 @ 1:00pm PDT Learn More

If you’re ready to start learning the guitar, these classes are just for you! They’ll give you the basics you need to build a solid foundation of guitar skills. You’ll be introduced to scales, chords, and reading music on the guitar so you can begin playing songs!
Thu 6/17 @ 4:00pm PDT Learn More

In this class you will learn how to play with alternate picking technique and how to execute this technique with the properly movements.
Fri 6/18 @ 2:00pm PDT Learn More

In this class, we will discuss how to start fingerpicking on the guitar using the famous flamenco theme of Malaguena. We will start by using our thumbs to pick the strings, and then gradually add more fingers into the mix! By the end, you will understand guitar arpeggios and will be applying them to traditional flamenco! Prerequisites: have taken an intro to guitar class, or my intro to flamenco guitar class offered multiple times a month. Can play melodies with your thumb/pick
Fri 6/18 @ 2:00pm PDT Learn More

How To Play AC/DC songs

Are you a AC/DC fan? Do you play guitar? Well, you have come to the right place! In this class you will learn how to play many classics from AC/DC such as: Back in Black, Highway to Hell, You Shook Me All Night Long, just to name a few. Come join the fun!
Fri 6/18 @ 3:00pm PDT Learn More
Learn Guitar Free Today