Chords are the foundation of all of those guitar riffs you love so much. Here, guitar teacher Kirk R. walks you through the basics of guitar chords and the importance of knowing how they’re constructed…

Guitar is an amazing instrument, not only because of all that it can do, but also because of how great it can sound when not doing much at all. One of the ways that guitar is most often heard is by strumming the standard chords that beginner guitarists learn.

However, I often interact with guitarists who don’t realize how many other possibilities exist on the instrument. Today, we’re going to look at just one small idea that you can use to stretch basic different guitar chords and better understand why we play the chord shapes that we do.

What Does It Mean When We See a Chord Symbol?

Let’s start with a very basic question: what is a chord? A chord is three or more different notes played together. That means that technically a power chord is not a chord at all, because there are only two different notes…but they sound good, so let’s keep using them!

Notice that there was no mention of strings, frets, or guitars in that definition. That’s because when we play a G chord on the guitar, we’re playing the same three notes as when a G chord is played on a piano, by an orchestra, or in production software.

Now, how to play guitar chords? Let’s take a look at this three-note chord idea. If you play a G chord on your guitar like this:

You’re playing (from low to high) G-B-D-G-B-G. Yes, despite all that stretching and playing all six strings, you end up with just three notes! So when the bass in a band plays a B, the lead singer sings a G, and the tuba player plays a D, what chord do you hear?

What does that mean for us guitarists? If I’m noodling my way up the neck and then quickly have to play a G chord, jumping all the way down to the 3rd fret might not be an option. However, if I can find some combination of G, B, and D near where I’m already at, I don’t need to. How about something like this:

There are tons of options that open up when you realize that every time you see a G printed over the lyrics, you don’t have to do the same chord. Of course, the usual G shape wouldn’t get used so much if we didn’t like the sound, so if it’s convenient to get to and you like the sound, use it by all means!

How to Build Guitar Chords

Now that you know a little bit about how a chord works, let’s talk about how we build chords from scratch. This can get a little complicated, but stick with me – I’ll keep it simple to begin with.

The usual major and minor chords (if it’s just a letter without an “m,” it’s major) are built of just three notes like we’ve seen. Notice that in the G chord they’re also just two letters apart:

Luckily, this pattern works for all chords within a key. Let’s take a look at the key of C, so we don’t have to worry about sharps or flats. So what notes would we use to build a C chord? Let’s take a look:

So we now have our three notes, C, E and G for the C chord that we can play anywhere on the guitar. If we want to play an Am chord along with it, we can use the same pattern:

…uh oh, we ran out of letters. Let’s just rearrange a little bit:

So now we end up with A, C, and E to play anywhere we like.

Here are a few examples of different sounds you can get from the Am chord:

What Difference Does It Make?

Hopefully you can now add a little extra flair to some songs in which the guitar part might have seemed a little boring at first glance. Perhaps you’ve run into this chord progression before:

Here are a few ways that I might have improvised the chord voicings (depending on style and context) if I were to see a progression like this. Some are faster than others, but they’re all fairly simple if you know the basics of how to build chords on the guitar.

Below are a few options for C and G chords that you could use in this progression. Remember the point isn’t so much to memorize all the shapes, but to understand how these chords work so that you can find the notes of the chord anywhere that you need them. 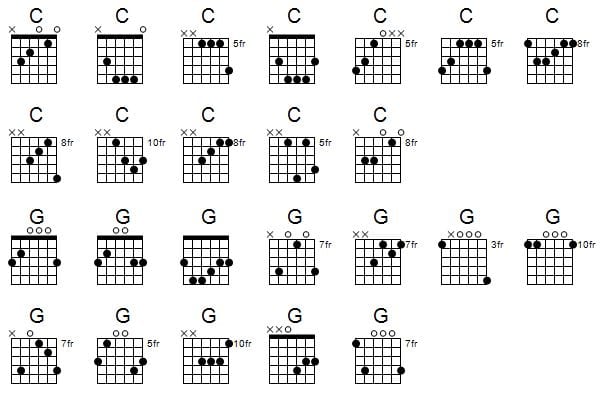 Now it’s your turn to take a few minutes, go back to a song that you thought sounded too boring, and add some pizzazz! Chords are so easy and versatile that you can transform any song.

If you have questions about how to play guitar chords after reading this, or you’re not sure where to go next, click on the “Ask A Question” button on my profile!

Post Author: Kirk R.
Kirk is a classical, bass, and acoustic guitar instructor in Denver, CO. He earned a bachelors of music in Guitar performance at The College-Conservatory of Music in Cincinnati and he is currently pursuing a masters degree in performance.  Learn more about Kirk here!