Curious about recording acoustic guitar tracks at your home studio? Check out these helpful tips for before and during the session from Perth Amboy, NJ teacher Jeff S...

If you’ve tried recording acoustic guitar before, there’s a good chance you know how demoralizing it can be to think you’ve captured a wonderful performance, only to learn later that it’s sonically flawed. I’d like to offer some tips, with hopes they will assist you in rendering consistently clean and clear acoustic guitar tracks.

Before you even begin, here are some tips for setting up:

Next, here’s a list of some of the most important tips to keep in mind during your session:

As you can see, there are a lot of important details to keep in mind when recording acoustic guitar on your own. But along with those concerns and oversight measures comes an enpowering experience with lots of advantages. Those include the freedom of recording any day and time you’d like without a reservation, deposit, or committing to a minimum block of hours; the ability to leisurely listen and evaluate the quality of various “takes”; experimenting as much as you’d like with altering the position of equipment and recording environment without oversight or added expense; using and comparing different types of mics and guitars, etc. So take your time, enjoy the experience, remember to have fun, and pat yourself on the back every once in a while. 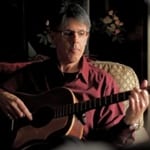 Jeff S. teaches guitar, ukulele, speaking voice, songwriting, and more in Perth Amboy, NJ, as well as online. Jeff has created and taught songwriting and music business classes at colleges, universities, and music schools throughout the country for many years. Learn more about Jeff here!