Many beginner musicians want to learn to improvise on the guitar, but just don’t know how to start. In this guest post, Greg O’Rourke from fretdojo.com teaches you three easy tricks that will supercharge your guitar scales and bring more life to your solos.

Have you ever tried to improvise on the guitar and it sounds like you’re just running scales up and down the fretboard?

Regardless of what style you want to improvise in, only knowing the scales isn’t enough.

To sound like a convincing improviser, you need to learn the vocabulary of the style you want to play — meaning the particular patterns and approaches that give a style of music its unique sound.

Which is what this article is all about.

By the end of this post, you’re going to learn three easy jazz tricks to transform any boring old guitar scale into a hip, jazzy-sounding pattern that will supercharge your soloing.

Let’s get into it!

The approach I’m going to show you is to:

For this lesson we’re going to use the ol’ faithful C major scale.

Let’s use the well-known pattern commonly played in the 7th position on the fretboard (for those of you who know the CAGED system, this would be the “E” pattern of C Major):

If you aren’t familiar with this guitar scale pattern yet, practice playing bits and pieces of it over the backing track to get familiar, as the video below demonstrates:

Look at the notes that sit on the 3rd string for this guitar scale:

Replace this finger pattern with a ‘4123’ pattern instead:

To get used to the idea of replacing the finger pattern, play the simple exercise below.

Now, whenever you play the 3rd string as you improvise, replace the ‘134’ pattern with the new ‘4123’ pattern.

Go on — try it! Here’s the backing track once again:

Do the same finger pattern replacement on this string too.

I want you to practice soloing over the backing track once again.

Let’s have a look at how we can mess with the other strings to get more of that jazzy sound into our soloing.

Here’s the finger pattern on the 1st string in this C Major scale:

It’s time to soup up this finger pattern too.

For this approach to work, we need a pattern that will finish on a scale note.

So, we’ll need a different pattern. Let me think…

How about this one:

This ‘43241’ pattern is one of the most commonly used vocabulary ideas in jazz, and it’s easy to play too.

To get familiar with this new pattern, play this exercise on the 1st string:

Improvise with the backing track in a similar way to what you did on the 3rd and 4th string.

While you’re at it, make it more interesting by experimenting with different rhythms and accents each time you play the pattern.

I’ll show you what I mean:

Great, so we have now jazzed up every string of this guitar scale…

Hang on — it looks like one string hasn’t been covered yet: the 2nd string.

The problem with the 2nd string in this C Major guitar scale pattern is that there are only two notes on the string.

D’oh! We can’t play the other two patterns you’ve learned so far, as they were for three notes, not two.

Don’t sweat! There is a solution.

We’re going to use enclosures to surround (or ‘enclose’) each of these two-note scales.

I know what you’re thinking:

I knew you were going to ask that.

Enclosures are one of the most commonly used devices found in jazz solos.

They give a great chromatic sound and are characteristic of jazz bebop in particular.

Enclosures are useful as they can be added to any note in any guitar scale.

Here’s an example of an enclosure:

In this next exercise, you’re going to apply an enclosure to each of the two notes found on the 2nd string of the C Major guitar scale pattern:

Now try to improvise on the backing track with enclosures on these notes whenever you hit the 2nd string:

Note: You can do enclosures on any note of the scale, not just these two scale notes on the second string — try it and see!

Step 4: Combining it All Together

Fantastic! We have now jazzified every string of C Major guitar scale.

Have a go at playing the substituted finger pattern for each string one after the other, going from the 1st string to the 6th string:

Now improvise on the backing track by adding the relevant pattern for each string here and there as you solo.

A couple of things to be aware of as you improvise on the guitar:

Huzzah! Just by adding some simple finger patterns, you know have an interesting, jazzy foundation for your guitar solos.

You can apply this technique to any guitar scale:

So there you have it: three simple finger patterns that you can apply to any guitar scale, to instantly get that jazzy sound.

What guitar scales do YOU have under your fingers to jazz up?

Let me help you out.

Download a free copy of my Essential Guitar Scale Patterns PDF eBook, and you’ll learn the most important guitar scale shapes that you need to know for any style of music.

I would also like to give a shout-out to Matt Warnock at mattwarnockguitar.com, whom I credit first showing me these innovative ideas for scale patterns. He’s a great teacher and has a ton of resources about jazz guitar improvisation on his site.

I wish you well in your guitar practice. Happy soloing!

Ready to learn more? Find a local or online guitar teacher, or check out our live, online group classes for guitar! 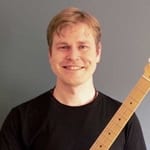 Post Author: Greg O’Rourke
Greg O’Rourke is a professional Australian jazz guitarist and holds a Bachelor of Music (Hons) with the Australian National University. He’s also the owner of fretdojo.com, which offers detailed lessons and eBooks on how to master jazz guitar.

2 thoughts on “Guitar Scale Hacks: How to Jazz Up Any Scale & Start Improvising”