Slide guitar has become an interesting genre of music that has intrigued many musicians both young and old. This art originally stemming from ancient Polynesia and Africa has greatly influenced blues and country music styles. As a beginner guitarist, it can be confusing wondering where to begin learning about this unique style, and knowing what to listen to can be difficult to come across. In this article, I will share some of the basic techniques in the bottleneck slide guitar arsenal, as well as provide you some listening examples of slide guitars being used.

How to Hold Notes 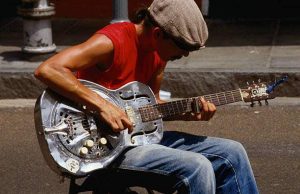 Before attempting any technique, it is important to understand how to actually press notes on the guitar. For slide guitar, this task may feel more awkward than you think! Think about it; you have a thick cylinder wrapped around your finger that you now have to use. Because of this, control over your finger becomes more difficult!

First, choose what finger you want to place your slide. There is no wrong finger! Each artist has a preference as to which finger they put their slide. However, the pinky finger is commonly used as it allows you to use your index, middle, and ring fingers to fret most of your standard chords.

Once you have decided on a slide placement, now you can try placing the slide onto the strings. Start by only touching the strings, meaning do not press down. A common mistake is to press down hard into the strings and then slide. While this is a technique on its own, you can hear that when this is done, the tone of the instruments does not sound smooth.

So, how do we avoid this? Just touch the strings! If you have been playing guitar for a while, you may know the technique of harmonics. That is the same amount of pressure needed to slide smoothly! Just touch the string but do not push it into the fretboard. Keep the slide perpendicular to the fretboard to start! Experiment with the amount of pressure you apply, and aim for a smooth tone without stutters.

The most basic technique in slide guitar is the glissando. Glissando is the technical term for a slide in classical terminology. The term sounds exactly what the action is; we take our finger and play a note, and then move/slide our hand to another note on the instrument.

When starting to play glissandos, I recommend starting small. For example, pick a note of your choosing and then try to slide to a note only one fret away. So, if you were holding the second fret on your D string, you would then slide to the third fret on the D string. Once you are comfortable with that, then you can increase the distance. Eventually you’ll be sliding all over the fretboard and making huge jumps in hand position. Remember to pick the string before sliding!

Vibrato is an important technique in all genres of guitar playing, but slide guitar vibrato is definitely a unique sound. A vibrato basically means to bend a note out of pitch, which makes the guitar sound almost voice-like. To do a vibrato, gently wiggle your hand side-to-side after you slide to a note. You will hear this sort of “waw-waw-waw” sound as the note you slid to is bending out of pitch. Experiment with the speed of the vibrato. If you want to sound more like a human voice, start the vibrato slow and then gradually increase the speed.

If you want to really understand vibrato, listen to as much choir and opera as you can, and pay attention to the voices! Try to copy the qualities of the voices you hear.

What if we want to pick only a single note instead of an entire chord? We actually have to mute certain strings so we only hear the notes we are picking. If we did not do this, the slide would sound muddy and have a lot of overlapping notes we don’t want.

Start by picking notes with your treble strings. Place your thumb on the D string, index on G, middle on B, and ring finger on E. Placing your picking fingers on these strings mutes them. Now, if you want to pick a note on one of these strings, you just have to pick the note while the other fingers remain planted. If you know how to fingerpick, this will feel natural to you! For example, if you wanted to only play your E string, then your ring finger would pluck while your thumb, index, and middle fingers stay put.

It is very common to change the tuning of the guitar to play chords more easily while sliding. However, if you are an absolute beginner, I recommend staying in your standard tuning, meaning your regular EADGBE. I think changing the tuning as a beginner is too confusing. Focus on the technique first! However, if you are ready to experiment with other tunings, here are some common ones to get your started…

To close this article, I will provide you with some songs to listen to. I always recommend to my students to listen to as much music as possible to increase your understanding. Here are a few slide guitar songs to get you started…