Chords are the heart of musical harmony, and learning how to build and use guitar chords is essential not only to learning your favorite songs, but also to beginning to create music of your own. 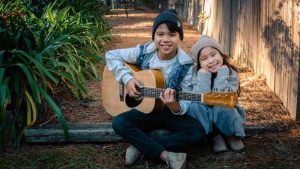 Often, guitar players begin learning chords by simply memorizing shapes, and while there is nothing wrong with this approach as a short term trick for learning particular songs, it is extremely limiting in the long run. If you put a little time into understanding how chords are built, you can figure out how to play any chord you come across, as well as how to use alternate voicings (different rearrangements) for the chords you already know.

So, Just What Is a Chord?

A chord is simply a combination of notes (at least three) that are combined either at the same time or in sequence.

If we think of music as a language, notes are the letters, but chords are the words. On their own, notes have no meaning. But by combining them we can create the sonic structures that evoke emotions and tell stories. Learning how to play guitar chords is the surest way to increase the depth of your harmonies.

The most common type of chord is what is called the triad. It is made by combining three notes from a given scale or key, skipping one note in between each.

For instance, if we take a C Major scale, which contains the notes C, D, E, F, G, A, and B, we can build a triad on each note of the scale by taking that note skipping over the next note, and then skipping again. e.g our first chord (C major) would consist of the notes C, E, and G. Our second chord (D minor) would be D, F, and A, etc.

Triads come in four different flavors (major, minor, augmented, or diminished), but the formula for building them is the same if you know your parent scale. So we’ll save the distinction for another lesson.

Now that we know what notes are in our chord, we just need to decide how to voice it (which register of each note we will use, and what order we will put them in). When you’re first learning how to play guitar chords, you will probably learn one version of each chord, but in fact there are dozens of different voicings for each chord, and each will sound a little different.

When voicing a triad, there are four basic rules:

1) You must use all three notes of the chord.
2) Don’t use any other notes (if you do, it becomes a different chord)
3) You may duplicate any of the notes.
4) You may arrange the notes in any order.

First, we need to find a C. Let’s start at the bottom. The lowest C on the guitar in standard tuning is on the 3rd fret of the A string, so let’s put our ring finger there. Next, we can find an E at D string 2nd fret, which we play with our middle finger, and we get a G by leaving the next string (the G string) open, which looks like this:


Now, we could stop here. We’ve satisfied the first two rules. We used all three notes of the chord (C, E, and G) and we didn’t use any other notes. So, this three note chord is in fact a full C major.

However, we can make this chord richer by adding duplicate notes in other registers according to rules 3, and 4.


If we look at our B string, we’ll notice that there is another C (an octave above our original C). Let’s add this to our chord, by using our pointer finger there. And the next string (our high E), is already part of the chord, so let’s leave it open. Now we have this fuller voicing of C major.

That sounds much nicer, doesn’t it? This is the most common voicing of C major (the one most people memorize if they are just memorizing chord shapes). You may recognize it. But learning how to play guitar chords also means thinking about alternate voicings and trying to find the one that works best for the song you’re playing.

For instance, one common alternate voicing of C major entails using your pinky to play the 3rd fret on the high E string. This changes the top note of the chord from E to G. Notice that this is fine because both notes are part of the chord, and we have already played both of them lower in the structure, so we can duplicate whichever one we want and it will still be a C major chord.

Another option is to add a note on the low E string, below our C (either an open E or a 3rd fret G). This is less common because the most stable version of a chord will have the root (in this case C) as its lowest note.

However, there is no rule that requires this, and sometimes putting another note in the bass (called an inversion) makes for a really interesting sound or transitions well to or from the other chords around it in the song, so play around with it and see if you like it.


The Possibilities Are Infinite 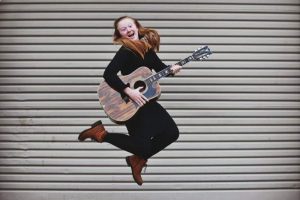 Once you’ve mastered C major, see if you can figure out how to play the other chords of the key (and try to find alternate voicings). With these simple tools, you are well on your way to being able to build and voice chords yourself. This will launch you beyond simple memorization, and into the world of creating your own music.