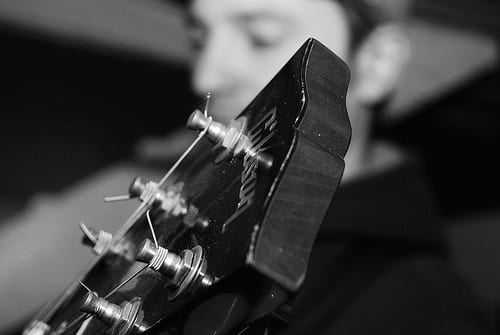 Struggling with your guitar practice? If you’re not improving as much as you expected, poor practice habits might be to blame. Revamp your attitude and your routine with this advice from Clearwater, FL  teacher Jeremy R…

I’ll never forget the first time I saw it. I couldn’t believe what the tablature was saying. Here in my hands was the Steve Vai guitar workout. It was an amazing assortment of flying fingers and knuckle-breaking speed. I took it home and for hours attempted the same type of craziness that Vai pulls off so fluently. After about two weeks I was able to play half of the simplest of the exercises, but not very well. I persevered but after a month still wasn’t making very much progress. As I became increasingly frustrated, I stopped doing the Vai exercises and soon moved on to playing something else.

What I failed to realize was that I wasn’t Steve Vai, accomplished guitar virtuoso. I was Jeremy, who had been playing guitar for two months. There was no way that I was going to be able to play like Vai in the one or two weeks that I would have liked.

I tell you this story to illustrate the importance of having a regular and regimented practice routine. The goals and milestones will always change over time, and your focus may change as well. The formula for effective practice, however, has and always will be the same. It is a story of incremental progress and inspiration.

I like to break my practice down into 30 minutes. Sometimes I might practice more, but never less than 30 minutes. Some teachers recommend practicing two or three times a week for 30 minutes. This is normal and good. Too much practice and you will risk burning out. Too little of a challenge and you’ll be bored with mindless scales until your next lesson. Here’s a good breakdown of 30-minute practice session:

The first 10 minutes: During my first ten minutes I review the things that I have been working toward. This is as much of a warm-up for me as it is keeping recent techniques in my memory and fresh on the fretboard. For instance, if I was working on bending strings last week, I play ten minutes of blues with string bends, etc.

Second 10 Minutes: This is where the hard work comes in. I try to tackle something new. It doesn’t have to be technically difficult. Maybe it’s putting expression in a song and playing with conviction.  Music is so cool because it doesn’t have to be a blistering shred of notes that fly off the fretboard to be amazing!

Third 10 Minutes: This is my favorite part. It’s doing something fun on my instrument. For example, I might turn on the radio and play along to whatever song is on. It’s an interesting challenge and its fun to learn songs that wouldn’t necessarily be my preference.

It’s important to remember to take a break after the half hour. If you want to keep playing, great – but you do need a break.  Do this regimen three to four times per week for a month and you will make great strides in short time, because you’re working smarter and not harder. Now go forth and rock the world!