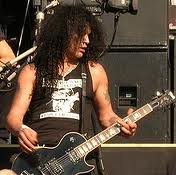 It’s hard to imagine the rock and roll world without Guns N’ Roses’ “Sweet Child o’ Mine” – its instantly recognizable intro, the mid-song guitar solo – Rolling Stone magazine even included it on its list of 40 Greatest Songs that Changed the World.  So it’s no surprise that Slash – the man who penned that world-changing riff that starts the song – is being recognized with a Lifetime Achievement Award by Guitar International.

Now it’s time to test your knowledge: what other guitar riffs have made a notable impact on the rock genre?  Here are the top 5 from a recent list from Gibson.com:

Angus Young channeled the rock and roll gods when he conjured the opening riff for the title track to AC/DC’s Back in Black album. The song was their way of paying tribute to the band’s fallen singer, Bon Scott. Three staccato-hard, crunchy chords – E, D, A – then a sliding, bending scale back down to E. The riff is unique, bone-crushing, and it instantly grabs your attention.

Sinister, menacing and filled with foreboding, “Iron Man” remains, for many, the heaviest heavy metal riff of all time. In 2008, Tony Iommi told Gibson.com that the riff came to him during a rehearsal. “It was one of those occasions when I said, ‘I’ve got a riff, I’ll come up with something.’ Then I just built it … it just sort of happened.” Adding to the riff’s power is the fact that Ozzy Osbourne chose to double the guitar part with his vocal, an approach the singer often took with Sabbath songs. Hearing the riff for the first time, Osbourne remarked that it sounded “like a big iron bloke walking about.” So dark were “Iron Man” and other Sabbath riff-rockers, early critics often overlooked the melodic power at their core. Black Sabbath were in fact huge Beatles fans who simply wanted to give their material a frightening twist. “It was something different,” Iommi said, “something about supernatural things.”

Jimmy Page can claim more than a few of the greatest riffs in rock, and Led Zeppelin fans will always debate which one is the best. But none packs more swagger than the riff that drives “Whole Lotta Love.” Page played the heavy blues riff on his Sunburst ’59 Les Paul Standard, although there’s some debate as to where and when the riff originated. Zeppelin bassist John Paul Jones said it came out of an in-concert jam for “Dazed and Confused” and other sources attribute it to another concert improvisation, but Page has claimed that it was one of the riffs he wrote during rehearsals for Led Zeppelin II. The song became an instant classic and was performed at every subsequent Zeppelin gig (often as the closer).

They are, quite simply, the holy chords of rock. By guitarist Ritchie Blackmore’s standards, “Smoke on the Water” is actually a pretty simplistic riff, considering this is the same mage who summoned “Lazy,” “Burn,” “Woman from Tokyo,” “Man on the Silver Mountain” and a host of other alchemic finger-twisters. But the impact of “Nuh. Nuh. Nuh. Nuh. Nuh. Nuh-uh. (etc., etc.)” is undeniable. Ask any music store clerk, any marching band director or any guitarist worth his salt and they’ll all tell you that those driving chords are a core component of the universal language of rock.

No other riff has ever captured the essence of rock and roll as succinctly, elegantly and infectiously as the one for “(I Can’t Get No) Satisfaction.” With just a handful of notes, Keith Richards crafted a guitar-based mantra upon which rock’s rebellious spirit could be perfectly hung. The riff came to Richards in his sleep, and he woke up just long enough to record the part on a portable cassette player. The band later recorded an acoustic version at the Chess facility in Chicago, and then did the definitive version – using a Gibson distortion pedal – at RCA Studios in Hollywood. Remarkably, Richards at first envisioned the riff as a horn line. “The fuzz tone came in handy so I could give a shape to what the horns [would later] do,” he writes, in his biography. “But the fuzz tone had never been heard before anywhere, and that’s the sound that caught everybody’s imagination.” Nearly a half-century later, it still does.

What do you think – are these the top 5 guitar riffs in your book?