The string family has a unique history, and a very unique look. Modern instruments have elaborate carvings adorning on the top, inlaid purfling supporting the cello’s rich sound, and beautifully stained wooden bodies. There are also internal posts and sound bars which allow the body to function as an acoustic amplifier across the cello’s wide range. If you want to know the cello parts names and how the instrument works, read on before your next cello lesson to get ready!

Like good musicians, let’s start at the top, where all string instruments have an ornamental scroll. Some instruments have unique carvings for their scrolls, such as lion heads. You may have seen instrument racks which hang violins and violas by the scroll, but cellos and basses are usually too heavy for these hanging racks. You wouldn’t want the scroll to snap under the weight of the cello’s body!

The scroll forms the top of the pegbox, which is a five-sided rectangular box with two holes on each side. The holes for the pegs are spaced apart, so they can be easily turned for large string adjustments while tuning. The pegs are held in the pegbox by friction, not adhesive, so the pegs are actually not perfect cylinders. Instead, luthiers carve the pegs in a cone so they fit perfectly into the pegbox and can keep the tension from the string balanced over the nut.

The neck of the cello is the rounded wooden piece between the pegbox and body, behind the fingerboard. The fingerboard is usually made of ebony (although many student cellos are wood that is painted black). On modern cellos, the fingerboard stops roughly halfway down the middle of the body, but it used to be much shorter.  The fingerboard is held on the neck and body by glue, so a skilled luthier can replace this part if needed.

The exterior body of the cello is three large parts: the front, back, and ribs, as well as small component pieces which help maintain its structure. The design of the body makes it a natural acoustic amplifier, reverberating the sound waves and directing them forward. The back of the cello can be carved from a single piece, or two distinct pieces of wood which are glued together. The front is similarly carved and glued, but also includes two f-holes which are the only openings on the cello’s body. 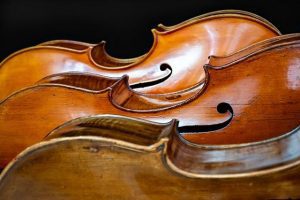 Both the front and back of the body are held on the ribs by a strong glue. It is important you don’t let your cello get too hot (for example, by leaving it in a hot car) because this will soften the glue. Your cello can be permanently damaged if the body is opened and the front or back get warped, so make sure to keep your cello out of extreme temperatures!

The single- or double-lined purfling around the outside edge of the body help support the curved structure, including the four pointed bouts in the center. Also supporting the structure of the cello are the sound post, which is located on the inside of the body on the left side, and the bass bar, affixed to the front of the body on the right hand side. The sound post helps carry vibrations through the bridge to the back of the resonating chamber, which then project forward through the f-holes.

The bridge is an important and finicky piece of the cello, located in the center of the body. It must be expertly carved by the luthier to unlock your cello’s full potential. The bridge has lungs and feet, as well as a heart. These are the most descriptive cello parts names, they look just like they are named! 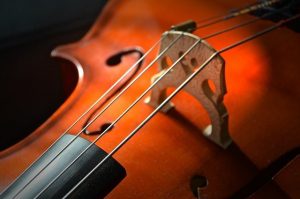 Always make sure your bridge isn’t being warped (or twisted) by uneven pressure on the strings. Sometimes if you only tune with your fine tuners, or only with the pegs, this can cause the wood fibers of the bridge to twist. Over time, the sound quality will diminish because the vibrations can’t travel as easily through the bridge into the sound post. Make sure the back (or bottom) of the bridge is relatively straight. If not, have your teacher help you adjust the tension and straighten the bridge. 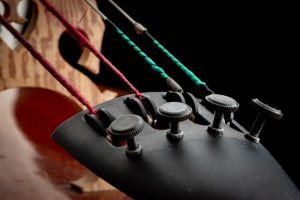 Now that you know all the cello parts names you’re one step closer to mastering the instrument! Next month I will have another article with all the names and styles for the bow (of which there are many). Happy practicing!