Keeping good cello posture is extremely important for preventing injuries to your back, shoulders, and neck. It takes thousands of hours of dedicated practice to become a cello player, and keeping good posture will help to improve your cello practice by letting you practice longer and more effectively.

Posture is easier to practice than it is to repair, so try to build good habits as early as you can and keep them. This article will give you five specific tips for improving your posture to reduce injuries or stress. 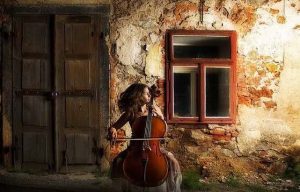 You may know triangles are the strongest shapes, and when it comes to cello they can help us make our posture stronger as well. Your cello and your body each have three points of contact. The body touches the chair it is sitting on, and the two feet on the ground in front of you. Your feet should be flat on the ground, not tilted upwards or against the legs of the chair. You can imagine your body weight centered over the cello, in the center of the triangle created by your feet and chair. You should sit on the front of the chair, so you can lean slightly forwards over the body of the instrument.

Your cello also has three points of contact: the end pin touches the floor, the upper body touches your chest, and the left bout wraps behind and above the left knee. You may be thinking, “what about the right knee?” The truth is, you don’t necessarily need to hold the cello with the right knee. Once you can open up the right side of your body by freeing the right knee from the cello it will give you more room to play with your bow speed and distribution.

My first time playing in a pit orchestra for a musical was my high school’s production of Seven Brides for Seven Brothers, and at that point it was the most I had ever played in a week. We started after school rehearsals two weeks before opening night, and one week before the premiere we began five-hour rehearsals with both casts in order to practice timing the dialogue, songs, and action with musical accompaniment.

I noticed my left shoulder started hurting during our second combined rehearsal, and it only got worse in the following days. At the time I assumed it was just the pain involved with playing cello for long periods of time and literally shrugged it off. But by opening night, my shoulder felt like it was positively burning after just the first act.

After this my private teacher and I worked on nothing but cello posture for two months. It’s much easier to form a good habit than to break a bad habit, and I had created a bad habit during those two weeks which took 8 weeks to solve. He noticed that when I played longer than 20-30 minutes my left shoulder started rising. The problem wasn’t my shoulders, but rather my back.

I had gotten used to leaning into the chair, rather than keeping my back straight and therefore supporting my shoulders. My left shoulder was rising because in order to reach high positions I had to stretch from the shoulder. In hindsight it’s a good thing my private teacher corrected this cello posture early on, because after this I could practice much longer and without the shoulder pain.

For example, shifting first position to fourth position is guided by the left elbow, which should start moving before the shift. You should relax your whole arm, and even your shoulder, so the shift can be smooth and controlled.

We usually think of cello posture as dealing with everything below the neck, but your face is important too! If you are making unintentional faces when playing it could be a sign that some other part of your body is stressed by poor posture.

The worst sign is clenching your jaw, which is not only bad for your teeth but can also make other parts of your body tense. One exercise is to let a short straw (or a toothpick) rest between your lips. If your jaw is relaxed it will be pointed down, but when you make a face or clench your jaw you will immediately notice the straw points up. This can also help you to keep your head up, so the straw doesn’t fall out.

5. Practice with a mirror

Alexander Technique is a method of posture training created by actor Frederick Alexander in the 1800s which is widely used in performing arts, especially by vocalists and actors. Alexander had problems projecting his voice during performances, but his doctors couldn’t find a physical reason why.

He began practicing monologues in front of mirrors, and noticed he was slouching before he started speaking which led to poor practice and poor performance. He began developing and training himself with a new method focused on awareness of one’s body using mirrors and physical exercises. You don’t need to take classes in Alexander Technique to enjoy the benefits of practicing in front of a mirror, but I would recommend them if you are having particularly painful problems.

These Cello Posture Tips Will Help You in the Long Run

Spending a little time to improve your cello posture, working with your cello teacher to make sure your work is on point, and giving posture attention moving forward is a smart investment for beginning cellists. By taking some time at the beginning, you’ll ensure you develop proper posture moving forward, so you can enjoy a healthy and happy cello career.