Who made your cello? Who carved the body, stained, varnished, and assembled the instrument, including the label visible through the f-hole which bears their signature? Many musicians consider the maker of their instrument, or luthier, a point of pride.

There are famous luthiers, like Stradivari and Guarneri, whose names are synonymous with masterpieces of craftsmanship. These masters innovated many of the standards for modern stringed instruments, and so many luthiers might include on the label “in the style of Stradivarius.” If I had a dollar for every guitar shop owner claiming to own a “genuine Stradivarius fiddle” I could probably afford a genuine Strad.

Modern Production Methods Have Changed How Instruments are Made

Modern production and shipping methods, such as assembly lines and laser carving, have led to an abundance of factory-made instruments which range from very low quality to exceptional quality, sometimes from the exact same process. These instruments are lucky, and by coincidence of material property and mechanical processes become excellent despite being mass produced.

Some manufacturers, such as the Yamaha Corporation, take extra care to ensure their student instruments at least meet educational standards, while also pioneering electric instruments in a way which even famous luthiers could not. This article will look at three models of Yamaha cello and explore everything you need to know about their offering of some of the best mass produced instruments available.

The Beginning of the Yamaha Instrument 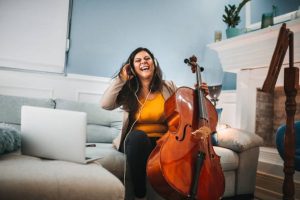 The Yamaha Corporation began in Japan, and has been making musical instruments since the late 1800s. Keyboards are the company’s bread and butter, but they also offer several kinds of stringed instrument.

First we will look at their acoustic student cello, the AVC5 S. This cello comes in four sizes (quarter, half, three-quarter, and full) and conforms to MENC standards. The body is made of spruce and maple wood, and is hand varnished.

Despite the higher standard a Yamaha cello is produced under, you will almost certainly have to have your new cello refitted by a luthier. This can include reshaping or repositioning the bridge over the sound post, adjusting tailpiece tension, and raising or lowering the action of the strings. You should absolutely get better quality strings than the provided D’Addario™ Prelude strings. A good luthier can double the quality of a simple, mass-produced instrument with a simple refitting and new strings.

Thankfully, all you need for a Yamaha electric cello are new strings. These cellos are inarguably much better than the acoustic student series. The big selling point for electric instruments is the ability to practice using headphones without the volume of an acoustic cello, as well as the ability to collapse the instrument for easy storage and travel.

Unlike acoustic instruments which can vary broadly in quality, electric cellos are generally either toys or legitimate musical instruments. The Yamaha cellos are legitimate instruments, and as such, are highly reviewed.

First let’s look at the SVC-110SK Silent Cello. This Yamaha electric cello uses an outline of an acoustic cello body, which can’t be collapsed like many other electric cellos. However, this may be more aesthetically pleasing to the audience, and my personal preference for design as well.

The pegs are traditional pegs which extend perpendicular to the peg box. The sound of the instrument is enhanced by an acoustic chamber feeding into the on-board pre-amp. This pre-amp requires batteries or an external power supply. The 110SK is often reviewed as having the closest feel to an acoustic cello when played, and arguably has the best resonance of any electric cello in its price range. 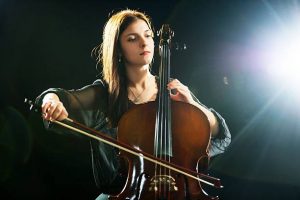 The second Yamaha cello in the electric cello category is the SVC-210SK Silent Cello, a considerable step up from the SVC-110SK. This version does not use the full cello outline, but rather a chest support which can be removed, a bar to simulate the top of a cello’s body, and two extendable bouts for the player’s knees. The pegs are the far superior “worm gear type,” which are mechanical and extend behind the peg box, giving you more room between your neck and the neck of your cello. Mechanical pegs also mean you won’t need to work extra hard to make both the string in tune and the tension hold in the peg box. Similar to the 110SK, the pre-amp uses the acoustic chamber in the body for increased reverberation.

Of the Yamaha cellos mentioned, I would only recommend buying the electric series. Although the acoustic instruments could be lucky and sound well above their price point, it is more likely they will not. Both of the electric cellos are worth their respective prices in the value they bring, with the only major difference being the ability to collapse the 210SK.

Overall, Yamaha is more reliable than most other mass producers, and a Yamaha cello would make a good student instrument. However, if you have a choice you should get an electric 110SK or 210SK rather than the standard acoustic offerings.