Tablature is a form of musical notation that was invented to make reading music easier for fretted and string instruments like guitar, bass, and violin. The premise is operationally-based, meaning that rather than showing rhythm, duration, and pitch, violin tabs will show the player where and when to place their fingers on the instrument.

For an improvising musician, violin tabs allow you to improvise while staying within the chord structure of a song. Tablature-style notation is most commonly used when notating pop music, and is often seen in folk and bluegrass, as well. For the beginning violinist, violin tabs can help you learn positions and individual notes quickly and  efficiently, but ultimately, it’s important to learn to read standard musical notation as well.

Violin tabs directly descended from lute tablature. During the Renaissance and Baroque period, tablature was common. There were three main varieties: French, Italian/Spanish, and German tablature. The French variety was the most popular, and modern-day violin tabs evolved out of this variety.

Tablature was also often used for other instruments during this period. Keyboard tablature was widely used in Germany from the mid-15th century until the mid-18th century. Most music for the lute and other plucked string instruments were originally written in tablature. Many modern players of these baroque instruments still prefer tablature over standard musical notation and often use copies of the original manuscripts, handwritten copies, or modern computer-generated versions of tablature.

Standard musical notation shows the rhythm, pitch, and duration of each note. It may also include dynamics and articulation markings, up- and down-bow markings, and style notations.

Violin tabs, on the other hand, show where and when a finger should be placed to start a note, rather than explicitly showing the note on a staff.  Rhythmically, tablature shows when to start a note, but there is often no notation showing where to stop the sound. As a result, the note duration is often left to the performer.

Also, violin tablature depicts the four strings rather than actual notes. The tablature is laid out from the lowest open note or string on the bottom (the open G) to the highest on the top line (the open E). Numbers are placed on these lines to represent the left-hand fingers on the strings, making it easy for someone who can’t read standard notation to play.

Setting Up the Instrument – Position Markers

In order to use violin tabs, most players like to make “fret” marks on the neck of your instrument with liquid paper or small pieces of tape. These marks indicate where to put your fingers to play specific notes.

On a full-sized violin, the markers should be placed as follows:

When you’ve finished, your violin will have 4 “frets” as shown in the following illustration. 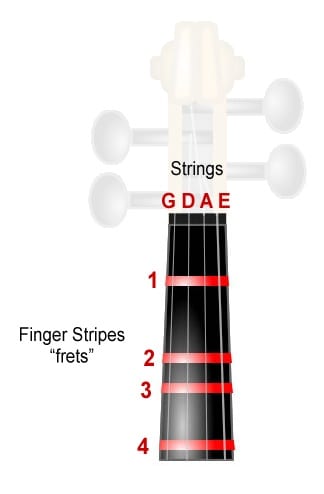 Each fret corresponds with a finger on your left hand.  The finger numbers are 1 for the index finger, 2 for the middle finger, 3 for the ring finger, and 4 for the pinky.  Once you’ve set up your instrument, you’re ready to get started!

Violin tabs make playing the violin much easier. Each song consists of a staff, showing the notes of the song, over a violin tab, showing the finger placement for each note. Here’s an example using the first four measures of “Twinkle Twinkle Little Star”:

The “0” denotes an open string. The 1 on the E string means that you place your first finger on the first fret on the E string, and so on. As you can see from the example, violin tab eliminates the need to read music, and allows you to pick up and play the instrument almost immediately. Learning to read tablature is a good skill to develop if you are interested in playing the instrument quickly. Violin tabs are great for learning certain genres of music like folk, bluegrass, and pop.

There are hundreds of websites online where you can find free violin tabs for a variety of music. If your goal is to learn how to play the violin, tablature is a great way to get started. With some practice you will eventually make the connection between the notes on the staff and the tablature representation.

As you progress in your studies, however, it’s important to learn to read standard musical notation. Tablature can teach you melodies and songs, but to truly get the full range out of any piece of music, you’ll need to learn and understand dynamics, articulation, and stylistic techniques such as vibrato and pizzicato. The best approach is to study with a qualified violin teacher and learn how to truly play the instrument. A good teacher can act as a guide on your musical journey and will work with you to develop your skills – which will truly open you up to the beauty of music!