What is a Stradivarius violin? That’s a great question, and best answered by learning more about the instrument, and looking back to the beginning of violin making. 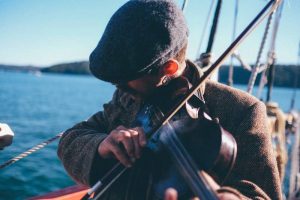 When you think of the violin’s history, it appears shrouded like a creature of myth, whose origins are unknown and who appears only to recipients of divine protection.

Out of these mythological clouds, Stradivari arises, a towering giant and unparalleled master of violin-making never seen before or since, whose instruments were for geniuses like Paganini whose mortal bodies were unable to contain the dubious sources of their mysterious talent.

This image has infiltrated popular culture, inspiring films like The Red Violin, whose famously haunting tune (symbolizing the Red Violin) wound its way through the centuries driving its unhappy owners mad.

Origins of the Violin

Mythology aside, the origins of the violin are difficult to pinpoint and hard to trace, but historians agree that the ancestors of the violin, which first appear in European illustrations around 900 AD, fall into four main categories: the rebec, the medieval or Renaissance fiddle, the lira da braccio, and the viol.

The rebec originates from the bowed Arabic instrument the rebab, probably brought by traders from the Middle East. It had a pear-shaped body carved from a single piece of wood, lateral pegs, and a varying number of strings.

The medieval fiddle had a flat back and sides, a spade-shaped pegbox with vertical pegs and a fingerboard. Around the end of the 15th century, the viol came onto the Italian scene from Spain, and was distinguished by its flat back and upright playing position.

The lira da braccio was shaped much like the violin and held much like it as well though it had seven strings. Two of these ran off the fingerboard and were played as drones. You can see examples of these early instruments in angelic paintings by Gaudenzio Ferrari. Including the fresco in the cupola of Saronno Cathedral (1535).

The early violin evolved from these ancestors through the combination of the physical and musical characteristics of the rebec, medieval fiddle, and lira da braccio. Like its predecessors, the violin served as accompanying instruments for doubling vocal parts or for dancing.1

The Origins of Violin Making 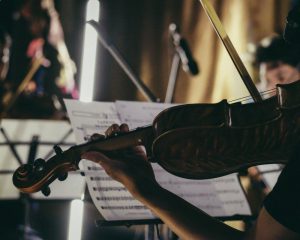 Italy was celebrated for its distinguished violin makers early on. Especially those from Cremona, Brescia, or Venice, of which Stradivari eventually became one of its most celebrated.

Luthier, a term which continues today, originally meant lute-maker, but came to encompass makers of all stringed instruments.

The early violins have carved backs, f-holes, and lateral pegs. You can find examples of these in early European paintings. Shapes and designs varied. A standard form didn’t emerge until Andrea Amati (1500-1577) of the Amati family of violin makers from Cremona.

His design innovations became the basic standard for violin-makers, influencing generations to come, including his pupils, Francesco Rugieri, G.B. Rogieri, and most famously, Antonio Stradivari.

Cremonese contemporaries included the Guarneri family of violin makers, such as Giuseppe Guarneri “del Gesù” (1698-1744), whose fame and violins rival those of Stradivari. He carved his violins with a sense of freedom and haste. This contrasts Stradivari’s consistency and perfection.2

Origins of the Stradivarius Violin

Stradivari created the standardized form of the modern violin by 1710. His innovations dispensed with extraneous designs and decorations, lowered the arch, and incorporated a deeper-colored, redder varnish. Luthiers, scientists, and aficionados have admired, emulated, and analyzed by luthiers, scientists the instruments’ red-gold hue.

Stradivari experimented with his form and design, creating a series of “Long Pattern” instruments in the 1690s. Eventually, he settled on a broader form during his “Golden Period” of 1700 ~ 1725.

His “Messiah” violin of 1716 is an example of this period. It is currently housed in the Ashmolean Museum, and famed for its perfectly new condition. It has remained a collector’s item and thus rarely played, though violinist Joseph Joachim famously praised its beauty of tone.

The violin was kept in Stradivari’s workshop until his death. At that time, it was sold to Count Cozzio di Salabue and afterwards passed on to famed collector Luigi Tarisio in 1827.

How the Stradivarius Violin Design Evolved

Stradivari’s design innovations allowed for a more powerful sound, paving the way for the current role of the virtuoso violin soloist, whose brilliance is capable of projecting above the full sonority of the modern orchestra.

Before the 16th century, the violin functioned more as an accompanying instrument for dances and vocal music. However, its role evolved, it gradually came to the forefront as an indispensable orchestral force and solo instrument.

Parallel to this trend arose the figure of the Italian virtuoso violinist-composer, whose influence radiated outward to other countries. Examples include Fontana, Walther, Corelli, Schmelzer, and Biber, whose pictorial tone painting, instrumental effects, and pyrotechnics like those seen in his “Rosary” sonatas, which rivaled those of the Italian virtuosos.

With the increasing prominence of the virtuoso violinist-composer came the specialization of their roles, so that the composer and performer continued to diverge until they rarely crossed.

Their influence led up to the modern conception of the virtuoso violinist epitomized by the Romantic figure of Paganini. Much like Beethoven casting his long shadow on his contemporaries and successors from Schubert to Schoenberg, Stradivari’s instruments undeniably epitomize a classical ideal of beauty and harmony. And these qualities are still a standard today for many luthiers, and a dream for violinists.

What is a Stradivarius Violin? The Answer isn’t Just an Instrument

1Boyden, David D.  (1965).  The history of violin playing, from its origins to 1761 and its relationship to the violin and violin music.  London, New York:  Oxford University Press