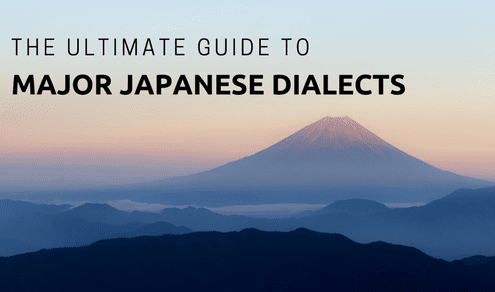 If you live in the United States, you’ve probably noticed that someone from New Jersey doesn’t speak the same way as someone from California. This is because of dialects, or forms of language developed and used in specific regions.

These dialects differ not only in accent but in vocabulary, grammatical structure, and slang (from “y’all” in the South to “hella” in Northern California).

The same is true in Japan. A majority of Japanese students are familiar with the type of Japanese spoken in, and north of, the Kanto region which contains Tokyo. But there are several other Japanese dialects to learn, each with many subsections.

If you’re planning a trip to Japan soon, don’t get caught unprepared! Here are some of the major Japanese dialects you can expect to encounter.

Spoken in: Most of Japan (Hokkaido, Tohoku, and Kanto region; much of Chubu region)

Soon after Japan opened its borders in 1853, the country went through the Meiji Restoration, which united the nation as a major world power. Along with other advancements in society, a standard Japanese dialect was chosen—the one used in Yamanote, a district of Tokyo. Once technology brought about radio and TV broadcasts, this dialect spread quickly throughout the country.

Eastern and Western Japan have long been separated by differences of culture and dialect, similar to the Northern and Southern United States. Because of the geographical separation, a different type of speech developed over time in the old capital, Kyoto, and surrounding areas.

Western Japanese is known for its shortened words, much like southern American English – think of the southern drawl. Here are some examples:

Western Japanese also includes many words with modified syllables, as you can see here:

Unique dialects within Western Japanese include Osaka-ben (spoken in Osaka) and Kyoto-ben (spoken in Kyoto). These two dialects are very similar, which makes it fairly easy for people from Kyoto and Osaka to speak to one another. The cities are only half an hour apart by train.

Spoken in: The island of Kyushu

Kyushu has long been an important part of Japan, especially as an ancient center of relations with China and Korea. Since it’s separated from the main island both culturally and geographically, it makes sense that a new dialect emerged here.

The Kyushu dialects differ so much from each other that it’s difficult to identify specific congruences between them. As a whole, there are many modified conjugation types, shortened words, and alternate words.

There are three unique dialects in Kyushu: Satsugu/Kagoshima, Hōnichi, and Hichiku. Each of these include their own sub-dialects.

SEE ALSO: How Long Does It Take To Learn Japanese?

Spoken in: The island of Okinawa

Some people joke that Okinawa isn’t really a part of Japan, and its controversial history (including annexation by Japan) implies as much. The island is home to several languages that UNESCO now considers endangered as Okinawans lean toward standard Japanese.

Whether or not Okinawan Japanese is actually a Japanese dialect is often debated, so comparing it to Japanese can be quite difficult. It might be safer to think of the two like Italian and Spanish—similar in many ways, but distinct.

Spoken in: Parts of the Chubu prefecture

Since the borders between Eastern and Western Japan are superficial, the dialects tend to mix. This is most evident in areas of Chubu, where two dialects have meshed into something new.

Let’s look at Nagoka-ben, as Nagoya is Chubu’s largest city. Differences are subtler than those between standard and Western Japanese, but they are still obvious to anyone who speaks either dialect. This mostly manifests itself in slight contractions or conjugation modifications.

Considering the dizzying array of Japanese dialects, do you think your current Japanese skills are enough to get you through a trip to Japan without a hitch? If not, consider working with a Japanese tutor to study the dialects of the specific areas you’d like to visit. You’ll be glad you did when you’re able to understand Kansai-ben and Kagoshima-ben!

Post Author: Elaina R.
Elaina R. teaches singing in Ann Arbor, MI. She earned a Master of Music in Voice Performance from the University of Michigan. She is also proficient in multiple languages and speaks Japanese, English, Italian, and German.  Learn more about Elaina here!